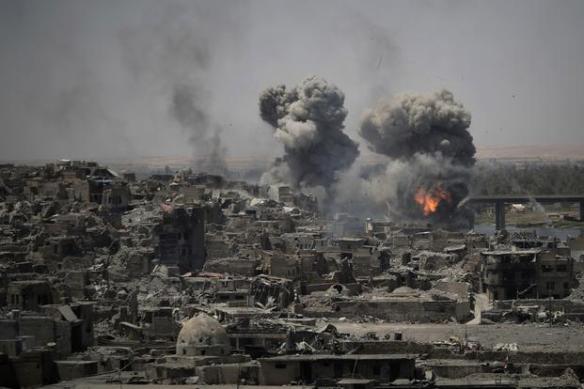 In a perceptive commentary on the ground-breaking investigation by Azmat Khan and Anand Gopal into civilian casualties caused by the US air campaign against Islamic State (Daesh) in Iraq – see also my posts here and here – Robert Malley and Stephen Pomper write:

The Trump administration has celebrated a no-holds-barred approach to the fight against ISIS, given greater deference to ground commanders, loosened restrictions imposed by its predecessor, and expanded the fight to an ever-growing number of Middle Eastern and African theaters. This adds up to a quasi-automatic recipe for greater civilian casualties. Independent monitoring organizations have tracked the numbers, and invariably they point to a serious uptick in civilian deaths in Iraq and Syria since January 2017. The explanation lies partly in the transition in Iraq and Syria toward the final, more urban phase of the conflict in the heavily populated cities of Mosul and Raqqa. But partly only. It also lies in policy guidance, as well as in matters such as tone, attitude, and priorities set at the very top—including by the commander in chief. These have a way of trickling down and affecting performance on the battlefield.

And yet. Those dead civilians that The New York Times found not to have been counted were not counted by the Obama administration. They were not counted by people who were intent on limiting civilian casualties and ensuring transparency. That those safeguards proved inadequate even in the hands of an administration that considered them a priority raises particularly vexing questions.

Part of the problem, as they note, is the nature of the campaign itself.  This is not the sort of counterinsurgency campaign that emerged in Afghanistan and Iraq in which air power was used in support of US and allied ground troops (although we know that also produced more than its share of civilian casualties); neither is it a counterterrorism campaign directed against so-called High Value Targets who supposedly ‘present a direct and imminent threat to the United States’ (ditto; and as I discuss in ‘Dirty dancing’ – DOWNLOADS tab – ‘imminence’ turned out to be remarkably elastic, a deadly process of time-space expansion).
Ultimately, though, their anxieties turn on what they call the ‘over-militarization’ of the US response to al Qaeda and its affiliates and to IS.  They explain, succinctly, what has encouraged this militarized response (not least the lowering of the threshold for military violence allowed by remote operations):

[U]ntil this changes, an increasing number of innocent lives will suffer the consequence. Some will be counted. Others, not. All will have paid a terrible price.

In December the Bureau of Investigative Journalism confirmed an escalation in US air strikes across multiple theatres in Trump’s first year in office:

President Donald Trump inherited the framework allowing US aircraft to hit suspected terrorists outside of declared battlefields from his predecessor, Barack Obama. Bar some tinkering, his administration has largely stuck within the framework set by the previous one.

However, the quantity of operations has shot up under President Trump. Strikes doubled in Somalia and tripled in Yemen [in 2017].

In Afghanistan, where the Bureau has been monitoring US airstrikes since it was officially declared a noncombat mission at the end of 2014, the number of weapons dropped is now approaching levels last seen during the 2009-2012 surge.

Meanwhile, there are signs that the drone war may be returning to Pakistan, where attacks were also up, compared with 2016.

Much remains unclear about these actions, apart from Trump’s signature combination of machismo and ignorance, but we do know that Obama’s restrictions on the use of military force outside Afghanistan, Iraq and Syria have been loosened:

In 2013, Obama introduced measures that meant that strikes in areas of countries that were not active war-zones, such as Pakistan and Yemen, had to go through an elaborate sign-off process with the White House.

The Trump administration effectively side-stepped the restrictions by declaring parts of Somalia and Yemen to be areas of “active hostilities”.

In September NBC reported that the Trump administration was planning to allow the CIA to take a more aggressive role and to give the agency more authority to conduct (para)military operations.  In consequence a comprehensive revision of Obama’s guidelines was in prospect:

The drone playbook, known as the Presidential Policy Guidance, or PPG, includes a provision that no strike should go forward unless analysts determine that there is a near-certainty that no civilians will be harmed. And it includes a provision forbidding the addition of new detainees to the U.S. prison in Guantanamo Bay, Cuba.  The Trump administration is contemplating removing both of those restrictions.

Pakistan remains a nominally covert area of operations.  US drone strikes in the Federally Administered Tribal Areas resumed in March after a nine-month hiatus – though Trump’s latest spat with Islamabad raises questions about the sporadic but systematic co-operation that had characterised so much of the campaign – and (provocatively: again, see ‘Dirty Dancing’ for an explanation) one strike took place outside the FATA in June 2017.  The Bureau’s detailed list is here: five strikes are listed, killing 15-22 people.

In Afghanistan the Bureau noted that air strikes had doubled and that this escalation has been accompanied by a corresponding decrease in transparency (Chris Woods told me the same story for Iraq and Syria when we met in Utrecht). 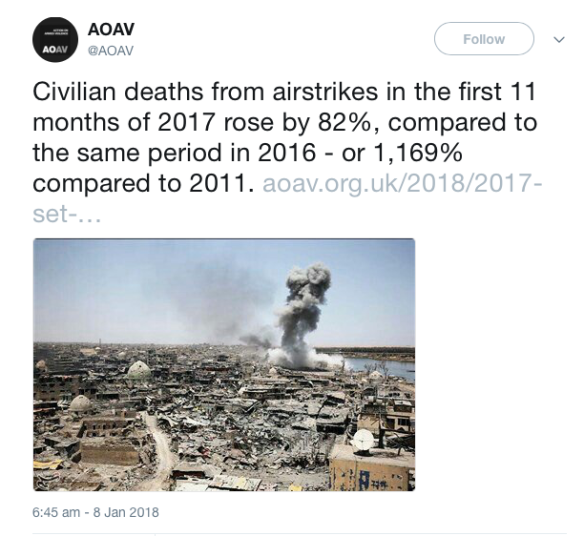 All of this confirms the report released today by Action on Armed Violence.

At least 15,399 civilians were killed in the first 11 months of 2017 according to Action on Armed Violence’s (AOAV) recording of English language media explosive violence events.  This devastating toll – up to the end of November – strongly suggests that 2017 was the worst year for civilian deathsfrom explosive weapons since AOAV’s records began in 2011.

This sharp rise, constituting a 42% increase from the same period in 2016, when 10,877 civilians were killed, is largely down to a massive increase in deadly airstrikes.

Compared to 2011, the first year of AOAV’s recording, the rise in civilians killed by explosive violence in the first 11 months of 2017 constitutes an 175% increase (5,597 died in the same period seven years ago).

On average, our records to November show that there were 42 civilian deaths per day caused by explosive violence in 2017.

For the first time since our recording of all English language media reports of explosive weapon attacks began, the majority of civilian deaths were by air-launched weapons. Of the total civilian deaths recorded (15,399), 58% were caused by airstrikes, mainly in Syria, Iraq and Yemen.

Significantly, as airstrikes are almost always used by State actors, rather than non-State groups, States were responsible for the majority of civilian deaths from explosive weapons for the first time since our records began.

These are stark figures that expose the lie that precision-guided missiles as used by State airforces do not lead to massive civilian harm. When explosive weapons are used in towns and cities, the results are inevitable: innocent children, women and men will die.

In the same vein, Karen McVeigh‘s summary for the Guardian quotes Chris Woods from Airwars:

This is about urban warfare and that’s why we are getting crazy numbers… War is moving into cities. It doesn’t matter whether it’s Russia or the US-led coalition or ground forces leading the assault, the outcome for civilians under attack is always dire…. We’re becoming too complacent about urban warfare, and militaries and governments are downplaying the effects.

I think that’s right, though I also think war is moving back into the cities (if it ever left them); the serial military operations in Mosul and Raqqa are vivid examples of what Chris means, but they also recall the assaults on Fallujah and other cities documented in Steve Graham‘s still utterly indispensable Cities under siege.

The point is sharpened even further if we widen the angle of vision to take in air campaigns conducted by other air forces: the Syrian Arab Air Force and the Russian Air Force in Syria, or the Saudi-led coalition in Yemen.

Yet again, killing cities to save them.  As a spokesperson for Raqqa is Being Slaughtered Silently put it last summer, ‘This is very similar to the Vietnam war, where entire cities were destroyed… What is happening in Raqqa is like dropping a nuclear bomb in stages.’ 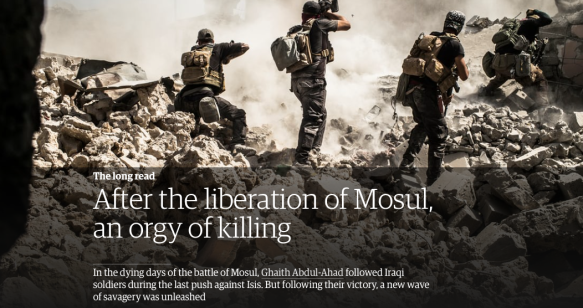 Steve’s work should also remind us that these dead cities are not produced by air strikes alone.  Once reduced to rubble they have often been disembowelled (I can think of no better word) by ground forces; it’s as though these now barely human landscapes compel or at any rate license the continued degradation of both the living and the dead:  see, for example, Kenneth Rosen on ‘The Devil’s Henchmen’ here or  Ghaith Abdul-Ahad‘s chillingly detailed report on the aftermath of the liberation of Mosul here.