Several months ago I was invited to contribute a short essay to Critical Studies on Security, for an ‘Interventions’ section edited by Linda Roland Danil.  Here’s the brief: 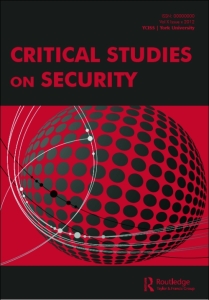 The recent release of a number of critically acclaimed films that involve wars of the 20th century – such as Mel Gibson’s Hacksaw Ridge (2016), and more recently, Christopher Nolan’s Dunkirk (2017) – both of them World War II films – raise questions anew about the representation of war and violence. However, an insufficiently investigated field is the specific embodied experiences of those represented. What is the embodied or “corpographic” (Gregory, 2015) experience of those represented in the films/artistic works/photographs/documentaries/etc. – and therefore what are the specific embodied dimensions of war (McSorley, 2014) that are represented? How do these representations of the embodied dimensions of war preclude the possibility of conceiving of war in a de-realized, surgical, or “virtuous” (Der Derian, 2000) manner? Such embodied experiences may also include the aftermath of war and conflict, such as through the embodied experiences of post-traumatic stress disorder (PTSD). How does an understanding of the embodied experiences of soldiers (as well as the enemy Other) feed into an understanding of the larger geopolitical dynamics at play (Basham, 2013), if at all? This call is seeking Interventions that explore specific visual representations of war and violence in relation to the above and related questions…’

I’ve written about Dunkirk earlier – and I wish I’d said more about the extraordinary, keening sound-track – so in this short essay I returned to the classic US air strike in Afghanistan in February 2010 – see here and here  – and elaborated on the visual rendering of its aftermath by the US military (see here) and in Sonia Kennebeck‘s marvellous National Bird.

2 thoughts on “Eyes in the sky – bodies on the ground”