A new, detailed report from the BBC investigates the Assad regime’s strategic deployment of chemical weapons.  The joint investigation by the Panorama team and BBC Arabic determined ‘there is enough evidence to be confident that at least 106 chemical attacks have taken place in Syria since September 2013, when [President Assad] signed the international Chemical Weapons Convention (CWC) and agreed to destroy the country’s chemical weapons stockpile‘ (my emphasis).

The BBC team considered 164 reports of chemical attacks from September 2013 onwards. The reports were from a variety of sources considered broadly impartial and not involved in the fighting. They included international bodies, human rights groups, medical organisations and think tanks.

In line with investigations carried out by the UN and the OPCW, BBC researchers, with the help of several independent analysts, reviewed the open source data available for each of the reported attacks, including victim and witness testimonies, photographs and videos.
The BBC team had their methodology checked by specialist researchers and experts.
The BBC researchers discounted all incidents where there was only one source, or where they concluded there was not sufficient evidence. In all, they determined there was enough credible evidence to be confident a chemical weapon was used in 106 incidents.

Almost half the documented attacks were in Idlib and Hama; most casualties were recorded in Kafr Zita (in Hama) and Douma (in East Ghouta).  Aircraft were used in almost half the attacks, and the experts consulted by the BBC concluded that in the majority of cases it was overwhelmingly likely that the Syrian Arab Air Force was responsible.  In this connection, it is telling that:

Many of the reported attacks occurred in clusters in and around the same areas and at around the same times. These clusters coincided with government offensives – in Hama and Idlib in 2014, in Idlib in 2015, in Aleppo city at the end of 2016, and in the Eastern Ghouta in early 2018. 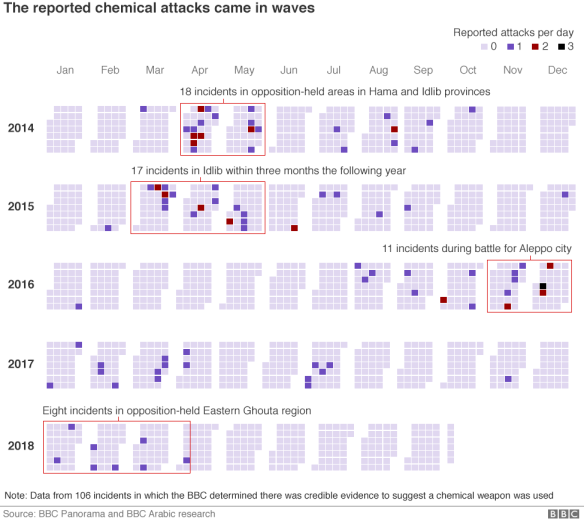 The report pays particular attention to the use of chemical weapons during the offensive against East Ghouta earlier this year – see my detailed analysis here; see also here – and provides a detailed map:

Panorama: Syria’s Chemical War will be broadcast in the UK on Monday 15 October on BBC One at 20:30. It will be available afterwards on the BBC iPlayer. It will also be broadcast on BBC Arabic on Tuesday 23 October at 19:05 GMT.