I’m still on the road, but my series of essays on siege warfare in Syria has not ground to a complete halt: far form it.  Expect more soon, but in the meantime, two reports from the New York Times of considerable importance.

First, the United Nations Independent Commission of Inquiry on Syria confirmed that the siege of eastern Ghouta was marked by war crimes and crimes against humanity:

Dramatically escalating their military campaign to recapture the besieged enclave between February and April, pro-Government forces carried out aerial and ground bombardments which claimed the lives of hundreds of Syrian men, women, and children. By April, numerous homes, markets, and hospitals had been all but razed to the ground, amounting to the war crimes of launching indiscriminate attacks, and deliberately attacking protected objects.

In an effort to avoid the bombardments, terrified civilians relocated to makeshift basement shelters in February, where they subsisted for months underground in dire circumstances.

“It is completely abhorrent that besieged civilians were indiscriminately attacked, and systematically denied food and medicine,” said Commission Chair Paulo Pinheiro. “What is clear from the terminal phase of this siege is that no warring party acted to protect the civilian population”, he continued.

Through the widespread and systematic bombardments of civilian inhabited areas and objects in eastern Ghouta, and the continued denial of food and medicine to besieged civilians during the period under review, pro-Government forces perpetrated the crime against humanity of inhumane acts causing serious mental and physical suffering, the report finds.

“Even if pro-Government forces are bombing and starving the civilian population of eastern Ghouta into submission, there can be no justification for the indiscriminate shelling of civilian inhabited areas in Damascus”, said Commissioner Hanny Megally. “Such actions by armed groups and members of terrorist organisations also amount to war crimes.”

The report notes that, by the time Government forces declared eastern Ghouta successfully recaptured on 14 April, some 140,000 individuals were displaced from their homes, tens of thousands of whom are being unlawfully interned by Government forces in managed sites throughout Rif Damascus.

“The blanket internment of all civilians who fled eastern Ghouta through humanitarian corridors, including women and children, is reprehensible,” said Commissioner Karen Koning AbuZayd. “In many instances, the on-going internment of these individuals amounts to arbitrary deprivation of liberty, and the unlawful confinement of tens of thousands of individuals,” she continued.

Pursuant to local truces and “evacuation agreements”, up to 50,000 civilians from eastern Ghouta were displaced to Idlib and Aleppo governorates, none of whom were provided aid by the Syrian Government.

The report also states that the cumulative physical and psychological harm wrought by the five-year siege continues to impact negatively hundreds of thousands of Syrian men, women, and children countrywide.

I’ve taken that summary from a press release on 20 June; the full report will be presented today, and you can download it here. (scroll down).

I’ll have more to say about this report when my series resumes, but what is important for now is that – according to a report by Maggie Haberman and Rick Gladstone for the New York Times – details of two chemical attacks were drastically reduced:

In another attack, Syrian forces dropped a chemical bomb on the top-floor balcony of an apartment building, killing 49 people, including 11 children. Their skin turned blue.

These details and others blaming Syria for atrocities in eastern Ghouta, a suburb of Damascus, were uncovered by a United Nations commission investigating and documenting possible war crimes in the seven-year-old conflict. But when the commission issued a report on Wednesday, the details were omitted.

Seven pages that had been in an earlier draft, provided to The New York Times, were summarized in two paragraphs in the final document…

The materials in the leaked draft paint a far more frightening picture of chemical weapons use in eastern Ghouta than had been previously reported. And they assert without qualification that Syrian forces and their allies were responsible, rebutting repeated denials by Mr. Assad’s government and his backers in Russia and Iran.

One of those attacks was the assault on Douma on 7 April that I discussed in detail in Gas Masques.  The NYT report explains:

On April 7, the draft said, an improvised explosive delivered from the air hit a multistory residential building roughly 200 yards from the Rif Damascus Hospital, the last functioning hospital in Douma.

The draft described the explosive as a “single industrial gas cylinder” with fins that struck the top-floor balcony and appeared to have “rapidly released large amounts of a substance into the interior space of the residential apartment building.”

“Positions and physical symptoms displayed by victims of the attack support witness claims that the agent acted rapidly,” the draft stated, “and likely indicate that a high concentration of the chemical sank downwards.”

Based on witness statements and “material evidence received and analyzed by the Commission,” the draft stated, the dead showed “an array of symptoms consistent with exposure to a choking agent, including signs of foaming at the mouth and nose, blue skin indicating impaired blood circulation, meiosis (constriction of the pupils), as well as some cases of dilated (wide open) pupils.”

“Statements and material evidence received and analysed by the Commission in relation to the deceased within the apartment building revealed an array of symptoms consistent with exposure to a choking agent, including signs of foaming at the mouth and nose, blue skin indicating impaired blood circulation, meiosis (constriction of the pupils), as well as some cases of dilated (wide open) pupils. Numerous victims unable to flee the building collapsed shortly after exposure.”

All of this is a vital preface to a second report from the New York Times: a reconstruction of the attack on that apartment building presented in Augmented Reality here. 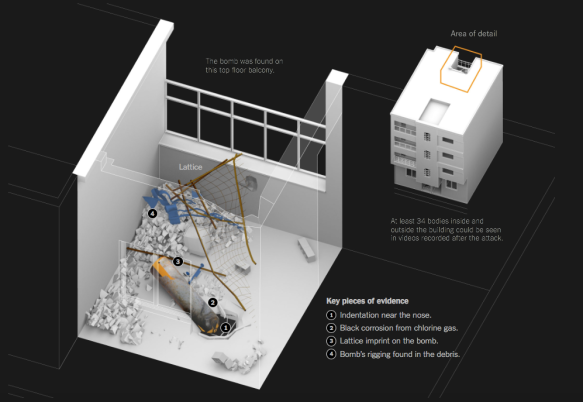 The still above will probably look familiar to regular readers, because the reconstruction relies in large measure on the work of Eyal Weizman‘s Forensic Architecture agency and contributions from Eliot Higgins‘s Bellingcat (the image at the head of this post is taken from one of its tweets. ) The NYT again:

We were unable to visit Douma. But to get to the truth of what happened, we forensically analyzed the visual evidence unwittingly provided by the Russian reports. Combining those pictures with other videos filmed by Syrian activists, we reconstructed a 3-D model of the building, the balcony and the bomb, in partnership with Goldsmiths, University of London research agency, Forensic Architecture.

The reconstruction brought a virtual crime scene to us. We could inspect how the bomb related to the trove of visual evidence around it, the debris strewn across the balcony, the bomb’s design, the architecture of the rooftop, the damage inscribed on the bomb’s casing, the hole punctured in the roof, and how the bomb penetrated into the room beneath.

Key pieces of evidence indicate that this bomb was not planted, as officials claimed, but dropped from a Syrian military helicopter. The evidence supports chlorine was involved. And it affirmed when it happened — on the evening of April 7, a time frame that is consistent with witness reports and interviews of that day.

The analysis confirms the narrative I set out in Gas Masques, but adduces several other evidentiary or inferential details.  In particular, it reveals that the apartment building (lower left in the diagram below) was located on a street that was regularly used by ambulances ferrying casualties to reach an underground tunnel that gave access to the only functioning hospital in Douma (upper right) – and may have been attacked for that very reason. 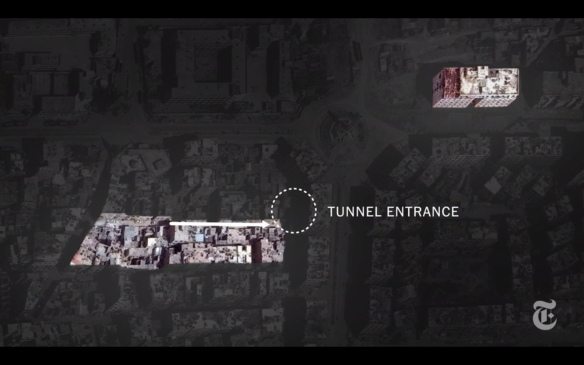 The reconstruction that follows included: geo-locating the building and plotting the locations of 34 victims on two floors and the stairwell (below) –

– analysing imagery of the bomb and its residues and fragments from cellphones and from video broadcast by Russian and Syrian agencies to show that the bomb had been rigged to fall from a helicopter (a standard tactic), a finding that reinforces the observed flightpaths from Dumayr Air Base that evening –

– and, finally, devastating film of the victims whose bodies, so experts confirmed, exhibit signature symptoms of exposure to chlorine gas at highly concentrated levels.  They do not rule out the use of other chemical agents, but they also conclude that the casualties did not die from a conventional weapons attack (see my discussion of Robert Fisk‘s reporting in Gas Masques) and neither were they somehow staged (I also discuss this in detail in that same essay).

Many of the victims had been sheltering the in the basement from the bombardment; smelling chlorine, the report concludes, they ran up the stairs towards the top floors of the building – the usual response, since chlorine is heavier than air – not knowing that the gas had been released from a bomb on the roof….

It’s an appropriately corrosive report, and you can watch the full 12-minute video here.  Please do.

1 thought on “Scenes of crimes”