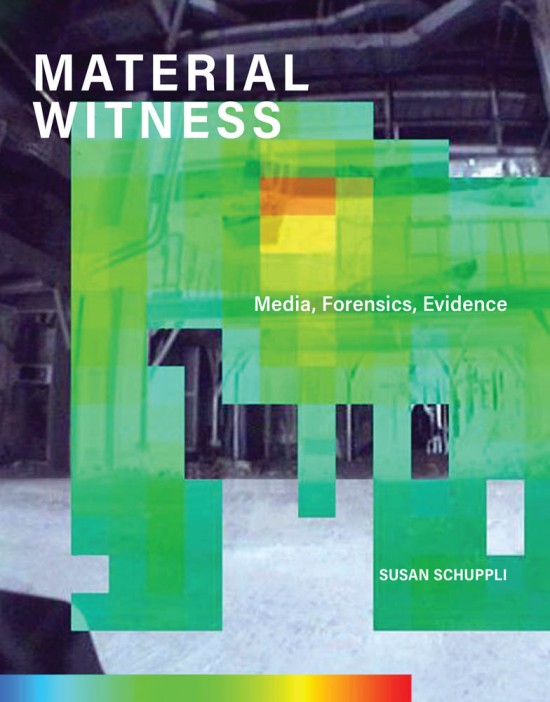 A new book from the wonderful Susan Schuppli – I was going to say ‘of Forensic Architecture‘ fame, except that her work involves so much more than that!  You can see both her entanglements with forensic architecture and the ‘so much more’ on full display in Material Witness: media, forensics, evidence (MIT Press):

In this book, Susan Schuppli introduces a new operative concept: material witness, an exploration of the evidential role of matter as both registering external events and exposing the practices and procedures that enable matter to bear witness. Organized in the format of a trial, Material Witness moves through a series of cases that provide insight into the ways in which materials become contested agents of dispute around which stake holders gather.

These cases include an extraordinary videotape documenting the massacre at Izbica, Kosovo, used as war crimes evidence against Slobodan Milošević; the telephonic transmission of an iconic photograph of a South Vietnamese girl fleeing an accidental napalm attack; radioactive contamination discovered in Canada’s coastal waters five years after the accident at Fukushima Daiichi; and the ecological media or “disaster film” produced by the Deep Water Horizon oil spill in the Gulf of Mexico. Each highlights the degree to which a rearrangement of matter exposes the contingency of witnessing, raising questions about what can be known in relationship to that which is seen or sensed, about who or what is able to bestow meaning onto things, and about whose stories will be heeded or dismissed.

An artist-researcher, Schuppli offers an analysis that merges her creative sensibility with a forensic imagination rich in technical detail. Her goal is to relink the material world and its affordances with the aesthetic, the juridical, and the political.

Susan’s own, endlessly interesting web page is here, which includes links to some of her writing here.