I’ll be travelling for the next several weeks so postings will probably be light until the end of the month. I’ll be spending most of my time in North Africa and Eastern Europe, with a stop-over at King’s College London for a seminar in Geography & War Studies (another outing for “Gabriel’s Map”, and I’m really looking forward to the discussion).

This means I’ll miss the Annual Meeting of the Association of American Geographers which starts today, but I thought readers would like to know about an event billed as “the one and only Human Geography event in the nation“… Really.  It takes place in Arlington, Virginia next month, and like its counterpart last year is organised by the Institute for Defense & Government Advancement. 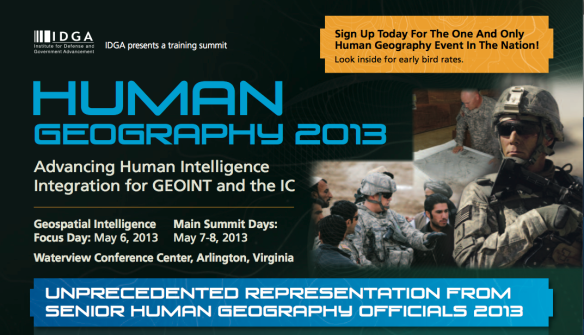 With an annual operating budget of $18 billion, DoD Military Intelligence programs have been instrumental in the war on terror. Human Geography has been at the forefront of these intelligence programs, often embodied in the Human Terrain Systems program which, with successful implementation, has recently increased from 22-31 operating teams in Afghanistan. In order for the US Military to operate in theatres where conventional warfare is not effective, Human Geography must be readily understood and utilized.

In advancing Human Geography, we must look too increased socio-cultural and language training to provide accurate and reliable data generated by on-the- ground research on the specific social groups in the supported unit’s operating environment. IDGA holds this event to service as a platform for you to learn about these areas through expert presentations from the CENTCOM, USMC Center for Irregular Warfare and the Air Force Culture and Language Center and as well as many other key players in the field.

It’s an interesting and innovative time in the implementation of human geography into the Intelligence Community and Special Operations Warfare. Come participate in defining the future of the US military, and establish yourself in this exciting field at the only Human Geography event this year.

More information and the full brochure here.  For readers concerned at the escalating costs of conferences, an all-access pass for this three-day event comes in at $1, 498.

As I said last year, another meeting, and for the most part another geography.  But I do recognise one speaker, Alex Murphy, who is down to lead a session on ‘Using GEOINT for mapping and battlefield visualization’.