Over at Space and Politics my friend and colleague Gaston Gordillo has a long post, ‘Opaque zones of empire’, in which he seeks to examine ‘the panoptic regime of hyper-visibility by focusing not on the prying cameras of drones and satellites but on the rugged topographies they permanently scrutinize; not on what the panoptic regime sees but on what it cannot see, or what it cannot see clearly.’

This is the paper he gave as part of the Space and Violence sessions at the Association of American Geographers conference in L.A. earlier this year, and it’s the draft of a longer article in progress.  It’s also a remarkably ambitious exercise, in which Gaston artfully tracks between Stuart Elden, Eyal Weizman, Henri Lefebvre, Alain Badiou, Allan Feldman and a host of others.

But it’s the conclusion that has given me most pause for thought.  Here Gaston conjures the opacity inherent in the three-dimensionality of terrain (the central concept in the essay) apprehended by military vision and violence:

‘Badiou argues that the figure of the pure multiplicity of being, precisely because its multiplicity cannot be represented, is the void. The void is, indeed, the figure of the terrain. This void should be read not as an abstraction but in its spatial and bodily immanence: through the vertigo that the vast, opaque, three-dimensional, and not fully visible geographies of the planet create in the human body. This is the void graphically represented, for instance, on Tim Hetherington’s documentary Restrepo, where US soldiers stationed in an outpost in the Korengal Valley in eastern Afghanistan felt haunted by the terrain they were immersed in. In the film, those soldiers make it clear that those opaque mountains, forests, and valleys were for them a hostile immensity that turned insurgents into a ghostly presence. Those mountains constitute a tangible void within Empire: one of the countless outsides of a world without outside.

I’m particularly taken by this image (which I think is much clearer in the film than in Sebastian Junger‘s War) because it’s helped me think about how my work on ‘the natures of war’ intersects with my work on later modern war in the mountains of Afghanistan and Pakistan.

I only have room for one example.  To US infantry in the rainforest and highlands of Vietnam, terrain was not only (or even primarily) apprehended visually: in contrast to staff officers poring over maps and air photographs and to the crews of combat helicopters and strike aircraft flying over the jungle, terrain was made known – a knowledge that was always precarious, that could always become undone – through the body itself and all its senses, including hearing, touch and smell. Terrain is more than a visual construct, especially in its three-dimensionality, and there is nothing ‘dead, passive, fixed’ about it. Michael Herr captured something of what I have in mind in a passage that loops back to Gaston’s coda: 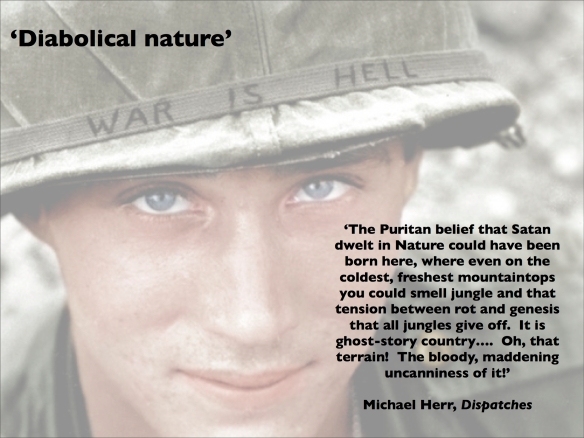 This unheimlich nature, ‘diabolical nature’ in what Gaston calls its ‘hostile immensity’, had a Janus-face.  On the one side it was a cyborg nature, no longer wholly ‘natural’ (even as the rainforest was rendered excessive or fallen through the standard tropes of tropicality) because it had been mined, booby-trapped and honeycombed with tunnels.  In The natures of war I develop this argument in more depth than I can here, in relation not only to the ‘jungle’ but also to the mud of the Western Front in World War I and to the sand and stone of the Western Desert in World War II, which both became cyborg natures or, if you prefer, techno-natures.  Here are two slides from that presentation, which summarise what I mean about the corporeality of knowledge and the techno-nature of the war in Vietnam: 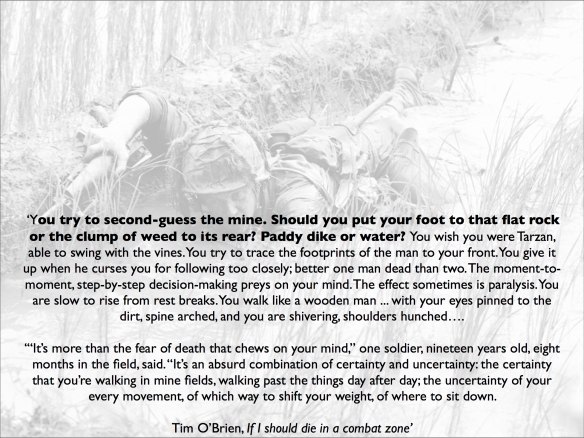 Yet on the other side there was also something exculpatory about it all.  Recalling a similar argument developed by Michael Taussig in a different context in Shamanism, colonialism and the wild man, here’s Philip Caputo again:

 ‘Scorched by the sun, wracked by the wind and rain of the monsoon, fighting in alien swamps and jungles, our humanity rubbed off of us as the protective bluing rubbed off the barrels of our rifles.We were fighting in the crudest kind of conflict, a people’s war. It was no orderly campaign, as in Europe, but a war for survival waged in a wilderness without rules or laws.’

And again, in a passage that makes the geography of this hostile terrain clear (and also speaks directly to Gaston’s argument about Restrepo – and even to Carl Schmitt):

In that last slide I’ve deliberately juxtaposed Caputo’s apologia with Art Greenspon‘s famous photograph of soldiers from the 101st Airborne waiting to be evacuated by helicopter after a five-day patrol near Hue, South Vietnam in April 1968 because – as those upheld arms imply – this confession carries buried within it a promise of redemption too.  Forgive me, for this fallen nature has cast me down.  And help me escape back into The World.  Yet, as Taussig showed, this too was a thoroughly imperialist catechism: primeval nature fouling our civilised, ‘second nature’, seducing and destroying our very humanity, when in so many ways it was our own ‘second nature’ and its technowar that was laying waste to the rainforest.

These are complex arguments, and a post like this inevitably runs the risk of caricature.  But I hope I’ve said enough to suggest some of the other ways in which the ‘opaque zones of empire’ extend beyond the horizon of vision.  And in case I haven’t been clear, I should add that I think Gaston is absolutely right to make terrain central to the analysis, not least because this makes it possible to invest two other master-concepts (sic), ‘space’ and ‘nature’, with corporeal and material depth.

3 thoughts on “Terror and terrain”