Some more forensic geography from Human Rights Watch (I’ve long though that some of the very best human geography is produced by organisations like HRW).

Attacks on Ghoutta (22 pp) analyses the chemical weapons attacks on the suburbs of Ghoutta on 21 August 2013.  Here is the Executive Summary:

This report details two alleged chemical weapons attacks in Syria on the opposition-controlled Damascus suburbs of Eastern and Western Ghouta, located 16 kilometers apart, on the morning of August 21, 2013. The attacks killed hundreds of civilians, including large numbers of children. Human Rights Watch analyzed witness accounts of the rocket attacks, information on the likely source of the attacks, the physical remnants of the weapon systems used, and the medical symptoms exhibited by the victims of the attack as documented by medical staff. 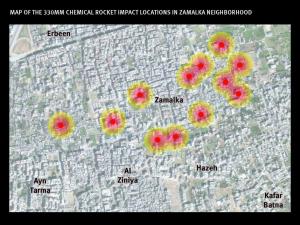 Our investigation finds that the August 21 attacks were likely chemical weapons attacks using a surface-to-surface rocket system of approximately 330mm in diameter—likely  Syrian-produced—and a Soviet-era 140mm surface-to-surface rocket system to deliver a nerve agent. Evidence suggests the agent was most likely Sarin or a similar weapons-grade nerve agent. Three local doctors told Human Rights Watch that victims of the attacks showed symptoms which are consistent with exposure to nerve gas, including suffocation; constricted, irregular, and infrequent breathing; involuntary muscle spasms; nausea; frothing at the mouth; fluid coming out of noses and eyes; convulsing; dizziness; blurred vision; and red and irritated eyes, and pin-point pupils.

The evidence concerning the type of rockets and launchers used in these attacks strongly suggests that these are weapon systems known and documented to be only in the possession of, and used by, Syrian government armed forces. Human Rights Watch and arms experts monitoring the use of weaponry in Syria have not documented Syrian opposition forces to be in the possession of the 140mm and 330mm rockets used in the attack, or their associated launchers.

The Syrian government has denied its responsibility for the attack, and has blamed opposition groups, but has presented no evidence to back up its claims. Based on the available evidence, Human Rights Watch finds that Syrian government forces were almost certainly responsible for the August 21 attacks, and that a weapons-grade nerve agent was delivered during the attack using specially designed rocket delivery systems. The scale and coordinated nature of the two attacks; against opposition-held areas; the presence of government-controlled potential launching sites within range of the targets; the pattern of other recent alleged chemical weapon attacks against opposition-held areas using the same 330mm rocket delivery system; and the documented possession of the 140mm and 330mm rocket systems able to deliver chemical weapons in the government arsenal—all point towards Syrian government responsibility for the attacks.

Human Rights Watch has investigated alternative claims that opposition forces themselves were responsible for the August 21 attacks, and has found such claims lacking in credibility and inconsistent with the evidence found at the scene. Claims that the August 21 deaths were caused by an accidental explosion by opposition forces mishandling chemical weapons in their possession are inconsistent with large numbers of deaths at two locations 16 kilometers apart, and documentation of rocket attacks on the sites that morning, as evidenced by witness accounts, the damage visible on the rockets themselves, and their impact craters.

HRW used a range of sources to conduct its analysis-from-a-distance, including Skype interviews, video and photographic footage, and satellite imagery, and consulted with scientific experts on chemical warfare, key analysts from its own Arms Division and independent arms experts. I rehearse all this because when HRW carried out its searching analysis of the unlawful use of white phosphorus by the Israel Defense Force in Gaza, Rain of Fire, a forensic analysis that was cited multiple times in the Goldstone report, the defenders of the IDF (there’s a phrase) unleashed a desperate campaign to discredit HRW’s expert Marc Garlasco.  You can find a discussion in Eyal Weizman‘s The least of all possible evils (see also here). This time round, of course, the government of Israel has joined the (I think convincing) chorus identifying the Syrian Army as the culprits: but it will be interesting to see whether it has also been magically converted to the propriety of HRW’s forensic analysis.

I link the two reports for a second reason, which is the disgracefully selective and self-serving nature of the ‘humanitarian’ condemnation of chemical weapons.  Here is President Obama speaking yesterday:

‘…the world saw in gruesome detail the terrible nature of chemical weapons, and why the overwhelming majority of humanity has declared them off-limits — a crime against humanity, and a violation of the laws of war.’

He conceded that this wasn’t always the case:

‘In World War I, American GIs were among the many thousands killed by deadly gas in the trenches of Europe. In World War II, the Nazis used gas to inflict the horror of the Holocaust. Because these weapons can kill on a mass scale, with no distinction between soldier and infant, the civilized world has spent a century working to ban them. And in 1997, the United States Senate overwhelmingly approved an international agreement prohibiting the use of chemical weapons, now joined by 189 governments that represent 98 percent of humanity.

On August 21st, these basic rules were violated, along with our sense of common humanity.’

But what a selective mobilisation of history, in which the US rises from victim to saviour.  Now I agree that the use of chemical weapons in Syria is vile – but so too was  Israel’s use of white phosphorus in Gaza ( in the same speech Obama reaffirmed the US’s “unshakable support” for Israel), the US-led coalition’s use of depleted uranium munitions in Iraq (which goes back to 1991; see also Omar Dewachi on ‘the toxicity of everyday life’ here), Iraq’s use of nerve gas against Iran in 1988 (in which we now have proof that the US was complicit), the US deployment of chemical herbicides in Vietnam, Laos and Cambodia… the list goes on and on.

And this brings me to my third (no less obvious) observation: showing who used chemical weapons is a far cry from knowing what to do about it – especially when the network of responsibility and complicity is so hideously extensive.

Update: I’ve been so busy trying to finish two desperately overdue essays and to prepare for the start of a new term (I’ve posted the new outlines for my undergraduate and graduate courses under the TEACHING tab) that I haven’t had a chance to return to my reading of Théorie du drone, but I’m determined to do so very soon.