I’m sorry for the long silence: the past two weeks have been unusually busy, with a stream of wonderful visitors to the Peter Wall Institute for Advanced Studies, including Philippe Descola, Anne-Christine Taylor and Bruno Latour.  More on this soon, but during a series of conference presentations – in which, more or less in passing, I mentioned Joshua Oppenheimer‘s The act of killing (2012) (see here and here) – I was told of another, related project that readers will find interesting.

This is Yael Hersonski‘s A Film Unfinished [Shtikat Haarchion] (2010).  The centre of the documentary – you can hardly say its ‘heart’ – is an unfinished propaganda film shot by the Nazis in 1942, Das Ghetto, which purported to portray the Warsaw Ghetto.  It was found in an archive in East Germany in 1954, but in 1988 two discarded film cans containing 30 minutes of outtakes were discovered – scenes left on the cutting room floor – which radically transformed the interpretation of the film and revealed the elaborate staging of its scenes.  You can obtain another overview of the project here, which includes a number of stills from A Film Unfinished. 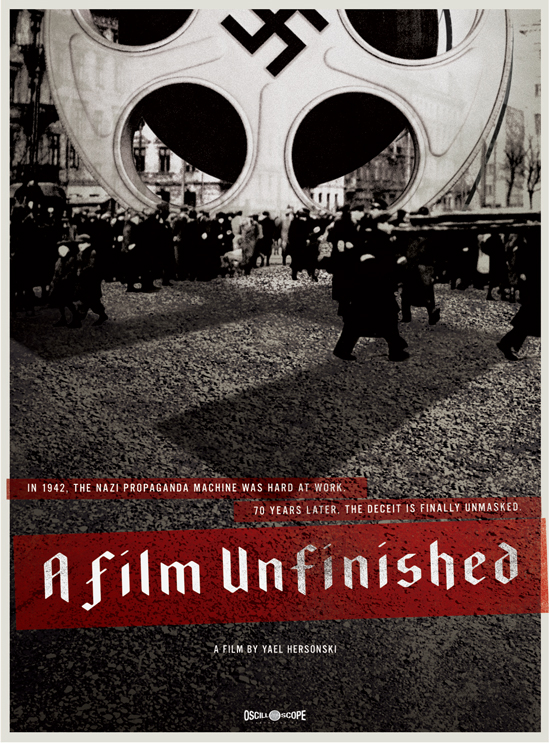 The parallel with Oppenheimer’s project is drawn by Hersonski’s re-staging of an interview with one of the original cameramen, Willy Wist (he died in 1999 but Hersonski works from a transcript she found by chance in an archive in Ludwigsburg), and by her decision to invite five survivors of the Ghetto to watch the out-takes and to record their reactions.

This is from Jeannette Catsoulis‘s thoughtful review in the New York Times:

“What if I see someone I know?” one woman asks [she does], hardly daring to look. As the flickering atrocities play across the survivors’ faces — one film observing another — Ms. Hersonski silently creates space for memories. More than just valuable reality checks (“When did you ever see a flower? We would have eaten a flower!”), these recollections anchor the past to the present, and the images to human experience, in a way that shifts our perception of the Warsaw film. Whether cringing at the sight of naked men and women being forced at gunpoint into a ritual bath, or contemptuously dismissing the Nazis’ efforts to highlight Jewish privilege (“My mother wore her beautiful coat, and sometimes a hat. So what?”), the survivors seem to speak for those who cannot.

Here is the trailer.  The whole film is available on YouTube but I can’t embed it because it has a restricted rating, so you need to confirm you are old enough to watch it: here.

Catsoulis suggests that the film is concerned with the difference between watching and seeing, and in this sense the other obvious parallel is with Giorgio Agamben‘s philosophico-ethical probings of the witness and the camp.  Hersonski herself says that her film ‘first emerged out of my theoretical preoccupation with the notion of the “archive”, and the unique nature of the witnessing it bears.’ (She elaborates this in an interview with Max Goldberg here and there is also a really excellent interview with Lalev Melamed, ‘A Film Unraveled’, in the International journal of politics, culture and society 26 (13) 9-19, which includes an interesting comparison between Hersonski and Harun Farocki).

Witnessing is of more than historical significance, of course, and in an extended interview with Clyde Fitch – in which he asks her about complicity and guilt – Hersonski deflects his question from the past to our own present:

I’m asking myself a different question. I’m asking myself: What is my ethical position when I’m sitting very comfortably in my living room and seeing whatever is happening a few kilometers from my city in the occupied territories?…

What can I do? No, it’s not a rhetorical question. I’m seeing this and other events unfold — I’m watching it, I know about it, I know it’s there. I’m not talking about politics right now, by the way, just images of people suffering. And, as the images of people suffering in my own country go, you become a witness. Then what do you do as a witness? It’s a terrible question — it’s a haunting, torturing question. It’s our essential question.

I think that it was also a major reason why I made this film — because the Holocaust not only confronted humanity with an inconceivable horror but it also did mark the very beginning of the systematic implementation on film of that horror. And I think that something changed in our perception — I don’t know even how to define this something — after we saw images from the camps, something that we hadn’t witnessed before. It seems that documentation became more technically advanced, more massive, since then.

Well, as long as this bombardment of images becomes more intense, we will become more and more incapable of really seeing suffering, or war.

Fitch describes the film as ‘an act of anthropology’ – something which our three guests at the Wall would surely recognise too.