As most readers will know, there has been a lively debate – at once profoundly philosophical and intensely practical – about what counts as a ‘grievable’ (and indeed survivable) life after military and paramilitary violence, and on the calculus of war-time casualties.

Two reports released yesterday conclude that recording and analysing data on the casualties of conflict and armed violence (both those killed and those who survive their wounds) can improve the protection of civilians and save lives.  The first, by Action on Armed Violence, is called Counting the Cost and surveys ‘casualty recording practices and realities around the world’: 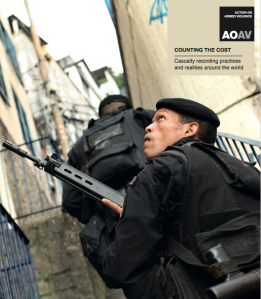 The AOAV report shows that transparent and comprehensive information on deaths and injuries can protect civilians and save lives. The numbers of casualties have always been a contentious issue, generally dominated by secretive counting criteria, and public numbers that have been dictated more by political agendas than evidence. In other cases, the arguments have been dictated simply by the use of different estimating techniques. An example in this sense has been the debate on the total number of people that were killed during the Iraq War between Iraq Body Count and a survey published in the Lancet medical journal. The Lancet estimated over 650,000 deaths due to the war, more than 10 times the number of deaths estimated by the Iraq Body Count for the same period. A series of articles arguing for one or the other have highlighted how different systems to estimate number of deaths can lead to very different end results.

What the AOAV new report confirms is that when transparency both in the numbers produced as well as the techniques used to record them are clear and public, the debates around these numbers can be overcome. For Serena Olgiati, report co-author, “transparency makes it clear that this data is not a political weapon used to accuse opponents, but rather a practical tool that allows states to recognise the rights of the victims of violence.”

I have a more reserved view about a ‘transparent’ space somehow empty of politics – and we all know what the first casualty of war is – but the report is more artful than the press release suggests: it begins by invoking Walter Benjamin on Klee’s Angel of History:

“There is a painting by Klee called Angelus Novus. It shows an angel who seems about to move away from something he stares at. His eyes are wide, his mouth is open, his wings are spread. This is how the angel of history must look. His face is turned toward the past. Where a chain of events appears before us, he sees on single catastrophe, which keeps piling wreckage upon wreckage and hurls it at his feet. The angel would like to stay, awaken the dead, and make whole what has been smashed. But a storm is blowing from Paradise and has got caught in his wings; it is so strong that the angel can no longer close them. This storm drives him irresistibly into the future to which his back is turned, while the pile of debris before him grows toward the sky. What we call progress is this storm1.

The philosopher Walter Benjamin wrote these words in 1940 as he saw Europe engulf in flames. Within the year he had taken his own life on the French-Spanish border, the threat of deportation to a Jewish concentration camp seemingly too great for him to bear.

They are words that resonate as much today as they did then. Syria is engulfed in flames, Iraq descends back into the abyss and gun violence takes thousands of lives a week. The single catastrophe the Angelus Novus sees in the 21st century has to be the terrible harm caused by armed violence, a harm estimated to take over half a million lives a year.

Seeing this harm in its entirety is a gruelling task. Recording the true toll of armed violence reveals hard truths: it tells of underlying prejudices, of racism, of sexism: humanity’s ugliness. But only by turning behind us and calculating how many people have died and have been injured in a conflict, in a slum area, in a city in the grip of violence, can we ever begin to address the impact that armed violence has.

The report provided an analytical overview and a series of case studies (Colombia, Thailand and the Phillipines).

The second report is from the Oxford Research Group and is part of its Every Casualty program (see my post here).  In this report the ORG reviews the United Nations and Casualty Recording:

It concludes that when the UN systematically records the direct civilian casualties of violent conflict, and acts effectively on this information, this can help save civilian lives. However, casualty recording is not currently a widespread practice within the UN system.

The report recommends that the advancement of casualty-recording practice by the UN in conflict-affected countries should be pursued, as this would have clear benefits to the work of a range of UN entities, and so to the people that they serve.

This report looks at experiences of, and attitudes towards, casualty recording from the perspectives of UN staff based in New York and Geneva that we interviewed. It includes a case study of UN civilian casualty recording by the UN Assistance Mission in Afghanistan’s Human Rights unit. Finally, the report discusses challenges to UN casualty recording, and how these might be met.