In March 2011 members of a Mexican drug cartel tortured and murdered a young student, Juan Francisco Sicilia Ortega, along with six of his friends in the city of Cuernavaca in Morelos.  His father, Javier Sicilia (right), poet, professor and journalist, later told Time:

‘When I got to Cuernavaca… I was in a lot of emotional pain. But when I arrived at the crematorium I had to deal with the media. I asked the reporters to have some respect; I told them I’d meet them the next day in the city plaza. When I got there I found they’d put a table [for a press conference] out for me, and I realized this was going to be bigger than I’d anticipated.

‘I had never thought of starting a movement or being a spokesman for anything. I’m a poet, and poets are better known for working with more obscure intuitions. But in those moments I was reminded that the life of the soul can be powerful too. My chief intuition then was that we had to give name and form to this tragedy and somehow put that into action with real citizens as a way to tell the government, “We need something new, especially new institutions to fight our lawlessness and corruption and impunity, not just that of the drug cartels but the state.”‘ 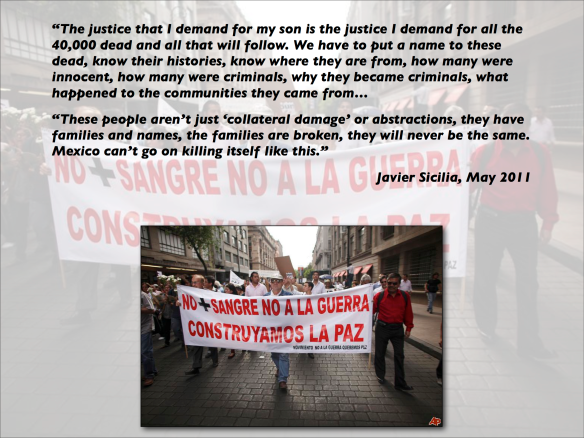 Sicilia’s demand (above) started the Movement for Peace with Justice and Dignity (“Haste la Madre!”), but the call to abjure the aggregations and anonymizations of mass violence – by state and non-state actors – has been taken up in other political arenas too.

It’s in this spirit that I read the Open Society‘s detailed listing of 136 people who were subjected to secret detention or extraordinary rendition by the CIA. 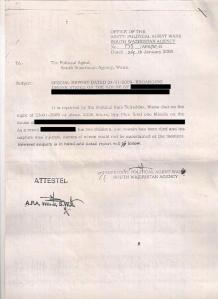 And now – to turn to a program that is in many respects the flip side of extraordinary rendition (assuming a dark side can have another dark side) – the Bureau of Investigative Journalism in London has announced an ambitious campaign to identify and name all the victims of US-directed air strikes in Pakistan.

‘Part of the justification for the US carrying out drone strikes without consent is their reported success. And naming those militants killed is key to that process. Al Qaeda bomber Fahd al-Quso’s death was widely celebrated.  Yet how many newspapers also registered the death of Mohamed Saleh Al-Suna,  a civilian caught up and killed in a US strike in Yemen on March 30? By showing only one side of the coin, we risk presenting a distorted picture of this new form of warfare. There is an obligation to identify all of those killed…’

And, yes, we also need to recover the names of those killed by other actors too.  None of  them are ‘just “collateral damage” or abstractions’.

The principle is developed more generally by the Every Casualty project of the Oxford Research Group.

The purpose of the Every Casualty (EC) programme is to enhance the technical, legal and institutional capacity, as well as the political will, to record details of every single casualty of armed conflict throughout the world, civilian as well as combatant. Civilian deaths are particularly poorly documented, and often not recorded at all. Where death tolls are limited to purely numerical assessments, exaggerated, politicised claims and counter-claims frequently abound. By contrast, where Western nations are engaged in conflicts, they meticulously record their military dead not as numbers but by name.

Such detailed, verifiable and comprehensive recording when extended to all victims provides both a memorial for posterity and public recognition of our common humanity. Careful and respectful records ensure that the human cost of conflict is better understood and can become an immediately applicable resource for conflict prevention and post-conflict recovery and reconciliation.

But I think it’s probably a mistake to privilege names over numbers: numbers matter too, and  – whatever the legal-humanitarian reasons for recovering the names – they also help us to imagine what the raw numbers mean.  There are other ways of achieving the same end, and they don’t necessarily involve abandoning anonymity.  I’ve never forgotten the final scene in Richard Attenborough‘s film of “Oh, what a lovely war!”; the shot begins with a single white cross and then pans back and back and back, seemingly without end, until the screen is filled with a sea of 100, 000 crosses [start at 2:21].