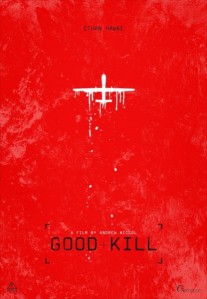 Now Niccol is back with Good Kill (2014), which was previewed at the Toronto International Film Festival earlier this month:

In an air-conditioned shipping container somewhere in the Nevada desert, a war is being waged. Behind a door that reads “YOU ARE NOW LEAVING THE USA,” five flight-suited US Air Force officers operate drones that hover above “zones of interest” in the Middle East. At the press of a button, tiny targets viewed on computer screens vanish in plumes of smoke, as in a videogame. “I blew up six Taliban in Pakistan today,” Major Thomas Egan (Ethan Hawke) tells a convenience store clerk. “Now I’m going home to barbecue.”

So far, so familiar; there is no shortage of similar presentations of drone warfare in pop culture more generally (I’m thinking in particular of Omar Fast‘s video 5,000 feet is Best and George Brant‘s play Grounded).

There’s a thoughtful review of Good Kill from the Guardian‘s Henry Barnes here:

Cinematographer Amir Mokri (director of photography on Lord of War, Niccol’s satire on the international arms trade) shoots the Vegas desert in a harsh, sterile light. The Las Vegas suburbs, shot from the sky, look as dusty and alien as the places Egan sees on his monitor. It plays into Egan’s isolation. He is distant from his wife (Mad Men’s January Jones) and drinks too much since he lost his flying privileges. He’s got the creeping feeling that drone warfare is cowardly and misses the fear of being in danger. “We’ve got no skin in the game,” he says. His wife says she’s glad to have him home with the kids. Egan zones out and stares at the sky.

Niccol creates an atmosphere that is airless and dull, an unusual tone for a modern war film, but one that fits the subject matter perfectly. That would have been enough, but the director feels the need to make his polemic on drone warfare plain. He sets up the team as an ethics debate meet. On one side is Egan and Suarez (Zoë Kravitz), a young female recruit with a conscience. On the other are two knuckleheads with kill boners. They ridicule the idea that they’re doing anything but protecting their country from terrorist threat. Niccol’s script goes too far in singling them out as the idiots. Kravitz’s character, more left-wing and articulate on post-9/11 military mandate, also comes across as one-dimensional. 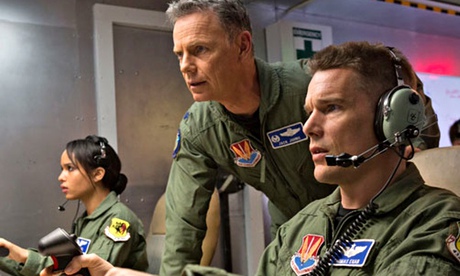 The Telegraph‘s Robbie Colin caught an earlier screening at Venice, and was more impressed:

Niccol’s film … is a searching, timely drama about the dehumanising effects of waging war at a distance – the way that guilt can still stain at 11,000 miles, far outside the blast zone of blood and rubble. It looks again at one of the central themes of his script for The Truman Show: the intoxicating, corruptive power of the God’s-eye view.

As Egan’s eyes scan the monitors, he sees with astonishing clarity the faces of the men – and sometimes, unavoidably, the women and children – he is about to execute. Over time, he gets to understand their daily routines, watching them eat, stroll and sweep. The difference is this story isn’t science-fiction, but you’re left with the sickening sense that it should be.

You can also find an interesting roundtable interview with Niccol and Hawke recorded at TIFF here: thanks to Robert Bridi for the tip.

One last thing: I haven’t seen the film yet, but from the reviews and trailers I have seen it seems that, as in so many other registers, popular culture continues to be preoccupied with what happens in Nevada – and what happens on the ground is left shrouded in so many shades of grey.