Melanie Richter-Montpetit has an essay at The disorder of things, ‘Why Torture When Torture Does Not Work? Orientalism, Anti-Blackness and the Persistence of White Terror‘, which repays careful reading.

[L]ocating the findings of the Senate Torture Report within the racial-sexual grammars of chattel slavery and its afterlife opens up our analyses beyond explanatory and moral frameworks such as failed intelligence-gathering, “state of exception” or “human rights abuses” towards a more comprehensive understanding of seemingly illiberal security practices in the War on Terror. This genealogy indicates the fundamental role and value of force for the consolidation of the sovereign authority of the U.S. settler imperial formation ‘at home’ and abroad, and suggests the stubborn persistence of certain racial-sexual grammars of legitimate violence and suffering in this age of “post-racial triumph.” For “[w]ithout the capacity to inspire terror, whiteness no longer signifies the right to dominate.”

The immediate provocation for her essay, which is rooted in her recent York PhD thesis Beyond the Erotics of Orientalism: Homeland Security, Liberal War and the Pacification of the Global Frontier, was the Senate Torture Report (see my earlier post on ‘Tortured geographies’ here). 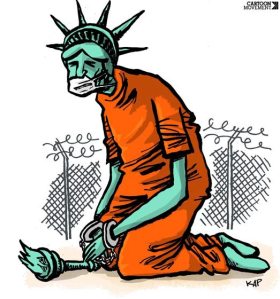 At Just Security Jameel Jaffer has a brief, important post about the release of these documents – and, crucially, the Obama administration’s attempt to prevent the publication of photographs documenting the abuse of detainees at US military facilities – that loops back to the debate over the Charlie Hebdo cartoons.  He argues that it is at the very least ironic that some of the same voices calling for the freedom to publish cartoons whatever their consequences are now demanding the suppression of other images ‘because of the possibility that their release will provoke violence’…

And speaking of violence and torture in the global war prison, Mohamedou Ould Slahi‘s Guantanamo Diary, which is being serialised in the Guardian and was published in book form earlier this week, provides more evidence of its routinised, banalised practice.

Slahi is still incarcerated at Guantanamo even though he was approved for release in 2010.  Spencer Ackerman reports:

Slahi’s manuscript was subjected to more than 2,500 redactions before declassification, ostensibly to protect classified information, but with the effect of preventing readers from learning the full story of his ordeal. The book is being published with all the censor’s marks in place, and the publishers – Canongate in the UK and Little, Brown in the US – hope they will be able to publish an uncensored edition when Slahi is eventually released.

The full manuscript is available here.  You can find Tim Stanley‘s review at the Telegraph here (‘a necessary book’ that ‘reminds us that the evil we’re fighting can be found in ourselves as well as in our enemies’), Mark Danner‘s extended review at the New York Times here (‘Slahi’s memoirs are filled with numbingly absurd exchanges that could have been lifted whole cloth from “The Trial”’), and Deborah Perlstein‘s review at the Washington Post here (‘Slahi’s descriptions of … torture are the book’s most compelling, and difficult, passages [and] … are closely consistent with descriptions in official investigations of the treatment of other U.S.-held detainees’.)

In the face of these horrors, it’s necessary to consider this blunt reminder from Peter Beinart:

Torture, declared President Obama … in response to the newly released Senate report on CIA interrogation, is “contrary to who we are.” Maine Senator Angus King added that, “This is not America. This is not who we are.” According to Kentucky Congressman John Yarmuth, “We are better than this.”

No, actually, we’re not. There’s something bizarre about responding to a 600-page document detailing systematic U.S. government torture by declaring that the real America—the one with good values—does not torture. It’s exoneration masquerading as outrage. Imagine someone beating you up and then, when confronted with the evidence, declaring that “I’m not really like that” or “that wasn’t the real me.” Your response is likely to be some variant of: “It sure as hell seemed like you when your fist was slamming into my nose.” A country, like a person, is what it does.

And in the face of evasion and denial – and redaction and suppression – here is Chase Madar from February’s Bookforum:

Though the [Senate] report has blacked out the names of the torturers, refusing even to use pseudonyms, torture watchers have been able to identify one of the agents, a model for Maya in Zero Dark Thirty. Her record of malfeasance, misrepresentation, incompetence, and gratuitous participation in waterboarding was blisteringly detailed by NBC News and [Jane Mayer at] the New Yorker, though neither outlet would name her. But far from being sanctioned or even demoted, she has risen to the civilian-rank equivalent of general inside the CIA. She has, unbelievably, served as the recent head of the agency’s “global jihad unit.”

It’s tempting to compare this to Latin American–style police impunity, but that would be unfair to the societies that have punished at least some of the abuses of their past dictatorships. In the same week that the SSCI released its report, Brazil published its own investigation into state torture of political dissidents under its long dictatorship. Indeed, one of that torture regime’s victims, Dilma Rousseff, is now the head of state. Latin American nations have been chipping away at, or simply ignoring, the amnesty deals made with the authoritarian rulers of the ’70s and ’80s and have brought many of their torturers to justice.

The United States would face a very different reckoning with its record of torture, should it elect to take a genuine, closer look at it. In our case, the impact of torture has largely been muffled by the military adventurism that has underwritten it…

1 thought on “Torture and raison d’état”