To more than supplement my notes on the US air attack on the MSF hospital in Kunduz last October, two first-hand accounts have just been published.  The first is by Dr Evangeline Cua, a Philippina surgeon who was on duty in the Trauma Centre when the attack started.  She describes, in extraordinary detail, her work before the attack and then the nightmare (that keeps returning to haunt her, long after she has left Afghanistan): 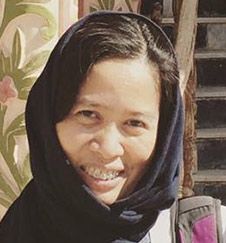 We were like two headless chickens running in total darkness — me and the surgeon who assisted me in an operation. The nurses who were with us a moment ago had run outside the building, braving the volley of gunshots coming from above. I was coughing, half-choked by dust swirling around the area. Behind my surgical mask, my mouth was gritty, as if somebody forced me to eat sand. I could hear my breath rasping in and out. Layers of smoke coming from a nearby room made it hard to see where we were. Blinking around, I caught sight of a glow, from a man’s hand holding a phone. He seemed mortally wounded but was still trying to send a message…perhaps to a loved one?

I stood transfixed, not knowing where to turn or what to do. All around us, bombing continued in regular intervals, shaking the ground, sending debris sweeping and flying. One. Two. Three. I tried to count but there seems to be no abatement to the explosions. I stopped counting at eight and silently prayed that we could get out of there alive.
Fire licked at the roof at one end of the building, dancing and sparkling in the dark, reaching towards the branches of the trees nearby. The ICU was burning.

The second is by Dr Kathleen Thomas, an Australian doctor who was in charge of both the ICU and the ER (more from her here):

Dr Osmani [below] was the senior doctor in the unit the night the fighting started and decided to stay with us, camping out in the hospital throughout the week. He had nothing with him except the clothes on his back, not even a toothbrush. His family were extremely worried for his welfare. He had a constant flow of phone calls checking on him, probably asking him to leave. We all knew that at times, our hospital was in the middle of the rapidly changing front line – we could feel it. When the fighting was close – the shooting and explosions vibrated the walls. I was scared – we were all scared. When a loud “BOOM” would sound a bit closer to the hospital, we would all drop to the floor away from the large windows that lined the ICU walls. We also tried to move the patients and large (flammable) oxygen bottles away all from the windows, but the layout of the ICU prohibited doing this effectively. I worried constantly about the exposure from those windows – yet never thought to worry about the exposure from the roof.

By the end of the week we were physically, mentally and emotionally exhausted. There were moments when a sense of hopelessness overwhelmed us. Dr Osmani expressed these sentiments on the final day, following a tragic incident where a family trying to escape Kunduz was caught in crossfire, killing several children at the scene, then two more dying in our ER and OT. The remaining children were being treated with severe injuries, he stated: “the people are being reduced to blood and dust. They are in pieces.”

When the US military’s aircraft attacked our hospital, its first strike was on the ICU. With the exception of one three-year-old, all the patients in the unit died. The caretakers with the patients died. Dr Osmani died. The ICU nurses Zia and Strongman Naseer died. The ICU cleaner Nasir died. I hope with all my heart that the three sedated patients in ICU, including our ER nurse Lal Mohammad, were deep enough to be unaware of their deaths – but this is unlikely. They were trapped in their beds, engulfed in flames.

The plane hit with alarming precision. Our ER nurse Mohibulla died. Our ER cleaner Najibulla died. Dr Amin suffered major injuries but managed to escape the main building, only to then die an hour later in the arms of his colleaguesas we desperately tried to save his life in the makeshift operating theatre set up in the kitchen. The OT nurse Abdul Salam [below] died. The strikes tore through the outpatients department, which had become a sleeping area for staff. Dr Satar died. The medical records officer Abdul Maqsood died. Our pharmacist Tahseel was lethally injured. He also made it to safety in the morning meeting room, only to die soon after. He bled to death. Two of the watchmen, Zabib and Shafiq, also died.

Our colleagues didn’t die peacefully like in the movies. They died painfully, slowly, some of them screaming out for help that never came, alone and terrified, knowing the extent of their own injuries and aware of their impending death. Countless other staff and patients were injured; limbs blown off, shrapnel rocketed through them, burns, pressure-wave injuries of the lungs, eyes and ears. Many of these injures have left permanent disability. It was a scene of nightmarish horror that will be forever etched in my mind.

More details on the MSF employees killed in the strike can be found here.  There is still no sign of the US’s internal investigation into the attack being released.

Earlier this month, six months after the attack, MSF confirmed that it had still not decided whether to reopen the Trauma Centre:

We first need to obtain clear reassurances from all parties to the conflict that our staff, patients and medical facilities will be safe from attack. We need to know that the work of our doctors, nurses and other staff will be fully respected in Kunduz and in all places where we work in Afghanistan. We require assurances that we can work according to our core principles and to international humanitarian law: namely, that we can safely treat all people in need, no matter who they are, or for which side they may fight. Our ability to operate hospitals on the frontline in Afghanistan and in conflict zones everywhere depends on the reaffirmation of these fundamental principles.