A quick heads-up: the latest issue of Millennium [44 (3) (2016) 305-20] includes Bruno Latour‘s, ‘Onus Orbis Terrarum: About a Possible Shift in the Definition of Sovereignty’, a keynote address that – amongst many other targets – goes after the globe and geopolitics….  To give you a taste:

To put it more dramatically, the concept of the Globe allows geopolitics to unfold in just the same absolute space that was used by physicists before Einstein. Geopolitics remains stubbornly Newtonian. All loci might be different, but they are all visualised and pointed to on the same grid. They all differ from one another, but in the same predictable way: by their longitude and latitude.

What is amazing if you look at geopolitical textbooks, is that, apparently, the Globe remains a universal, unproblematic, and uncoded category that is supposed to mean the same thing for everybody. But for me, this is just the position that marks, without any doubt, the imperial dominion of the European tradition that is now shared, or so it seems, by everyone else.

I want to argue that the problem raised by the link between Europe and the Globe is that of understanding, as Peter Sloterdijk suggests, why it is that the onus orbis terrarum has been spread so efficiently that it has become the only space for geopolitics to unfold. Why is it that the res extensa, to use a Latin term that pertains to the history of art as well as of science and of philosophy, has been extended so much?

Instead of asking what vision of the Globe Europe should develop, it seems to me that the question should be: is Europe allowed to think grandly and radically enough to get rid of ‘the Globe’ as the unquestioned space for geopolitics? If it is the result of European invention and European dominion, this does not mean that it should remain undisputed. If there is one thing to provincialise, in addition to Europe, it is the idea of a natural Globe itself. We should find a way to provincialise the Globe, that is, to localise the localising system of coordinates that is used to pinpoint and situate, relative to one another, all the entities allowed to partake in geopolitical power grabs. This is the only way, it seems to me, to detach the figure of the emerging Earth from that of the Globe.

Geopolitics limited to absolute space?  The Globe as the ‘unquestioned space’ for geopolitics (and a geopolitics that is indifferent to, even silent about ‘the Earth’)?  Really? 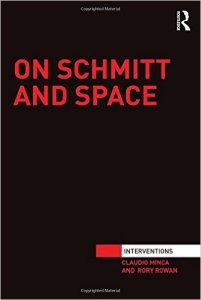 In an interview with Mark Salter and William Walters, which appears as a coda to the issue, there is also a lot about Carl Schmitt and the Nomos of the Earth (and a pointed rejection of the interpretation offered by Claudio Minca and Rory Rowan), and this passage on drones that loops back to the discussion of sovereignty:

The point, I think, is that ‘sovereign’ has one very precise meaning, which is: a referee. So, is there a referee or not? In my understanding of Schmitt, in the two great ideas of his – the ones on politics and the ones in Nomos – there is no referee, precisely. And so, you have to do politics, which means you have to have enemies and friends. Not because of any sort of war-like attitude (even though there is some talk of that in Schmitt as well). But because, precisely, if you have no referee, then you have to doubt; you have to risk that the others might be right, and that you might be wrong. You don’t know your value; you are not in a police operation. OK, so that defines the state now, because the state goes, all the way down, to a police operation. If there is a police operation and not war, then there is a State, in some ordinary sense. That is how we can understand the first hegemon of the United States, entering the First World War as a police operation, no question. The drone, now, flowing over [and] … moving on top of the space of the land, is a police operation because the one who sent it has no doubt that he or she acts as referee. So, the first thing is to draw the extent of that hegemon. How we would do that, I don’t know. Certainly, there would have been a book by Schmitt a few days after the first drone, about this new definition of the State, extending above air its police operation everywhere.

Good knock-about stuff, but I’m not convinced about any of this either (and exasperated by the current preoccupation with the hypostatisation of ‘policing’)…

2 thoughts on “‘Empire of the Globe’”