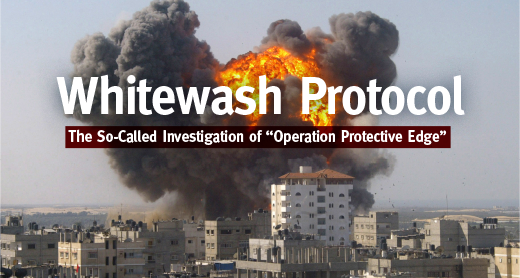 Regular readers will remember my series of commentaries on Israel’s punitive and reckless assault on Gaza during the summer of 2014 (see, for example, here, here and here).

In the debates over what Israel called ‘Operation Protective Edge’ – and over later modern military violence more generally – questions of law have come to the fore: partly because law is now closely implicated in the conduct of military operations (‘operational law’), as Craig Jones‘s wonderful work has demonstrated, and partly because its legitimating narrative requires (and indeed rests on) militaries investigating their own alleged breaches of international law and their rules of engagement.

B’Tselem: The Israeli Information Center for Human Rights in the Occupied Territories has now published Whitewash Protocol: the so-called investigation into Operation Protective Edge.  It’s a complex, forensic investigation, but here is one of the key findings about the Israeli military investigation of its own actions:

The MAG [Military Advocate General’s Corps] examined only several of dozens of almost identical attacks that took place over the fifty days of hostilities, time after time ending with terrible human tall. Given these recurring results, one cannot accept the MAG’s position, that those responsible for these attacks could reasonably base their assessments of the anticipated harm to civilians on assumptions that were repeatedly proven unfounded, and debunked by their own actions or the actions of their colleagues – at a heavy death toll.

The interpretation adopted by the MAG has a far reaching implication that applies to all strikes carried out during the operation: It absolves every level of officials involved in the attacks – from the prime minister, through the MAG himself through to the persons who ultimately fired – of the duty to do everything in their power to minimize harm to civilians. In fact, the MAG sets the bar very low in terms of what is required of those responsible for the attacks – including senior military officers and the MAG (who are not under investigation in any case) – by doing no more than examining what they claimed to know prior to the attacks, while entirely disregarding the question of whether their assessment was reasonable. In doing so, the MAG utterly overlooks the issue of what those responsible for the attacks should have known, including the obligation to learn from their own experience.

And the reason this matters is made plain in the summary:

The fighting during Operation Protective Edge was brutal and violent. Israel implemented a policy of air strikes against homes, which killed hundreds of people, including entire families. Tens of thousands of people were left homeless, losing all they held dear. Genuine, effective investigations are needed not just for the sake of achieving justice for the victims and their loved ones. They are needed as a deterrent to forestall future actions of this sort and to avert further losses. When nothing is investigated, when the consensus is that everything done during the fighting was moral and legal – the stage is set for actions such as these, or even worse, to recur. There was no accountability after Operation Cast Lead, only whitewashing. Now, after Operation Protective Edge, there is no accountability either, only whitewashing. This is not a theoretical legal issue: we are talking about human lives.

The full report can be downloaded as a pdf here.  It needs to be read in conjunction with B’Tselem’s report from May 2016, The Occupation’s Fig Leaf: Israel’s Military Law Enforcement System as a Whitewash Mechanism available here.

In his response to the report, the [Israeli military] spokesperson said that B’Tselem is waging a “delegitimization campaign” against the military law enforcement system. Yet this system cannot be considered legitimate until it ensures justice for victims and unless its investigations seek to uncover the truth and hold those responsible accountable…. What may appear at times to be an independent, efficient law enforcement system is in fact a mechanism for covering up suspected offenses and protecting the real culprits.

To be sure, the IDF shoots more than the messenger…