Just caught up with Ecologies of Power by Pierre Bélanger and Alexander Arroyo (MIT Press), which – as the subtitle reveals – is a fascinating countermapping of the Pentagon’s logistical landscapes and military geographies:

This book is not about war, nor is it a history of war. Avoiding the shock and awe of wartime images, it explores the contemporary spatial configurations of power camouflaged in the infrastructures, environments, and scales of military operations. Instead of wartime highs, this book starts with drawdown lows, when demobilization and decommissioning morph into realignment and prepositioning. It is in this transitional milieu that the full material magnitudes and geographic entanglements of contemporary militarism are laid bare. Through this perpetual cycle of build up and breakdown, the U.S. Department of Defense –the single largest developer, landowner, equipment contractor, and energy consumer in the world – has engineered a planetary assemblage of “operational environments” in which militarized, demilitarized, and non-militarized landscapes are increasingly inextricable.

In a series of critical cartographic essays, Pierre Bélanger and Alexander Arroyo trace this footprint far beyond the battlefield, countermapping the geographies of U.S. militarism across five of the most important and embattled operational environments: the ocean, the atmosphere, the highway, the city, and the desert. From the Indian Ocean atoll of Diego Garcia to the defense-contractor archipelago around Washington, D.C.; from the A01 Highway circling Afghanistan’s high-altitude steppe to surveillance satellites pinging the planet from low-earth orbit; and from the vast cold chain conveying military perishables worldwide to the global constellation of military dumps, sinks, and scrapyards, the book unearths the logistical infrastructures and residual landscapes that render strategy spatial, militarism material, and power operational. In so doing, Bélanger and Arroyo reveal unseen ecologies of power at work in the making and unmaking of environments—operational, built, and otherwise—to come.

Here is the legendary Claude Raffestin on the project:

Among its remarkable achievements, Ecologies of Power offers a new way of analyzing and representing the complex apparatus commonly called ‘war’ through its military infrastructures, logistical territories, and the material, energetic, informational, and financial flows that make and move through them. Deftly traversing a multitude of scales and landscapes, the book mobilizes a vast body of transdisciplinary work on the complex subject of power and its modes of spatial and semiotic representation. This ambitious and long-awaited volume is an essential reference for all scholars across the arts and sciences whose work aims to rethink how we engage—and disengage from—contemporary forms of conflict.

You can get an illustrated preview from Regine at We make money not war here.  She lists the book’s five core case studies: 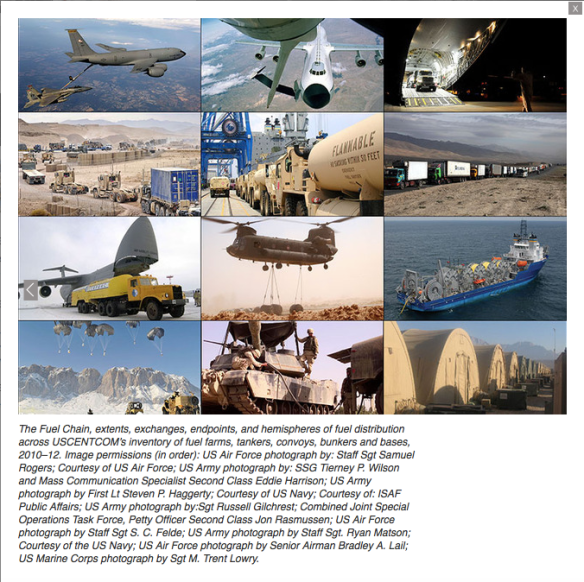 The images I’ve used here are from the Graham Foundation‘s webpage on the project.

3 thoughts on “Counter-mapping and ecologies of military power”