Earlier this month I commented on the theatre of secrecy within which US drone strikes in the Federally Administered Tribal Areas of Pakistan is staged: a discreditable rhetorical device that works to divert the public gaze from Waziristan to Washington.  I drew on a brilliant essay by Madiha Tahir, in which she objects to the way the Obama administration’s ‘theatrical performance of faux secrecy’ over its drone war in the FATA (and elsewhere) – a repugnantly teasing dance in which the veil of secrecy is let slip once, twice, three times – functions to draw its audience’s entranced eye towards the American body politic and away from the Pakistani bodies on the ground.

Tonight our eyes are drawn back to Pakistan with the publication of a field report called Living Under Drones from the International Human Rights and Conflict Resolution Clinic of Stanford Law School and the Global Justice Clinic at NYU.  At the time of writing the report has not been released for public distribution, but early versions were made available to media outlets under embargo. The most detailed coverage that I have found so far is from firedoglake (a three part report) but there are also good reports from the Los Angeles Times and in the UK the Guardian and the Independent – with, I hope, more to follow.  There is also a YouTube video summarising the report:

Robert Greenwald and Brave New Foundation prepared the video to accompany the report. Sarah Knuckey of New York University and James Cavallero of Stanford University describe how they compiled the report and explain they were able to gain access to people in an “area cordoned off and into which virtually no one can enter.”

From the media summaries and the video it’s clear that Living under drones directly challenges the dominant narrative of ‘precision strikes’ with few civilian casualties.  Its most original contribution derives from personal testimony by those directly affected.  Working in concert with both Reprieve , a London-based law and human rights organisation, and the Foundation for Fundamental Rights, a human rights organisation in Pakistan, the American researchers interviewed 139 people over a nine-month period, including 69 survivors or relatives of victims. The report provides first-hand accounts of three specific drone strikes and details the ‘considerable and under-accounted for harm to the daily lives of ordinary civilians, beyond death and physical injury.’ It also documents the hideous practice of ‘double tap‘ – follow-up strikers on rescuers – that, in a radically different context, was vigorously condemned by the United States just days ago when the attack on its diplomatic mission in Benghazi was followed by an attack on the survivors and rescuers.

Hayatullah stopped, got out of his own car, and slowly approached the wreckage, debating whether he should help the injured and risk being the victim of a follow-up strike. He stated that when he got close enough to see an arm moving inside the wrecked vehicle, someone inside yelled that he should leave immediately because another missile would likely strike. He started to return to his car and a second missile hit the damaged car and killed whomever was still left inside. He told us that nearby villagers waited another twenty minutes before removing the bodies, which he said included the body of a teacher from Hayatullah’s village.

Not surprisingly, this fear has a catastrophic effect on daily life in the region: on everything from going to school to mourning at a funeral.  Sarah Knuckey, one of the lead authors of the report, explained that people “have a constant fear that they’ll be hit, even though they know they’re civilians.”

When I’ve lectured about the supposedly covert campaign, there’s almost always been someone in the audience to tell me that there is a vast difference between targeting individuals in Pakistan and levelling whole areas of a city like Cologne.  So there is.  But there are also significant differences.

First, the combined bomber offensive against Germany – whatever one thinks about it, and I’ve made my own criticisms of it clear in “Doors into nowhere” (see DOWNLOADS tab) – was carried out during a declared state of war: the United States is not at war with Pakistan (even though one of the preoccupations of the previous US administration, and presumably the present one, was, precisely, how to conduct ‘war in countries we’re not at war with‘).

Second, when most people imagine (or remember) air raids in the Second World War I suspect most of them conjure up the sound of air raid sirens, the crump-crump of the anti-aircraft batteries, and the clatter down to the air-raid shelter.  In the FATA there are no sirens, no air defences and no shelters. 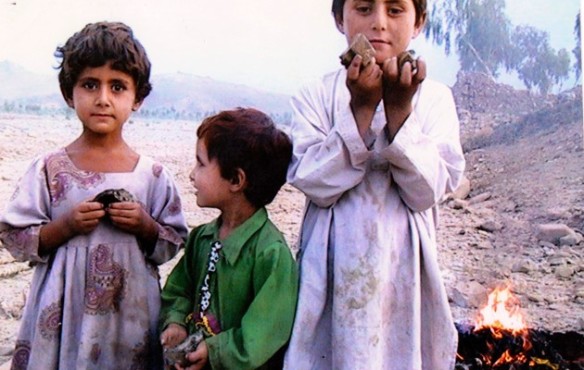 Living under drones is particularly important because there are serious state restrictions on reporting from (or even in) the region; foreign journalists require military permission to enter, and all journalists operate under constant threat: see, for example, here and here.  The last detailed field survey in the region was carried out by the Campaign for Innocent Victims in Conflict (CIVIC) – now the Center for Civilians in Conflict– which interviewed over 160 civilians in 2009-2010 who had experienced direct losses in either FATA or the Khyber Pakhtunkhwa (KPK, formerly Northwest Frontier Province).  The results were published as Civilian Harm and Conflict in North West Pakistan (2010) though it should be emphasized that the report makes it clear that the CIA is not the only perpetrator, and that the researchers also detailed losses from both Taliban violence and counterinsurgency operations by the Pakistani military, including strikes by the Pakistan Air Force).  Since then, the Obama administration has stepped up its campaign to minimise or even deny civilian casualties from its covert war, and in stark counterpoint Appendix B of Living under drones provides a weekly accounting of strikes and casualties since 2010.  The Bureau of Investigative Journalism has also done vital, brilliant work in documenting the casualties, amplifying the voices of the survivors, and exposing the horrors that would otherwise pass unnoticed by those who have had their eyes fixed on Washington rather than Waziristan (see, for example, here).

Today the findings of these individuals and organisations have been confirmed by another courageous group of researchers.  And the answer, as Madiha Tahir made perfectly clear, is not to be found in ‘transparency’.  That may be a start – but it must not be the end.

Note:  You should be able to download the report Living under Drones: Death, injury and trauma to civilians from US drone practices in Pakistan here but if not then try here (and many thanks to Nicholas Dahmann for the mirror).  More when I’ve worked through the report, but in the meantime here is the incomparable Glen Greenwald.

8 thoughts on “Living (and dying) under drones”