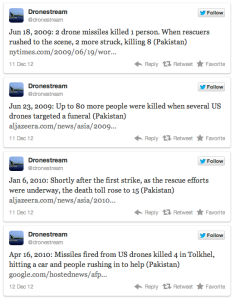 Michael Kelley notes that Josh Begley‘s tweeted enumeration of US drone strikes in Pakistan, Yemen and Somalia at Dronestream confirms the vile ‘double-tap‘ strategy in which a first strike is rapidly followed by a second targeting rescuers.  As Kelley notes, ‘A 2007 report by the Homeland Security Institute called double taps a “favorite tactic of Hamas” and the FBI considers it a tactic employed by terrorists.’

The militarised practice has been widely reported – not least in Staford/NYU’s Living under Drones – but Begley’s cascade of tweets provides a powerful statement of its relentless rhythm.  In September Mirza Shahzad Akbar, a Pakistani lawyer who represents victims of the attacks, told Britain’s Independent newspaper:

“These strikes are becoming much more common…  In the past it used to be a one-off, every now and then. Now almost every other attack is a double tap. There is no justification for it.”

Far from any justification, the UN Special Rapporteur on Extrajudicial Killings argues that such attacks constitute war crimes.  In fact, as Gwynne Dyer points out,

“DOUBLE TAP” IS what mobsters do when they put somebody down. One bullet in the heart, one in the head. That way they stay down. It’s practically standard operating procedure among hitmen. 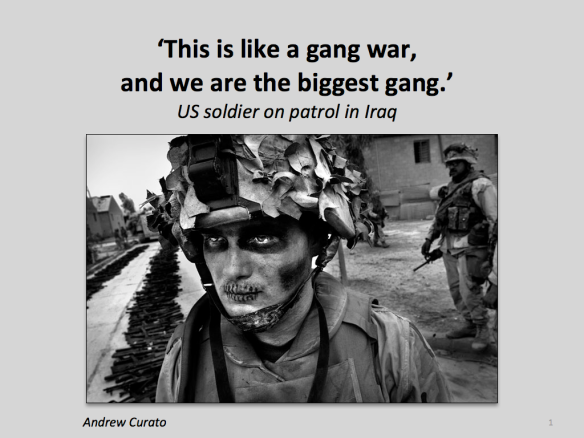 It’s not so long ago that the Pentagon was alarmed at the presence of members of US street gangs among its soldiers patrolling the streets of Baghdad (see Frank Main, ‘Gangs claim their turf in Iraq’, Chicago Sun-Times 1 May 2006).  It’s high time the US took a look at mobsters patrolling the skies too.

Thanks to my good friend Oliver Belcher for the original link.