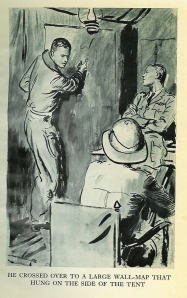 There is growing interest in thinking through the contemporary blurring of policing and military violence.  When, I wonder, did we start referring to “security forces“?  The earliest entry in the OED is from 1973 and refers to Britain’s military/police operations in Northern Ireland, but the practice is evidently much older than that. Those who grew up in Britain with Biggles (or perhaps in spite of Biggles) will surely remember Captain W.E. Johns‘s creation of the Special Air Police after the Second World War – and, as my illustration (left) from Biggles Flies East implies, these operations were about the violent production of particular spatialities –  but ‘air control’ was developed as an important police/military modality of British colonial power immediately after the First World War, when its prized sphere of operations was the Middle East and India’s North West Frontier (notably Waziristan). 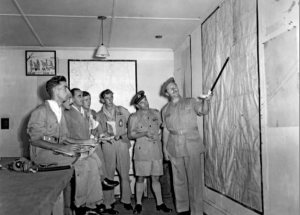 In the 1950s Britain applied similar (il)logics to the the Mau Mau insurgency in Kenya, as Clive Barnett notes here (with another, rather more serious nod to Biggles), and to the Malayan Emergency.  Bombing was a routine tactic in all these pre- and post-war campaigns – the image on the right is of an RAF briefing in Kenya in 1954 – and Britain’s ‘aerial supremacy’ was, of course, uncontested in these colonial theatres of war.  Other colonial powers used it too.  No doubt the interest shown by the US Border Patrol and US police forces in (at present, unarmed) drones can be situated within this techno-political history of air policing, though I’m aware that the lines of descent are more complicated than my cartoons can suggest.

Mark Neocleous has outlined a careful (and still longer) genealogy of the very idea of ‘policing’ that speaks directly to these issues in ‘The Police of Civilization: The War on Terror as Civilizing Offensive’, International Political Sociology 5 (2011) 144-159:

The monopoly over the means of violence that is fundamental to the fabrication of social order is the core of the police power. Although such a formal monopoly over the means of violence does not exist in the international realm—which is the very reason why so many people have found it difficult to develop the concept of ‘‘international police’’—the violence through which this realm has been structured is obvious. It has traditionally been cast under the label ‘‘war.’’…

To say that police and war conjointly form the key activity of the project of civilization is to say nothing other than violence has remained intrinsic to the process in question. Thus, central to the idea of civilization is military-police terror (albeit, as ‘‘civilization,’’ a terror draped in law and delivered with good manners)…

The attempt to hold on to categorical distinctions between ‘‘police’’ or ‘‘military’’ for analytical, legal, and operational reasons runs the risk of losing what is at stake in the fabrication of international order: the way war imbricates itself into the fabric of social relations as a form of ordering the world, diffracting into a series of micro-operations and regulatory practices to ensure that nebulous target ‘‘security,’’ in such a way that makes war and police resemble one another.

If, as I’ve suggested, these formulations have a direct bearing on counterinsurgency – and not only British practices: see Neocleous on Vietnam here – and on the modalities of modern colonial power more generally, they are also revealed with remarkable clarity in the contemporary city: what Steve Graham calls ‘Foucault’s boomerang’, as colonial tactics are repatriated to the metropolis. 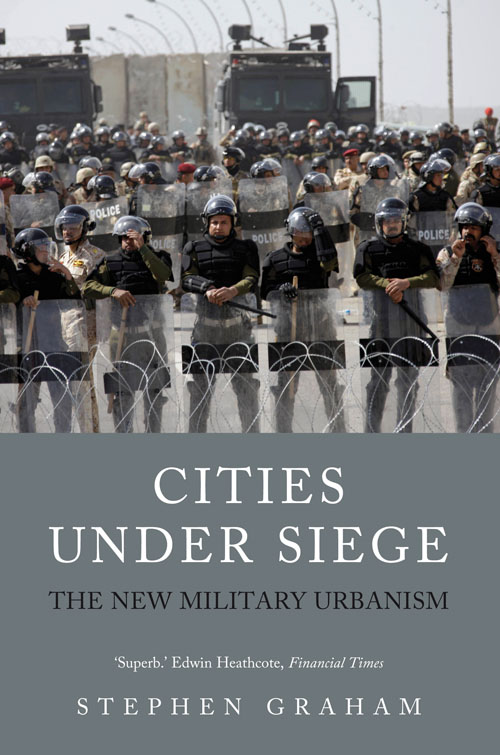 As Steve shows in exemplary detail in Cities under siege: the new military urbanism (Verso, 2010; paperback out now), a vital zone of convergence between police and military violence – what Neocleous calls their ‘violent fabrication of the world’, their ordering of it in every sense of the verb – is the city:

‘As security politics centre on anticipation and profiling as means of separating risky from risk-free people and circulations inside and outside the territorial limits of nations, a complementary process is underway.  Policing, civil law enforcement and security services are melding into a loosely, and internationally, organized set of (para)militarized security forces.  A “policization of the military” proceeds in parallel with the “militarization of the police”.’

So here is welcome news of a Live Web Seminar from Harvard’s Program on Humanitarian Policy and Conflict Research, Dangerous Cities: Urban violence and the militarization of law enforcement, 2 October 2012 0930-1100 (Eastern).

More than half of the world’s population is concentrated in urban areas. According to UNFPA, this number is expected to rise to 5 billions by 2030, reaching 2/3 of the world population, with the largest cities emerging in Africa and Asia. Regrettably, along with this mass urbanization has come an unprecedented level of violence and crime in densely populated slums and shantytowns. Cities like Baghdad, Kingston, Rio de Janeiro, Guatemala, Ciudad Juarez and Mogadishu have become the battlegrounds of contemporary conflicts.

In many countries, particularly in Latin America, this emerging form of violence is considered one of the greatest threats to national security. Indeed, urban violence can be as deadly and costly as traditional armed conflicts. In a 2007 report, the UNODC pointed out that the levels of violence in El Salvador in 1995 were higher than during the civil war of the 1980s.

To curb the violence, states have responded by deploying specially trained military units when traditional law enforcement has failed to restore security. These instances of ongoing urban violence engaging organized criminal networks, coupled with the use of military force, increasingly resemble to situations of armed conflicts.
While the militarization of law enforcement may be unavoidable when traditional law enforcement institutions lack the resources and expertise to contain urban violence, the legal and policy framework for the conduct of such operations needs yet to be developed. The regulation of the use of military force represents a major challenge in urban environments, even more so when humanitarian law is formally inapplicable and the enforcement of international human rights is weak. Such environment may require adaptation of military doctrine, training, and equipment in order to minimize abuses against civilians, detainees and those no longer engaged in violent acts.

In light of these considerations, this Live Web Seminar will shed light on the tensions and challenges arising out of the application of humanitarian principles in urban violence. Expert panelists and participants will explore the following questions:

–       Whether instances of urban violence can be characterized as armed conflicts? If so, what are the advantages and disadvantages of applying International Humanitarian Law (IHL) to these situations?
–       To what extent is it necessary to develop a legal framework that incorporates both humanitarian and human rights considerations tailored to situations of urban violence?
–       What strategies and policy tools can be put in place in order to minimize human suffering and, at the same time, address the security concern of states in urban conflicts?
What is the proper role of humanitarian actors in urban conflicts?

As should be obvious from the pre-seminar summary, this isn’t quite the agenda that Neocleous has in mind – but it’s also clear that his suggestions should also animate continuing discussions of our so-called ‘humanitarian present‘…