The latest issue of Radical Philosophy (192, July/August 2015) is out now, and it includes a short essay by Martina Tazzioli, ‘The politics of counting and the scene of rescue: Border deaths in the Mediterranean’ (see also my post about The Left to Die Boat).  Her commentary adds new dimensions to discussions of the humanitarian present:

The exclusive focus on the modalities of rescue has overshadowed the peculiar politics of life that underpins military-humanitarian operations: migrants seeking asylum become lives to rescue and their freedom – of movement and of choosing a safe place to stay – is dislodged from the outset. The mechanisms of capture and containment of unauthorized movements act simultaneously through border restrictions that cause border deaths and through the humanitarian channelling system. The risks to life that people who seek asylum in Europe take, being forced to cross the Mediterranean ‘illegally’, and rescue politics are not opposite mechanisms of migration government. This means that humanitarian measures hold a specific political technology over migrant lives by rescuing, sorting and channelling migrants, one in which people escaping wars can seek asylum only by first becoming shipwrecked persons to rescue. Humanitarian and security measures are thus two intertwined political technologies of migration governmentality.

The map above is drawn from the Migrants Files, a database recording the deaths of more than 29,000 migrants who have tried to seek refuge in Europe since 200.  But Martina’s commentary details what she calls the ‘politics of counting’ and in doing so she enlarges the scope of those (other) projects that seek to move behind the statistical toll of wars and other forms of military and paramilitary violence to identify and name their otherwise nameless casualties:

If border deaths are accounted for through a logic of counting, something remains undetectable from the political perspective of the northern shore of the Mediterranean. Moving beyond the logic of counting means refusing to look at border deaths from the standpoint of this governmental gaze – migration agencies or states – and taking into account what border deaths are for the friends and the relatives of the missing migrants. This means engaging in a decolonial move that challenges the logic of recognition that sustains political campaigns and research projects aiming to count and identify dead migrants. By moving from the northern to the southern shore of the Mediterranean we realize that these uncounted deaths not only have a name but are fully known by their friends and relatives. Rather than producing a more exact border deaths population database, it is a question of bringing into visibility the reality of what the visa regime and the European mechanisms of border control generate: the ‘disappearance’ of women and men who die without being detected but who are counted as ‘missing’ in the countries of origin or of transit by those who know them. The logic of identification – giving a name to corpses found at sea – risks, paradoxically, reproducing the hierarchy that assumes dead migrants are people who, in order to exist, have to be recognized, counted and named from the northern shore of the Mediterranean. A politics that accounts for border deaths without reproducing this space of governmentality attends to what exists beyond counting and identification: unaccountable deaths represent the unquantifiable ‘cost’ of borders that cannot be assessed from the northern shore of the Mediterranean and that requires taking into account those people – friends and relatives – for whom they are missing persons. 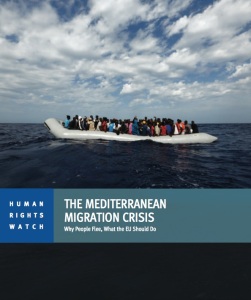 Last week, Human Rights Watch issued a report on The Mediterranean Migration Crisis: Why People Flee, What the EU Should Do; the map at the head of this post identifies sample migration routes derived from the interviews carried out by HRW for its report:

The report draws on Human Rights Watch’s extensive work on the human rights situation in the four main sending countries as well as interviews with Syrians, Eritreans, Afghans, and Somalis who crossed the Mediterranean in May 2015. Human Rights Watch staff interviewed over 150 recently-arrived migrants and asylum seekers in Italy (Lampedusa, Catania, and Milan) and Greece (the islands of Lesbos, Chios, Samos, Leros, and Kos).

Note: For those who had the good fortune to escape spatial science in the 1960s and 70s, and who might well be puzzled by my title, gravity models were (and probably still are) one of the canonical forms of migration modelling.  Martina’s commentary is an urgent reminder of the gravity that lies behind the politics of calibration and calculation.