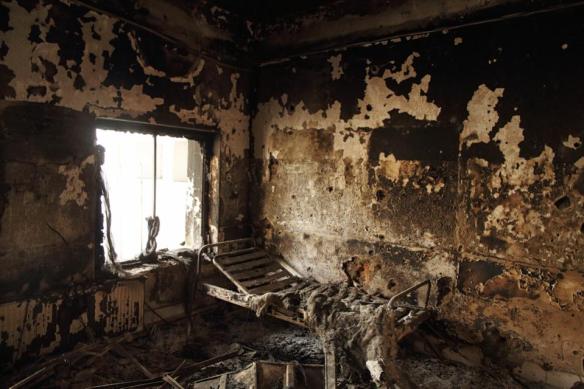 An update to my post (which I’ve updated several times) on the US air strike on the hospital in Kunduz early last month: MSF has released an internal review of the events that took place that night.  It’s only a preliminary report – the inquiry is ongoing – but it makes for grim reading.

MSF opened its Kunduz Trauma Center in August 2011, providing free, high-quality surgical care to all those who needed it (for more on MSF and other medical charities in Afghanistan, see my post on ‘The prosthetics of military violence’ here).

By the end of September 2015 the original 92 beds had grown to 140 as the numbers being treated grew: 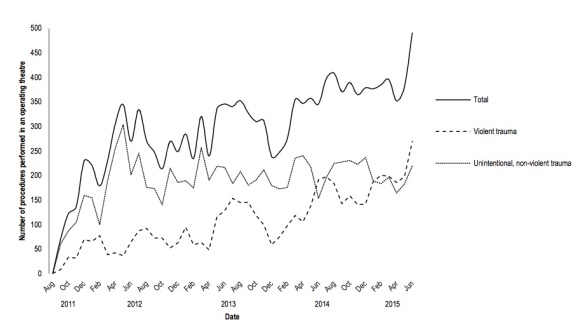 MSF is an experienced, highly regarded relief organisation and so it comes as no surprise to learn that it was fully aware of the cardinal principle of medical neutrality and took all possible steps to secure the legal and military foundations on which it operated:

MSF activities in Kunduz were based on a thorough process to reach an agreement with all parties to the conflict to respect the neutrality of our medical facility. In Afghanistan, agreements were reached with the health authorities of both the government of Afghanistan and health authorities affiliated with the relevant armed opposition groups. These agreements contain specific reference to the applicable sections of International Humanitarian Law including:

The report makes it clear that this had been clearly endorsed by all the military and paramilitary parties to the conflict.

Fighting intensified in the week before the air strike.  Most of those treated since the Trauma Center opened had been from the Afghan government side, but from Monday 28 September ‘this shifted to primarily wounded Taliban combatants.’  The Afghan government speedily arranged the transfer of all its patients (apart from the most severely wounded cases) to another hospital.  By that night the Taliban announced that it was in control of the district.

The next day, as the numbers seeking treatment increased yet again, MSF reconfirmed the GPS co-ordinates of the Trauma Center with both the Afghan authorities and the US military.

On Thursday 1 October MSF was asked by Carter Malkasian, a a special adviser to the Chairman of the Joint Chiefs of Staff, whether the hospital ‘had a large number of Taliban “holed up” and enquired about the safety of [MSF] staff’ and was told that its staff ‘were working at full capacity’ and that the hospital ‘was full of patients including wounded Taliban combatants’.  And because the Taliban were hors de combat they were not a legitimate military target: there is absolutely no ambiguity about this.

That same day a UN civilian/military liason ‘advised MSF to remain within the GPS coordinates provided to all parties to the conflict as “bombing is ongoing in Kunduz.”’

On Friday 2 October two large MSF flags were placed on the roof of the hospital.  That night the hospital was calm, there was no fighting taking place within the vicinity and MSF insists that there were no armed combatants in the buildings or the grounds of the hospital.

The air strikes began soon after 2 a.m. on Saturday 3 October, and throughout the attack – which lasted for over an hour – MSF made repeated attempts to stop the assault: 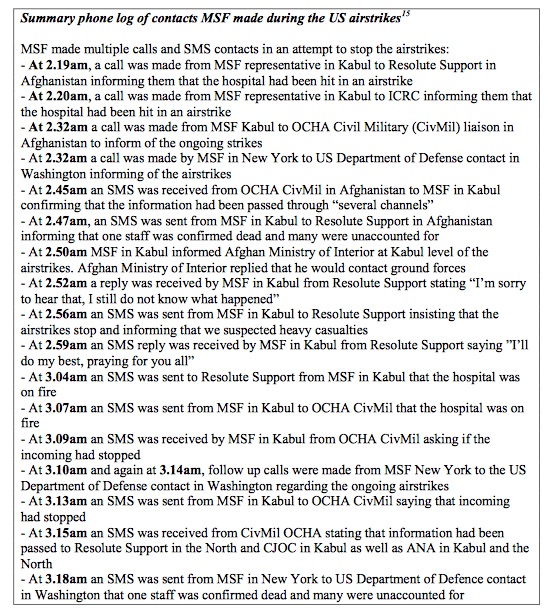 And yet, despite everything the US military had been told in advance and despite these repeated attempts to stop the air strikes, an AC-130 gunship made five repeated passes:

A series of multiple, precise and sustained airstrikes targeted the main hospital building, leaving the rest of the buildings in the MSF compound comparatively untouched. This specific building of the hospital correlates exactly with the GPS coordinates provided to the parties to the conflict [my emphasis]. 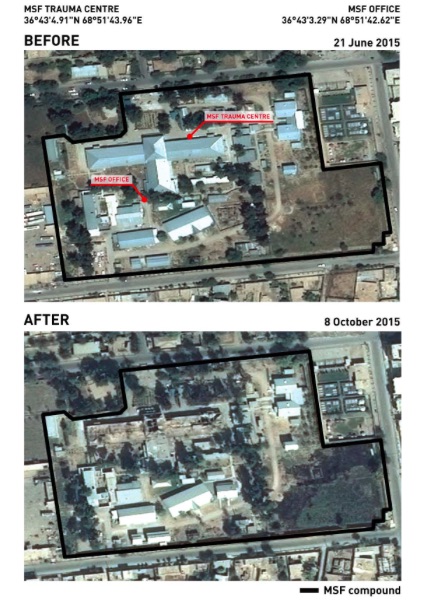 ‘The question remains as to whether our hospital lost its protected status in the eyes of the military forces engaged in this attack – and if so, why. The answer does not lie within the MSF hospital. Those responsible for requesting, ordering and approving the airstrikes hold these answers’.

So far, controlled leaks from the US military investigation have suggested that an Afghan ‘rapid reaction force’ requested the attack, that it had been rushed to Kunduz from elsewhere in Afghanistan, arriving ‘just days before the air strike’, and that it had no experience in working with the US ground troops from the Third Special Forces Group who relayed the request for ‘aerial fires’ to the Joint Operations Center at Kunduz airfield.  The Green Berets ‘were aware it was a functioning hospital,’ AP reported, ‘but believed it was under Taliban control.’  The report continues:

The Green Berets had asked for Air Force intelligence-gathering flights over the hospital, and both Green Berets and Air Force personnel were aware it was a protected medical facility, the records show, according to the two people who have seen the documents.

The analysts’ dossier included maps with the hospital circled, along with indications that intelligence agencies were tracking the location of [an] … operative [from Pakistan’s Inter-Services Intelligence directorate who was allegedly co-ordinating Taliban operations in the area] and activity reports based on overhead surveillance, according to a former intelligence official who is familiar with some of the documents. The intelligence suggested the hospital was being used as a Taliban command and control center and may have housed heavy weapons.

… the crew of the AC-130, call sign Hammer, verified their permission to fire twice before engaging the hospital. AC-130Us carry a crew of 14, often including a special forces liaison officer responsible for communicating with ground units.

And the US troops remained in contact with the AC-130 gunship throughout the attacks.

So even if you accept all these unverified claims about the intelligence (or lack of it) behind the air strikes, you surely have to wonder about the studied lack of response to the repeated calls to have the attacks stopped.  Bear in mind, too, that the AC-130 has a sophisticated sensor suite on board, including IR and low-light cameras, that the hospital kept its lights on throughout the night (it was one of the few buildings in the city whose electricity was still working), and that MSF staff were advised to remain inside the co-ordinate grid they had given to the military: which turned out to be the very co-ordinates used for the attack.  It seems dismally clear that the trauma center was precisely targeted and that it could not have been mistaken for any other building.

Regular readers will know that the US military has repeatedly relied on an elaborate bio-medical discourse to legitimise its actions (for a brilliant recent discussion, see Elke Schwarz‘s ‘Prescription drones: on the techno-biopolitical regimes of contemporary ‘ethical killing’’, online early at Security Dialogue); the most familiar version, hideously ironic given the events in Kunduz, is the claim that the US military has an unprecedented ability to carry out ‘surgical strikes’…