Since my post on the use of drones to provide intelligence, surveillance and reconnaissance over Iraq and Syria I’ve been thinking about the image stream provided by Predators and Reapers.  Then I used an image from what I think must be an MQ-9 Reaper operated by France which was in full colour and – this is the important part – in high definition.  Over the weekend the New York Times published a report, culled from the Italian magazine L’Espresso, which – together with the accompanying video clip (the link is to the Italian original not the Times version) – confirmed the power of HD full motion video, this time from a Reaper operated by Italy:

The footage … begins with grainy black-and-white images of an airstrike on what appears to have been a checkpoint on a road in northern Iraq, beneath a huge black flag.

Then there is something altogether different: high-resolution, color video of four distinct armed figures walking out of a house and along the streets of a town. At one stage, the picture suddenly zooms in on two of the suspected militants to reveal that one of them is almost certainly a child, propping a rifle on his shoulder that indicates how small he is relative to the man next to him. The images are so clear that even the shadows of the figures can be examined. 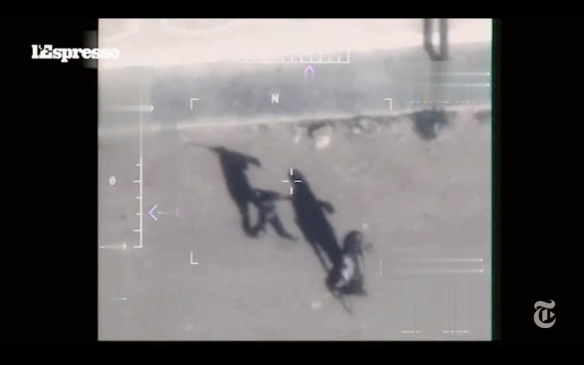 But the significance of all this is less straightforward than it might appear.

First, not all drones have this HD capability.  We know from investigations into civilian casualty incidents in Afghanistan that the feeds from Predators but also early model (‘Block’) Reapers are frequently grainy and imprecise.  Sean Davies reports that the video compression necessary for data transmission squeezed 560 x 480 pixel resolution images into 3.2 MBps at 30 frames per second whereas the newer (Block 5) Reapers provide 1280 x 720 pixel resolution images resolution images at 6.4 MBps.  The enhanced video feeds can be transmitted not only to the Ground Control Stations from which the aircraft are flown – and those too have been upgraded (see image below) – but also to operations centres monitoring the missions and, crucially, to ruggedized laptops (‘ROVERs’) used by special forces and other troops on the ground.

The significance of HD full-motion video is revealed in the slide below, taken from a briefing on ‘small footprint operations’ in Somalia and Yemen prepared in February 2013 and published as part of The Intercept‘s Drone Papers, which summarises its impact on the crucial middle stage of the ‘find, fix, finish‘ cycle of targeted killing: 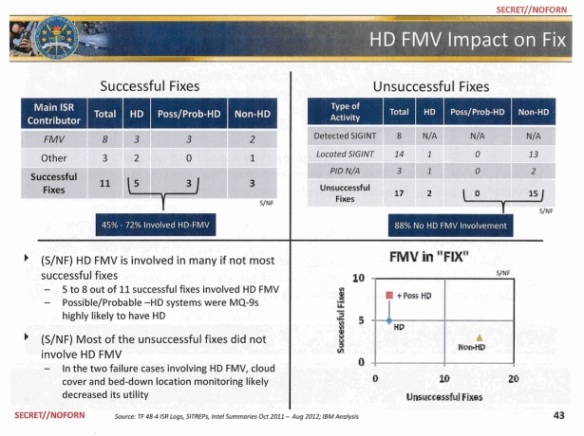 Second, Eyal Weizman cautions that the image stream shown on the Italian video was captured ‘either very early or very late in the day.  Without shadows we could not identify these as weapons at all.’  Infra-red images captured at night could obviously not provide definition of this quality, but even so-called ‘Day TV’ would not show clear shadows at most times of the day. In Eyal’s view, ‘showing these rare instances could skew our understanding of how much can be seen by drones and how clear what we see is.’

Third, no matter how high the resolution of the video feeds, we need to remember that their interpretation is a techno-cultural process.  One of the figures shown in the Italian video ‘is almost certainly a child’, reports the New York Times.  So bear in mind this exchange between the crew of a Predator circling over three vehicles travelling through the mountains of Uruzgan in February 2010 (see also here and here):

1 thought on “Matters of definition”