My time in the archives at the Imperial War Museum this summer was very productive and I made considerable headway in completing my work on casualty evacuation from the Western Front in the First World War and from North Africa in the Second – more on that later.  In the letters and diaries written from Belgium and France I found many, scattered references to the presence of non-Caucasian troops, especially from North Africa and India; as I’ve noted before, it was not all white on the Western Front. 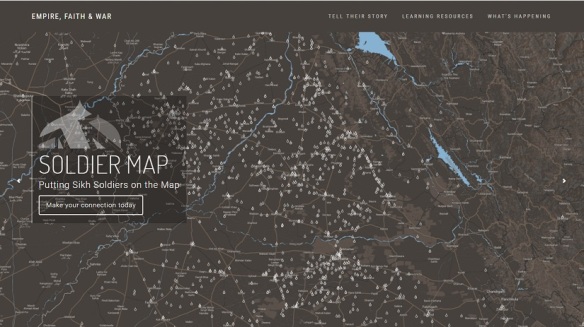 But apart from the heroic work of scholars like Santanu Das there have been few attempts to piece these fragments together.  I’ve now discovered a website, Empire, Faith and War, that aims to put the contribution of Sikhs literally on the map (though it’s much more than an exercise in cartography):

As the world turns its attention to the centenary of the Great War of 1914-18, the ‘Empire, Faith & War’ project aims to commemorate the remarkable but largely forgotten contribution and experiences of the Sikhs during this epochal period in world history.

From the blood-soaked trenches of the Somme and Gallipoli, to the deserts and heat of Africa and the Middle East, Sikhs fought and died alongside their British, Indian and Commonwealth counterparts to serve the greater good, gaining commendations and a reputation as fearsome and fearless soldiers.

Although accounting for less than 2% of the population of British India at the time, Sikhs made up more than 20% of the British Indian Army at the outbreak of hostilities. They and their comrades in arms proved to be critical in the early months of the fighting on the Western Front, helping save the allies from an early and ignominious defeat.

Wartime generations and their stories fading fast, and current and future generations losing vital links to this monumental past.

There’s probably not a single Sikh in the UK who doesn’t have a military connection in their family history. It is often because of those links to the armies of the British Raj that many Sikhs now reside in the UK.

And yet the role of Sikhs in World War One is a largely unknown aspect of the Allied war effort and indeed of the British story.

By revealing these untold stories we aim to help shed much needed light on both their sacrifice, but also on the contribution of all of the non-white allied forces from across the British Empire.

This is possibly our last opportunity to discover and record the stories of how one of the world’s smaller communities played such a disproportionately large role in the ‘war to end all wars’.

Apoorva Sripathi has a good account of the background to the project here.