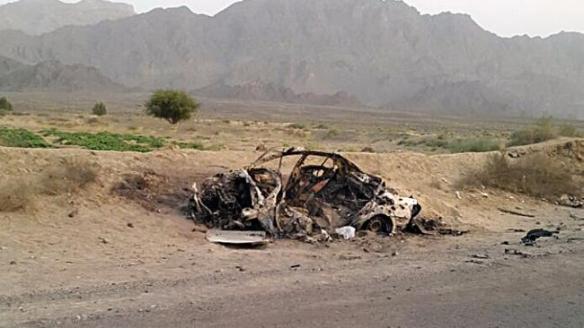 I have – at long last – finished the longform version of “Dirty dancing: drones and death in the borderlands“, which analyses drone strikes in Pakistan’s Federally Administered Tribal Areas and situates them within a wider context of military violence in the region.  You can find it under the DOWNLOADS tab, but I’ve pasted the conclusion below; there’s also a video of the last presentation I gave under that title here.

To make sense of the conclusion, I should explain that the essay opens by juxtaposing the killing of two people, Baitullah Mehsud (leader of the Pakistan Taliban) and Mamana Bibi (a village midwife), to pose the question: what kinds of spaces are the FATA made to be for incidents like these – incidents as unlike as these – to be possible?

The first is the space of exception – a space in which people are knowingly and deliberately exposed to death through the political-juridical removal of legal protections and affordances that would otherwise be available to them.  My version of this is different from that proposed by Giorgio Agamben, and far from invoking a suspension of the law I explore three legal geographies that have been used to prepare the ground for aerial violence in the borderlands.

The second is the space of execution; here I riff off Owen Sheers‘ perceptive remark about ‘the territory of the screen’ (as I note, ‘Killing somebody with a Hellfire missile controlled from thousands of miles away depends upon a screen – or more accurately a series of screens – on which the image of a human body will eventually be touched by the cross-hairs of a targeting pod’).  Owen’s phrase is much more than metaphor, so I treat ‘territory’ as a (bio)political technology whose calibrations enable states to assert, enact and enforce a claim over bodies-in-space (you can no doubt hear the echoes of Stuart Elden) and then explore the technicity involved in three of its screen elements that jointly transform the FATA into a space of execution: kill lists, signals intercepts and visual feeds. 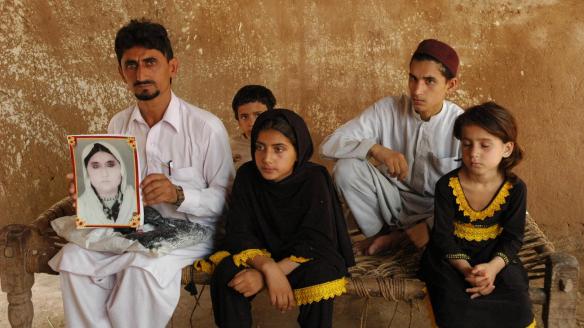 Here, then, is the conclusion:

The production of the borderlands as spaces of exception and spaces of execution are attempts to force those who live there into particular subject-positions as a means of subjugation. These positions are partial and precarious but the project to establish them as legitimate and rational has consequences that are material and affective. They clearly affect those targeted – people like Baitullah Mehsud – whose political agency exceeds in terrifying ways the normative space allowed them by the state of Pakistan and the United States and in so doing brings their actions to the attention of both. But they also impact the rest of the population in the FATA, constricting their mobilities and stoking their fears to such a degree that ‘normal life’ for many of them threatens to become a memory or a fantasy. Their existence is rendered more precarious because the subject-positions to which they are so brutally assigned are racialized. These are ‘tribal peoples’, different from those who inhabit ‘mainland Pakistan’, while the United States writes off their incidental deaths as ‘collateral damage’ whose anonymity confers on them no individuality only a collective ascription. When a CIA-directed drone strike on a compound in the Shawal Valley of South Waziristan on 15 January 2015 was found to have killed not only a deputy leader of al-Qaeda in the Indian subcontinent and a local Taliban commander but also two hostages, an American development contractor and an Italian aid worker, a ‘grim-faced’ and ‘visibly moved’ Obama made a personal and public apology. [i] The rarity of the gesture is revealing. For the value of their lives was acknowledged and their deaths were made grievable in ways that others – which is to say Others – were not. Nobody has ever accepted responsibility or apologised for the death of Mamana Bibi or any of the other innocent victims of aerial violence.

For this reason it is important to resist those versions of the space of exception that are complicit in the denial of agency to those who live within its confines. The state of Pakistan administers the inhabitants of the FATA through Political Agents: but this does not remove (though it does diminish) their own political agency. Pakistan’s armed forces conduct clearing operations that ruthlessly drive people from their homes and into camps for displaced persons: but this does not turn the FATA into one vast ‘camp’. The presence of US drones strips those who live under them of their well-being and dignity: but this does not reduce them to ‘bare life’. Similarly, the emergent subject that is produced within the space of execution, apprehended as a network trace, a sensor signature and a screen image, is a cipher that stands in for – and in the way of – a corporeal actor whose existence is not measured by the calculative alone.

This version, or something very much like it, will appear in a collection edited by Caren Kaplan and Lisa Parks, Life in the Age of Drones.  But an (even longer!) version will eventually appear in my own book, with images and maps (you can find many of them scattered through my previous posts: for example here, here and here), so I really would welcome any comments or suggestions if you have time to read the full thing: derek.gregory@ubc.ca.

Over at the Paris Review Scott Beauchamp has a beautiful short essay that complements my own reading of Harry Parker‘s Anatomy of a Soldier: ‘Dearer to the Vultures‘.

Here’s how it begins:

My memories of war are fractured: faces disappear like smoke while literal plumes of smoke, their specific shapes and forms, linger on vividly for years. I remember the mesh netting, concrete, and dust smell of tower guard, but the events of entire months are completely gone. I remember the sound of a kid’s voice, but not anything he actually said. I guess that’s what Tim O’Brien meant when he wrote about Vietnam, “What sticks to memory, often, are those odd little fragments that have no beginning or end.”

Memories of people, too complex to carry through the years, fall apart. It’s easier to find purchase on memories of objects. The weapon I was assigned on my first deployment to Iraq was an M249 SAW, or what we would colloquially and inaccurately refer to as the “Squad Assault Weapon.” I remember the way it felt to disassemble—the slight give of the heat-shield assembly, its tiny metal pincers clinging to the barrel. I remember the sound of the feed tray snapping shut on a belt of ammunition. And I remember the tiny rust deposits on the legs of my weapon’s bipod, which would never go away, no matter how hard I scrubbed with CLP (Cleaner, Lubricant, and Protectant oil). I remember my SAW’s voice and the things it said.

During my second deployment, I served as the gunner in a Bradley Fighting Vehicle. We ran over two Soviet-era landmines that had been stacked on top of each other. Besides a few bruises and perforated eardrums, everyone in the crew was fine. When I would try to tell people the story back home, civilians would get caught up on the descriptions of objects they had never heard of, objects that were integral to understanding my experience of the event. “Were you hurt?” Not really, I’d say, but my head slammed against the ISU, and since we had the BFT mounted in a weird place, that sort of got in the way. “What’s an ISU and a BFT?”

I came to realize that the barrier in explaining my injuries to civilians wasn’t quite phenomenological so much as it was ontological. Everyone has experienced pain, fear, and frustration, but not everyone knows what an Integrated Sight Unit is or has had their face slammed into one. Even in just trying to narrate the events to family members, it seemed like any understanding of my trauma would have to come through a knowledge of the materials around me that made the trauma possible: the ISU, the Bradley Fighting Vehicle, the way the tracks moved, the type of soil underneath the tracks, how the mine mechanism worked, the radios we used to call in the explosion to base.

Harry Parker, a former British Army Captain, recently published Anatomy of a Soldier, a novel that puts forward an object-oriented ontology of war: an assertion that the material objects sharing the battleground with humans play an equal role in the composition of reality itself.

And the rest is equally worth reading, including some interesting reflections on ‘the rush from the intimate to the inanimate’ –and its limitations.

I first wrote about Anatomy of a Soldier here, followed it up with a notice of an interview with Harry Parker at the Imperial War Museum here (where I’m currently working, deep in the Research Room), and finally summarised my conference presentation on the book and its implications in San Francisco here (‘Object Lessons’: the presentation slides are available under the DOWNLOADS tab).

I’ve just been reading and thinking about Lisa Parks‘s short but immensely suggestive essay, ‘Drones, Vertical Mediation, and the Targeted Class’, in Feminist Studies 42 (2016) 227-35. Lisa develops her ideas about vertical mediation but at the end of the essay she illustrates them through an art installation staged in Beirut last spring. This is what she says:

In an effort to publicize the drone’s vertical mediations—the way the technology uses the vertical field in efforts to materially reform life on earth—I collaborated with a group of Lebanese and Slovenian artists (Marc Abou Farhat, Tadej Fius, Elie Mouhanna, and Miha Vipotnik) to create a multimedia installation titled Spectral Configuration. The installation was part of the Vertical Collisions exhibition at the Station Art Gallery in Beirut in May 2015. The installation’s centerpiece is a massive, elevated, four-meter-long, supine human body, hand-crocheted out of thin aluminum wire. As it soars in mid-air, the wiry surface of this colossal corpse turns translucent as multiple media projections, made from video footage leaked from the US military-industrial complex, flicker around and upon it. These electromagnetic projections envelop the silvery drone-like body within the luminous footprint of world his- tory and militarization, cycling through a series of spectral suspects, framed targets, and aerial strikes that appear in visible light and infrared.

Circumnavigating the earth on an endless flight path, this “spectral configuration” not only captures and reflects light and heat waves, it remediates life on earth, altering one’s disposition to the sky, the ground, and the skin…  To make Spectral Configuration, we used the same global information networks, geospatial images, and video-capture technologies utilized each day by US drone operators. The difference, however, was that we commandeered these devices to conceptualize and produce a form and an event that would question the militarization of the vertical field by enacting it on a micro-scale and trying to make its effects intelligible and palpable to publics beyond drone war. By staging the militarization of the vertical field in a country adjacent to, yet not subject to drone war (Lebanon), Spectral Configuration also spoke to the exploitation of borders and associative relations by US drone operators and aroused concerns about the usage of the technology in the region.