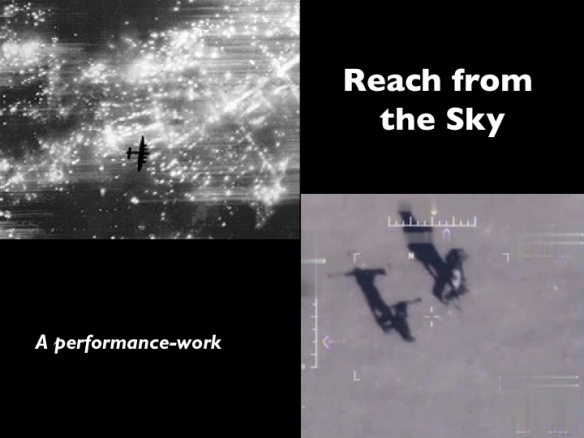 To complement the comparison implicit in my last post – between ‘manned’ and ‘unmanned’ military violence – I’ve added a presentation to those available under the DOWNLOADS tab.  I prepared it last month for an event at the Peter Wall Institute for Advanced Studies, where I performed it with my good friend Toph Marshall.  It’s part of my performance-work on bombing, and stages two cross-cutting monologues between a veteran from RAF Bomber Command who flew missions over France and Germany in the Second World War and a pilot at Creech Air Force Base in Nevada operating a Predator over Afghanistan.  As the title implies, it dramatises many of the themes I discuss in more analytical terms in my Tanner Lectures, ‘Reach from the Sky’.

For the performance, each speech was complemented by back-projected images.  Virtually all of the words were taken from ‘found texts’ – memoirs, diaries, letters and interviews – and the only consciously fictional lines were lifted from Andrew Niccol‘s Good Kill (and I’m sure that they originated in an interview with a real pilot).

It’s imperfect in all sorts of ways, and it is still very much a work in progress, but I’m posting it because it might be helpful for anyone teaching about aerial violence and its history.  If it is – or even (especially) if it is isn’t – I hope you’ll let me know.

As a supplement to my previous post on mapping the bombing of Germany in the Second World War, I thought I should draw attention to Lauren Turner‘s report on the maps RAF Bomber Command had drawn to show the effects of its raids on individual cities.  I described the construction of target maps in ‘Doors into nowhere’ (DOWNLOADS tab); these maps were compiled for the Blue Books kept by Arthur Harris as chief of Bomber Command (above). In the summer of 1943 Harris ordered the preparation of a large book (which eventually extended to several volumes) which would show the “spectacular” results of the bomber offensive. “After each attack on a German city,” he explained, “the area of devastation was progressively marked with blue paint over a mosaic of air photographs of the city as a whole”. Harris was immensely proud of this “inventory of destruction,” as Tami Biddle calls it, and showed it to all his prominent visitors (see also here for a short discussion of how blind Harris was to the strategic significance of his campaign).

Here, for example, is Cologne in November 1944:

The dark blue shows the area destroyed or badly damaged: you can also find more information about the damaged city in my post on the geometry of destruction here (which includes an early target map).

Lauren’s report for the BBC includes similar maps for Berlin and Dresden.