WAR | SPACE brings attention to the enduring but not inevitable nature of war and imagines a world without (para)military violence. It offers critical perspectives that eschew narratives of geopolitical grand strategy in favour of a people-centric view of war. By ‘people’ we mean not only the political and military architects of (para)military violence, but crucially also those civilians, soldiers, and fighters who are caught in the mighty cross-hairs of war.

In a famous 1985 essay, the American essayist and professor of English and American Literature and Language Elaine Scarry wrote: “the main purpose and outcome of war is injuring”. She points out that this fact is so obvious that it is often forgotten altogether. She continues:

“one can read many pages of an historic or strategic account of a particular military campaign, or listen to many installments in a newscast narrative of events in a contemporary war, without encountering the acknowledgment that the purpose of the event described is to alter (to burn, to blast, to shell, to cut) human tissue, as well as to alter the surface, shape, and deep entirety of the objects that human beings recognize as extensions of themselves.”

Scarry’s words ring truer than ever 30 years on. The genres to which she refers are still replete with pages and reels devoted to what might best be described as Clean War. Clean War is full of euphemism and offers a bloodless, glossy account of war in which ‘we’ defeat the barbarians with law, ethics and an overflowing vocabulary of legitimisation on our side. In Clean War only the bad guys die; actually, they are simply taken out, liquidated, targeted, replaced or disposed. They are not mourned, for there is no life that has been lost; nobody – and no body – to mourn, to speak with Judith Butler.  In his famous essay Politics and the English Language, George Orwell described a version of Clean War as “the defence of the indefensible”. He wrote:

“[P]olitical language has to consist largely of euphemism, question-begging and sheer cloudy vagueness. Defenceless villages are bombarded from the air, the inhabitants driven out into the countryside, the cattle machine-gunned, the huts set on fire with incendiary bullets: this is called pacification. Millions of peasants are robbed of their farms and sent trudging along the roads with no more than they can carry: this is called transfer of population or rectification of frontiers. People are imprisoned for years without trial, or shot in the back of the neck or sent to die of scurvy in Arctic lumber camps: this is called elimination of unreliable elements.”

And so it is with precise, clean, surgical, just, legal, necessary, and proportional war today. So much so that we must constantly remind ourselves, pace Scarry, that first and foremost, war is injury.

Craig adds that he’s also looking for ‘collaborators and authors to expand this project to include cutting edge critical thinking about war, especially in the Middle East and North Africa.

If you are interested in joining this project or would like to contribute in any way please email: craig . jones at ncl. ac . uk.

Victims of (para)military violence, academics, journalists, activists and interested citizens are encouraged to get in touch.

If you have three minutes to spare, want to know how the incorporation of military lawyers into the so-called ‘kill-chain’ affects the conduct of later modern war by the United States and the Israeli military, and want a master-class in presentation watch Craig Jones‘ video on The War Lawyers here (scroll down). 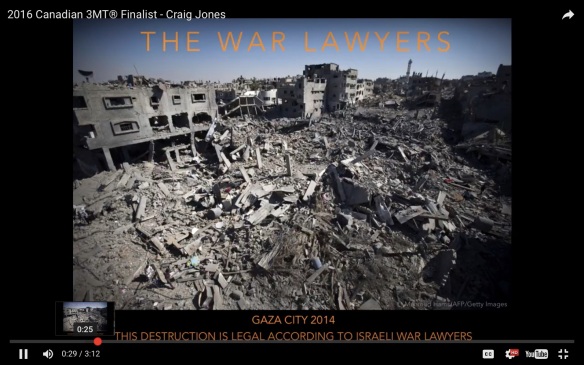 This comes from Canada’s Three Minute Thesis (3MT) competition, in which graduate students present their thesis in just three minutes.  There are all sorts of rules and restrictions – not least in the use of graphics, in which Craig excels too – but the result is none the less remarkable.  Craig aced UBC’s 3MT competition on 10 March, where he competed against 100 other graduate students and also won the People’s Choice Award, and went on to win the Western Canada final on 29 April; the national final takes place online (you can vote here until 19 May), and Craig will also represent UBC in the Universitas 21 International 3MT competition in the fall.

I don’t know how long that video will be up, so in case it should disappear I’ve embedded Craig’s first presentation (at UBC) from YouTube below:

Craig’s thesis will be submitted during the summer, and from what I’ve read so far it will be a major book in very short order.  Meanwhile if you don’t know his work you can find out more at his blog War, law, space; you can also access a number of his papers there (under his DOWNLOADS tab), including ‘Frames of law: targeting advice and operational law in the Israeli military’, Society & Space 33 (4) (2015) 676-96 [from the special issue on ‘War, law and space’ Craig co-edited with Michael Smith] and  ‘Lawfare and the juridification of late modern war’, Progress in human geography 40 (2) (2016) 221-239.