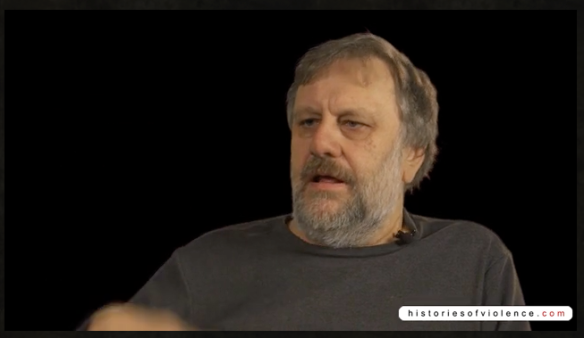 I discussed the History of Violence project’s Disposable Life series when it was first announced here.  Introducing the series, the Project’s Director Brad Evans explains:

“Mass violence is poorly understood if it simply refers to casualties on battlefields or continues to be framed through conventional notions of warfare. We need to interrogate the multiple ways in which entire populations are rendered disposable on a daily basis if we are to take seriously the meaning of global citizenship in the 21st Century”.

Nine videos have been produced so far, and you can access the first eight here; the latest comes from Slavoj Zizek:

For Zizek, the issue of ‘disposable lives’ in the contemporary period does not simply relate to some small or invisible minority. According to the new logics of global capitalism, the vast majority of the worlds citizens (including almost entire Nations) are deemed to be worthless and superfluous to its productive needs. Not only does this point to new forms of apartheid as the global cartography for power seeks to police hierarchies of disposability, it further points to a nihilistic future wherein the aspirations of many are already being sacrificed.

You can access the video through the links above or directly from vimeo here.  Not my favourite theorist or commentator, but worth watching not least for the one-liner about Sloterdijk (at 4.06 if you’re really busy).  What he takes from Sloterdijk is this:

‘”global” means there is a globe which is not all-encompassing, it’s a globe where from within you think it’s endless, all encompassing, you see it all, but no, it excludes…’

I agree with Brad’s framing of the project – impossible not to, I think – but once you start to imagine the global in these (un)exceptionable terms,  both conventional and unconventional modes of warfare start to seep back in to the discussion.  For on those now radically dispersed and discontinuous battle spaces whole populations are being rendered disposable on a daily basis.

Histories of Violence launches its tremendously important (and equally ambitious) Disposable Life project, which Brad Evans explains like this:

“Mass violence is poorly understood if it simply refers to casualties on battlefields or continues to be framed through conventional notions of warfare. We need to interrogate the multiple ways in which entire populations are rendered disposable on a daily basis if we are to take seriously the meaning of global citizenship in the 21st Century”. (Brad Evans, Project Director)

Throughout the Twentieth Century, violence was ceaselessly waged against targeted populations deemed to be “disposable”. The years 2014-2016 will be a poignant moment to reflect upon the historical significance and contemporary meaning of these mass atrocities. The period begins with the 20th anniversary of the Zapatista uprising which provided a contemporary frame on the history of indigenous and racial persecution. April 2014 will mark the 20th anniversary of the Rwandan genocide which exposed to a watching global community the horrifying legacy of colonialism, along with its lasting and unresolved implications. June 2014 bears witness to the 100th anniversary of the outbreak of World War I which remains one of the bloodiest conflicts in human history. Onto January 2015, we confront the historical memory of the violence of Auschwitz which taught us the shame of being human. The year also witnesses the 70th anniversaries of the bombings of Hiroshima & Nagasaki that still serve as a horrifying reminder of the devastating potential of weapons of mass destruction and the capacity to reason widespread destruction; the 100th anniversary of the Armenian “genocide” which remains a source of contention and passionate debate in terms of its definition and political vocabulary; the 65th anniversary of the start of the Korea War that continues to have profound impact upon global ideas of security and peaceful co-habitation; the 60th anniversary of the official start of Vietnam War (from United States perspective) whose targeted violence against local populations and biospheres in particular fundamentally challenged claims of Western superiority and enlightenment; along with the 40th anniversary of the beginning of the “killing fields” in Cambodia which remains one of the most violent experimental episodes in the history of human existence.

There is no doubt a need to collectively memorialise these traumatic events and remember the devastating loss of life. Any attempt to create more just futures must have an appreciation of these histories of violence. There is also a need however to move beyond the historicity of memorialisation to critically question their contemporary significance in terms of providing a more honest and somber reflection of the present conjuncture. This requires us to move beyond the dominant Western tropes for conceptualising such violence as either exceptional in history or the result of a failure of liberal modernity. Disposability may take many different forms. It cannot be reduced to simplistic explanations. Nor can it be properly understood without engaging its underlying causes that may be of a political, economic, cultural, social, psychological and identity based nature. Only then might we start to rethink the terms of global citizenship in the 21st Century. With this in mind, the initiative is compelled to ask: Are there, for instance, aspects of contemporary global society that make it possible to think and act in ways that render specific populations disposable? How might we commemorate these tragic events in ways that will cultivate a deeper understanding of the conditions that give rise to extreme violence? Is it correct to argue that we now live in a post-colonial and post-racial moment? Or are there continued remnants from the brutality of colonialism that shapes relations amongst people today? What challenges does the notion of disposability pose for the integrity of social research? How should we engage the broader public in critical education and discussion around the various forms that violence has taken in the past and continues to take in the present? And how might we forge a truly trans-disciplinary pedagogy that connects the arts, humanities and social sciences such that we may engage more critically with the meaning of violence and the disposability of populations in the 21st Century?

This is excellent stuff, and from my point of view a critical question concerns the ways in which notions of ‘disposability’ circulate between (or perhaps more accurately among) the ‘battlefields and warfare’ with which the paragraph begins and the other spaces and spheres of social life to which it opens out.  I think this requires histories of violence, to be sure, but also geographies of violence – in short, historical geographies of violence.

The Project is launched with a short video from Cynthia Enloe, who ‘provides her original interpretation of the paradigm by exploring the meaning of disposability in the terms of the ways life continually appears arbitrary and nameless. For Enloe, not only does the problem of disposability point to contemporary forms of banality as earlier critiqued by Hannah Arendt, it allows us to rethink what it means to be humane in the 21st Century.’

For a partial list of future contributors, book projects and recommended readings, see here.  And keep watching that space!