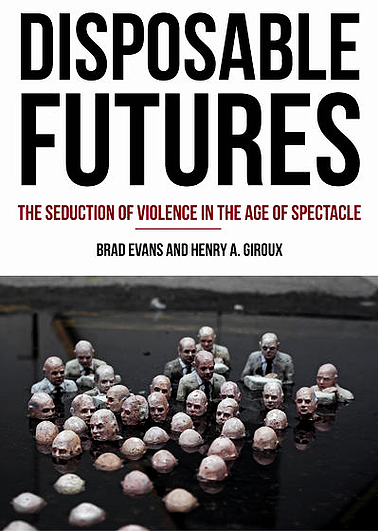 News from Brad Evans of a new book co-authored with Henry Giroux, Disposable futures: the seductions of violence in the age of spectacle (out next month from City Lights).

Disposable Futures makes the case that we have not just become desensitized to violence, but rather, that we are being taught to desire it.

From movies and other commercial entertainment to “extreme” weather and acts of terror, authors Brad Evans and Henry Giroux examine how a contemporary politics of spectacle–and disposability–curates what is seen and what is not, what is represented and what is ignored, and ultimately, whose lives matter and whose do not.

Disposable Futures explores the connections between a range of contemporary phenomena: mass surveillance, the militarization of police, the impact of violence in film and video games, increasing disparities in wealth, and representations of ISIS and the ongoing terror wars. Throughout, Evans and Giroux champion the significance of public education, social movements and ideas that rebel against the status quo in order render violence intolerable.

You can read the preface and an excerpt from the first chapter here, and you can get a taste of their argument from their op-ed for Truthout in June 2014 here, where they explain why they decided

‘…to develop a paradigm that focused on the intensification of what we called the politics of disposability. This requires taking our analysis beyond 20th century frames of analysis to look at the ways in which more and more individuals and groups are now considered excess by the onslaught of global forces that no longer offer the possibility of alternative futures. It talks precisely to those contemporary forms of disposability that have become so normalized; the burden of the guilt is placed on the shoulders of the victims, while the most pernicious of systemic abuses continues to hide things in plain sight. And it develops a critical angle of vision that goes well beyond the mere authentication of lives as simply born vulnerable to question the systemic design for oppression and exploitation that produces humans as some expendable category…

‘There is something, however, more at stake here than the contemporary plight of those millions forced to live in intolerable conditions. What makes the contemporary forms of disposability so abhorrent is precisely the way it shapes disposable futures. The future now appears to us as a terrain of endemic catastrophe and disorder from which there is no viable escape except to draw upon the logics of those predatory formations that put us there in the first place. Devoid of any alternative image of the world, we are merely requested to see the world as predestined and catastrophically fated. Frederic Jameson‘s claim then that it is easier to “imagine the end of the world than it is the end of capitalism” is more than a reflection on the poverty of contemporary imaginations. It is revealing of the nihilism of our times that forces us to accept that the only world conceivable is the one we are currently forced to endure: a world that is brutally reproduced and forces us all to become witness to its spectacles of violence that demand we accept that all things are ultimately insecure by design. In this suffocating climate, the best we can hope for is to be connected to some fragile and precarious life support system that may be withdrawn from us at any moment. Hope has dissolved into the pathology of social and civil death and the quest for mere survival. For if there is a clear lesson to living in these times, it is precisely that the lights can go out at any given moment, without any lasting concern for social responsibility. This is simply the natural order of things (so we are told) and we need to adapt our thinking accordingly.’

And, as always, you can find much more on these themes over at Brad’s History of Violence project (and particularly the Disposable Life series of lectures here).