As Craig Jones notes over at War, Law and Space, the renewed fighting between Hamas and the IDF is all too familiar; so too is the cartography.

In November 2012, the New York Times published two maps – one showing Israeli cities ‘taking enemy fire’ and the other showing the site of Israeli leaflet drops on Gaza (see my discussion here).

This time round, the only maps available until today have shown the putative range of Hamas’s rockets and the strikes that have taken place in Israel: Gaza might just as well have been a blank space marked ‘here be monsters’ (which is, of course, exactly how the Netanyahu administration wants us to see it). 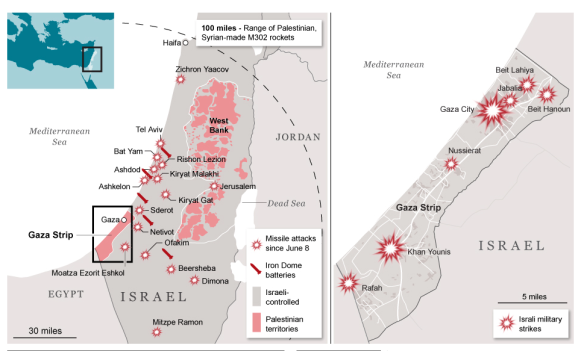 What the latest Israeli assault shows once again, however, is that the key on the left-hand map is misleading.  To juxtapose ‘Israeli-controlled’ with ‘Palestinian territories’ is like juxtaposing ‘fruit’ to ‘apples’.  So many domains of life – and death – in the Palestinian territories, in both the occupied West Bank and Gaza, remain firmly under Israeli control.