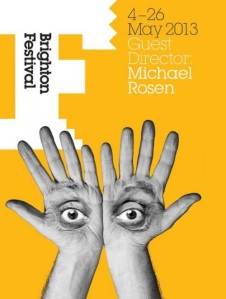 Two art projects from Lighthouse at the Brighton Festival in the UK this month (4-26 May); thanks to Sam Hind for the information.

James Bridle‘s work will be familiar to most readers, and in Brighton he’s reprising his Under the shadow of the drone, which is a true-to-scale rendering of a Reaper, this time on the seafront:

The stark marking out in an unexpected public space of a Reaper drone’s silhouette brings the reality of these technologies into our daily lives. The work critiques the way that contemporary networked technologies, while enabling the digitally saturated culture of the 21st century, can also obscure and distance us from political and moral responsibility.

“Drones are just the latest in a long line of military technologies augmenting the process of death-dealing, but they are among the most efficient, the most distancing, the most invisible. These qualities allow them to do what they do unseen.

“We all live under the shadow of the drone, although most of us are lucky enough not to live under its direct fire. But the attitude they represent – of technology used for obscuration and violence; of the obfuscation of morality and culpability; of the illusion of omniscience and omnipotence; of the lesser value of other people’s lives; of, frankly, endless war – should concern us all.”

And Lighthouse adds: ‘By superimposing a large-scale drawing of the shadow of a drone in an urban location in Brighton, Bridle brings these chilling machines uncomfortably close to us, embedding them into our daily lives, and in the process perhaps making the reality of the daily occurrence of deadly drone strikes more tangible.’ 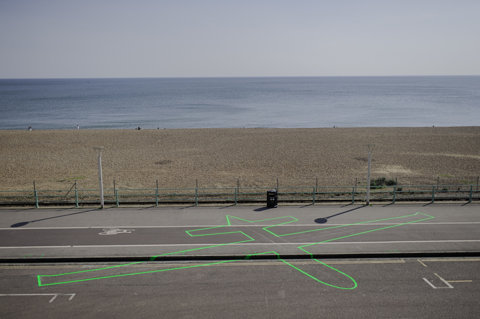 For me, some of Bridle’s other projects – like Dronestagram – are more effective in bringing the strikes (rather than the technology) down to earth and into the spaces of everyday life, but it’s still an arresting project.  Size and scale matter; I remember visiting the RAF Museum at Hendon and being truly astonished at how small a Lancaster bomber was – and yet how vast the bomb door in its belly.  If you’re in Brighton, you can find Bridle’s rendering 5 minutes/500 metres walk east from the Brighton Wheel on Marine Parade, towards Yellowave Beach Sports Venue; then look down to Madeira Drive.

The second is Mariele Neudecker‘s The air itself is one vast library (a quotation from Charles Babbage), originally shown in 2010:

… an exhibition of startling images that explore the disturbing, and often invisible, technologies of war. In dramatic contrast with her more familiar depictions of landscape and the sublimity of nature, this highly topical study brings us face to face with weapons of mass destruction.

Neudecker’s artistic strategy is rooted in ‘ground truth’, a term used in remote sensing to describe data collected on location. Works created whilst on site at the historic Nike missile facility in the US are emblematic of Neudecker’s determination to go beyond mere representation. Her extraordinary graphite rubbings of vast Hercules missiles physically capture the object, making what is otherwise abstract and monstrous, tactile and present. Other works investigate military imaging and tactical communication, which provide us with new ways of detecting what is intended to be camouflaged and out of view.

You can see this at Lighthouse, 28 Kensington Street, Brighton, and preview images here.

For more on artworks, invisible military technologies and ‘geographies of seeing’, I thoroughly recommend honor harger‘s excellent reflections on Unmanned Aerial Ecologies here, which includes a series of brilliant images and commentaries on the work of Trevor Paglen and Marko Peljhan.  The latter is new to me and very interesting: the title for this post is taken not only from the military, which is appropriate enough, but also from one of Peljhan’s projects featured in honor’s essay.