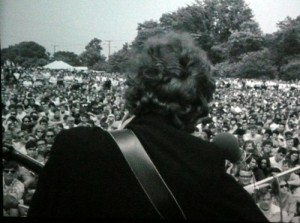 Following up my post on the music of war, Nadia Abu-Zahra has kindly directed me to an excellent website devoted to thousands of anti-war, pacifist and anti-militarist songs here.  It includes a searchable database, downloads and videos, and is a marvellous resource.

The curators explain the origins of the project, which went online the day the US-led war on Iraq started:

When rumours of a new war against Iraq started spreading more and more insistently, the members of two Italian Usenet newsgroups, it.fan.musica.gucciniand it.fan.musica.de-andre, and of two other mailing lists dedicated to Italian songwriters, “Fabrizio”and “Bielle” spontaneously began to collect a great number of antiwar songs which were posted every day… So, this site originates from the spontaneous reaction of a number of people, who have chosen to witness their opposition to this war, and to any war, by collecting antiwar songs and by putting them at everyone’s disposal.

(If you just want to see a quick list, try this one from Stop the War‘s ‘anti-war song of the week’: everything from Vera Lynn  – admittedly with Johnny Cash – to Radiohead).

I’ve also been digging around for materials on music and the Vietnam War, and here I can recommend David James, ‘The Vietnam War and American music’, Social text 22 (1989) 122-43 and Kenneth Bindas and Craig Houston, ‘”Takin’ Care of Business”: Rock music, Vietnam and the protest myth’, The Historian 52 (1989) 1-23: both of which may leave your illusions blowin’ in the wind…

UPDATE Dan Clayton adds this excellent suggestion: Kim Herzinger, ‘The soundtrack of Vietnam’, in A. Wiest, M. Barbier and G. Robbins (eds), America and the Vietnam War: re-examining the culture and history of a generation (Routledge, 2010), 255–71 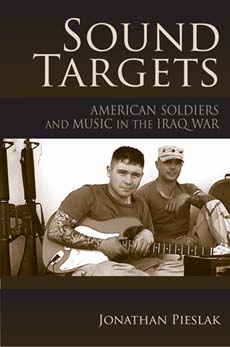 It seems an age since I talked about sound and war, but I haven’t been still(ed).  I’ve just finished Jonathan Pieslak‘s Sound Targets (Indiana, 2009), which adds another dimension to the discussion:

Though a part of American soldiers’ lives since the Revolutionary War, by World War II music could be broadcast to the front. Today it accompanies soldiers from the recruiting office to the battlefield. For this book, Jonathan Pieslak interviewed returning veterans to learn about the place of music in the Iraq War and in contemporary American military culture in general. Pieslak describes how American soldiers hear, share, use, and produce music both on and off duty. He studies the role of music from recruitment campaigns and basic training to its use “in country” before and during missions. Pieslak explores themes of power, chaos, violence, and survival in the metal and hip-hop music so popular among the troops, and offers insight into the daily lives of American soldiers in the Middle East.

As the blurb suggests, there’s a rich history to be traced here and I’ve only just started digging.

So far I’ve also enjoyed Glenn Watkins‘s Proof through the night: Music and the Great War (University of California Press, 2002) – the title is a line from the ‘Star-spangled banner’ – whose cover shows a Stravinsky manuscript on which the music for his four-hand Marche  (1914) is accompanied by percussive blasts from cannon roughed in by the composer himself.

‘Music in every nation gave “proof through the night” – ringing evidence during the dark hours of the war – not only of its historic role in the definition of nationhood and of nationalist resolve but also of its power on distant battlefields to recall home and hearth and to commemorate loss long after the guns had been stilled.’

So much is probably obvious, but there’s little else that is in this rewarding collection of essays/studies that constantly surprises by its engagements with a wider cultural politics and the sombre refrains of military violence.

High on the ‘to be read’ pile is Christina Baade’s Victory through harmony: the BBC and popular music in World War II (Oxford University Press, 2011), which has an accompanying website with music clips (but only if you’ve got the book so I haven’t included a link here).  The same publisher has also announced Annegret Fauser‘s Sounds of war: music in the United States during World War II for 1913, which apparently argues that ‘it was the role assigned specifically to classical music that truly distinguished musical life in the wartime United States’, so this may be rather narrower in scope than it looks.  Doesn’t look as though there will be much space for swing, jazz and bebop (or even Glenn Miller).

I’ve also rifled through Lee Andresen’s Battle notes: Music of the Vietnam War (Savage, 2003), which I retrieved from a bin in a second-hand bookstore, but I rapidly realised why it was where it was – so if anyone has any good suggestions for articles or books on what is such an obvious theme I’d be really Grateful (and not as in Dead).