I still regard Postmodern geographies as Ed Soja‘s finest book – his most considered and his most creative – and within that his essay on ‘Taking Los Angeles Apart‘ is surely the stand-out contribution.  By turns playful and passionate, it’s packed with insights about Los Angeles and late modern cities.  I discussed it at length in Geographical imaginations – the book not the blog – but the essay has come back to haunt me ever since I learned of an extraordinary new book which I know Ed would have read with the greatest interest. 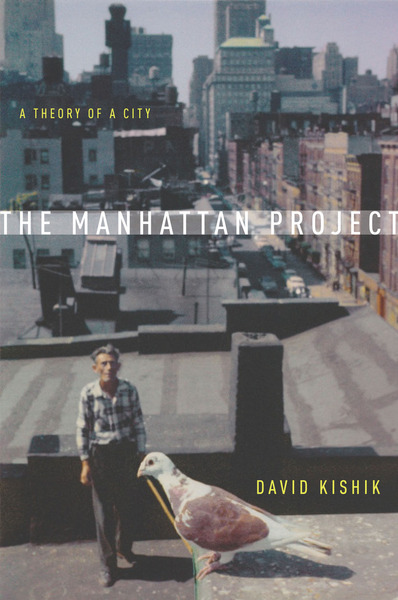 It’s David Kishik‘s The Manhattan Project, which I stumbled across because of its title and my new-found interest in seeing drones through post-atomic eyes.  But it’s not about that Manhattan Project at all.  Instead, it riffs on Benjamin’s Arcades Project in the most astonishing of ways:

In The Manhattan Project, David Kishik dares to imagine a Walter Benjamin who did not commit suicide in 1940, but managed instead to escape the Nazis to begin a long, solitary life in New York. During his anonymous, posthumous existence, while he was haunting and haunted by his new city, Benjamin composed a sequel to his Arcades Project. Just as his incomplete masterpiece revolved around Paris, capital of the nineteenth century, this spectral text was dedicated to New York, capital of the twentieth. Kishik’s sui generis work of experimental scholarship or fictional philosophy is thus presented as a study of a manuscript that was never written.

The fictitious prolongation of Benjamin’s life will raise more than one eyebrow, but the wit, breadth, and incisiveness of Kishik’s own writing is bound to impress. Kishik reveals a world of secret affinities between New York City and Paris, the flâneur and the homeless person, the collector and the hoarder, the covered arcade and the bare street, but also between photography and graffiti, pragmatism and minimalism, Andy Warhol and Robert Moses, Hannah Arendt and Jane Jacobs. A critical celebration of New York City, The Manhattan Project reshapes our perception of urban life, and rethinks our very conception of modernity.

Another good friend who is sadly no longer with us, Allan Pred, would surely have relished that too. I’m sure Ed would have insisted that Benjamin would never have gone to New York and that, in common with Adorno, he would have sought refuge in L.A. (where else? In fact Adorno left New York for LA, though it’s impossible to think of Ed calling that ‘exile’).

You can read the Introduction to The Manhattan Project here and an extract from the first chapter here; there’s also an extended interview with David about the project here.

Finally, there’s an excellent review by Dustin Illingworth at The Brooklyn Rail here.  When Dustin says this –

Like Borges’s “Aleph,” New York is “the place where, without admixture or confusion, all the places of the world, seen from every angle, coexist.” It is therefore much to Kishik’s credit that his slim volume, a drop in the vast ocean of literature on the city, packs such a considerable theoretical punch.

– then we are back with Ed Soja’s essay, which also began with an appeal to The Aleph and also packed a considerable theoretical punch.