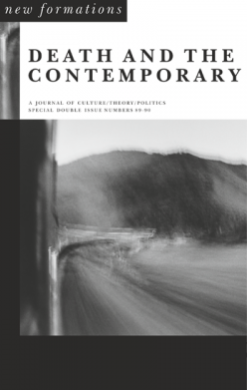 The latest (double) issue of New Formations (89/90: 2017) is devoted to ‘Death and the Contemporary’, and it includes two essays likely to be of particular interest to readers of this blog.

First, François Debrix, ‘Horror beyond Death: Geopolitics and the pulverisation of the human‘:

From territorial conquests or wars of attrition to the concentration camps or policies of control of displaced populations, the biopolitical capture of human life in configurations of geopolitical power has often involved the putting to death of populations. While, following Foucault’s work, we can argue that late modern political power has been concerned with the management of people’s lives or with the ‘health’ of a population, this capacity to ‘make live and let die’ (as Foucault put it) is never separate from a modality of force premised upon a right to put to death. Thus, the distinction between biopolitics and what has been called thanatopolitics or necropolitics can no longer be guaranteed. The goal of this essay is to push further the biopolitical/ necropolitical argument by showing that, in key contemporary instances of geopolitical violence and destruction, the life and/or death of populations and individual bodies is not a primary concern. What is of concern, rather, is what I have called the pulverization of the human. I consider this targeting of the human, or of humanity itself, to be a matter of horror. Horror’s aim, when it enters the domain of geopolitical destruction, appears to be to put bodies to death. But, more crucially, its aim is to render human bodies, beyond the fact of life and death, unrecognizable, unidentifiable, and sometimes undistinguishable from non-human matter. Horror does not care to recompose human life or humanity. This essay briefly details the argument about horror and horror’s ‘objectives’ beyond death. It also takes issue with recent theories that have argued that traces of human life can be recovered from contemporary instances of geopolitical violence and destruction. Finally, this essay offers two contemporary illustrations of horror’s targeting of the human by examining the role and place of horror in suicide bombings and in drone attacks.

‘Drone Poetics’ considers the challenge to the theory and practice of the lyric of the development of drone warfare. It argues that modernist writing has historically been influenced by aerial technology; drones also affect notions of perception, distance and intimacy, and the self-policing subject, with consequences for contemporary lyric. Indeed, drone artworks and poems proliferate; and while these take critical perspectives on drone operations, they have not reckoned with the phenomenological implications of execution from the air. I draw out six of these: the objectification of the target, the domination of visuality, psychic and operational splitting, the ‘everywhere war’, the intimacy of keyhole observations, and the mythic or psychoanalytic representation of desire and fear. These six tropes indicate the necessity for a radical revision of our thinking about the practice of writing committed poetry in the drone age.