I’m off to Toronto on Thursday to speak at the symposium “Through Post-Atomic Eyes“.  I posted some of my earlier notes for my presentation, ‘Little Boys and Blue Skies: Drones through post-atomic eyes‘, and since then I’ve been digging deeper into the strange intersections between nuclear weapons and today’s Predators and Reapers.

In my original post I described the US Air Force’s early attempts to devise a way of delivering atomic bombs from remotely piloted aircraft – notably Project Brass Ring:

Following a tip from Matt Farish (who will also be speaking at the conference) I’ve now discovered that drones were also used to monitor the ‘atomic clouds’.

Shortly after the Second World War the US Air Force’s Pilotless Aircraft Branch resumed its experiments with remotely controlling B-17 bombers from ‘director aircraft’ and from ground stations: 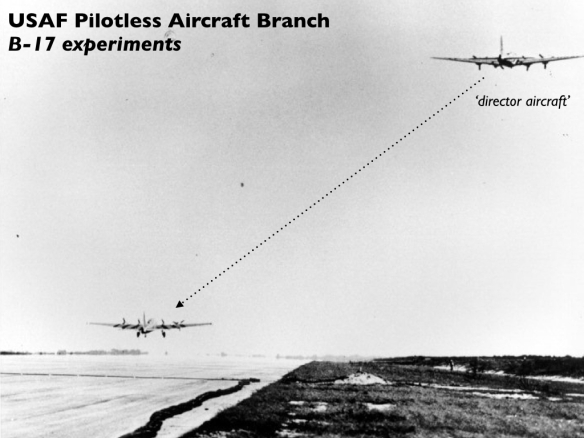 By July 1946 six to them were being successfully operated by the Army Air Group’s Drone Unit, and they were in action over Bikini Atoll in the Marshall Islands for the series of nuclear tests known as Operation Crossroads.   The first test (Able) was carried out on 1 July 1946, when a B-29 Superfortress (“Dave’s Dream”) dropped a plutonium bomb of the same power used against Nagasaki from a height of 30,000 feet on a target fleet of 90 obsolete ships; it was an air burst, detonating 520 feet above the ships (the aim point was the battleship USS Nevada, perhaps appropriately enough given that state’s use for nuclear testing in the decades ahead; it was painted bright red to make it visible to the bombardier, but the bomb missed it y 1870 feet). 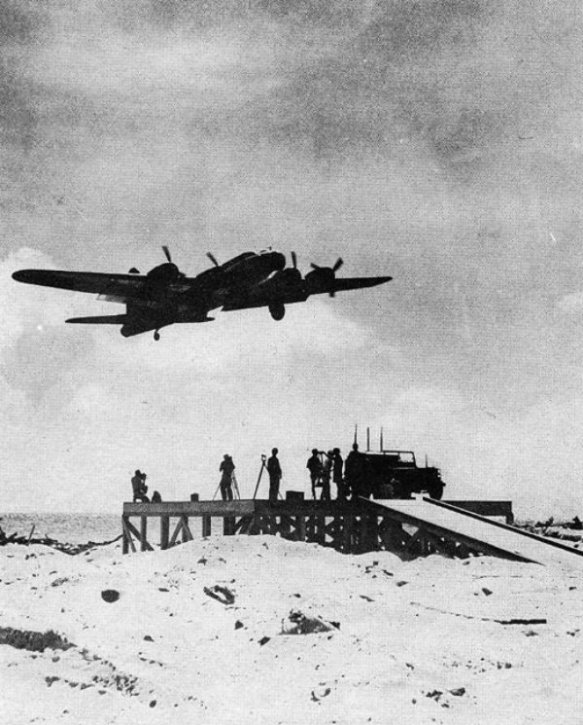 There was nothing secret about their use – like the bomb itself, making the drones public was a vital part of demonstrating American military and technical superiority.  Here, for example, is an image from Mechanix Illustrated in June 1946 describing Operation Crossroads :

According to Bombs at Bikini, the official (public) report on Operation Crossroads, prepared for Join Task Force One and published in 1947:

A number of Army Air Forces officials believe that the drone-plane program undertaken for Crossroads advanced the science of drone-plane operations by a year or more. To be sure, a fewwar-weary B-17’s had been flown without crews during the latter part of the recent war [Operation Aphrodite], but they and their cargoes of explosives were deliberately crash-landed. Also, a few B-17’s had been landed by remote control; but pilots were aboard, ready to take over control in case of trouble. Operation Crossroads was the first operation in which take-off, flight, and landing were accomplished with no one aboard. The feat was an impressive one; many experts had thought it could never be accomplished with planes of this size.

As this video clip shows (start at 6.01), take-off was under the control of a ‘ground beep pilot’, who then handed over to a ‘beep television control pilot’ in an accompanying director aircraft (‘the mother ship’), who handed back to the ground beep pilot for the landing.  This parallels today’s ‘remote-split operations’, though on a greatly reduced spatial scale, where a Launch and Recovery crew stationed in or near the combat zone is responsible for take-off and landing while the mission is flown by a ground control crew in the continental United States):

The B-17 drones operated in concert with the US Navy’s F6F-5 Hellcat drones which made transits of the cloud at 20,000 feet, 15,000 feet and 10,000 feet (see the first image below; the tail fins are painted different colours to indicate different control frequencies: more here).  The second image shows a pilot on the deck of the aircraft carrier Shangri-La controlling an F6F-5 before take-0ff; landing on the deck of a carrier was difficult enough at the best of times and with a skilled crew on board, and not surprisingly the Navy drones returned to Roi island, part of Kwajalein Atoll. 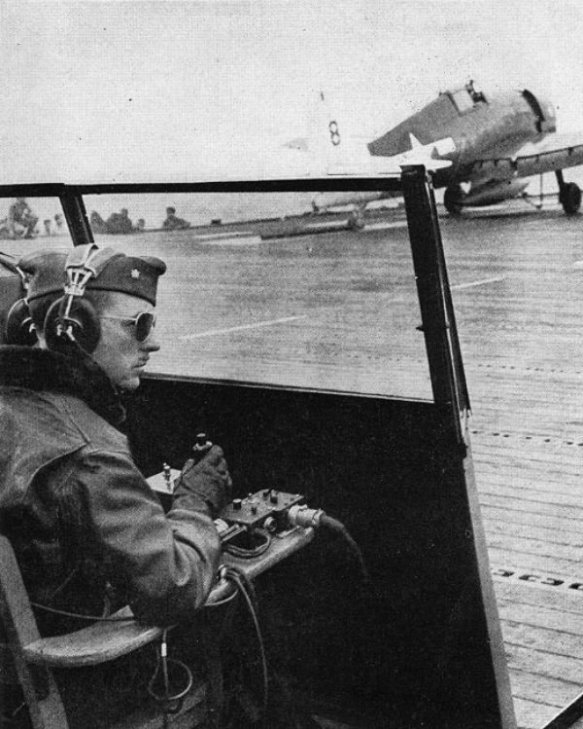 No manned aircraft flew over the center of the blast, called Zeropoint, until four hours later, although manned boats were on the scene after two hours.  Drones were also flown after the second test, Baker, on July 25, which was an underwater shot suspended from a target ship in Bikini’s lagoon. 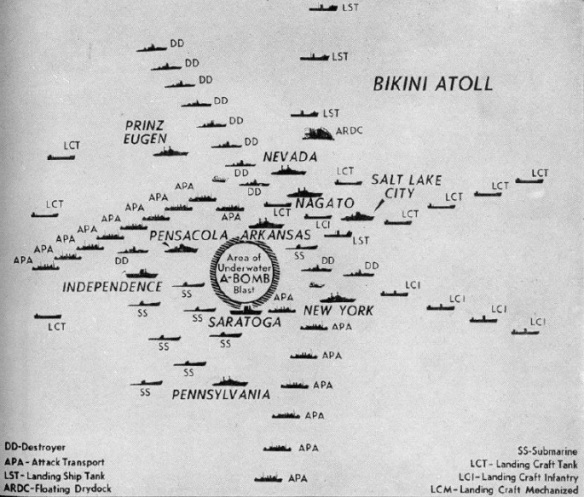 In each case the drones were tasked to take air samples from the cloud (using filters housed in boxes under the wings) and to photograph the cloud formation:

As the official pictorial record boasted (its very existence underlining the importance of a controlled ‘publicness’ to these tests):

Drone planes penetrated where no man could have ventured, flew through the mushroom cloud on photographic missions, sampled its poisonous content, televised to remote onlookers their instrument panel readings for flight analysis.

The samples were crucial, and drones remained of vital importance in collecting them.  The image below shows the air filters being removed from a remotely operated B-17 used in Operation Sandstone (a series of nuclear tests conducted by the Atomic Energy Commission at Eniwetok Atoll in 1948): 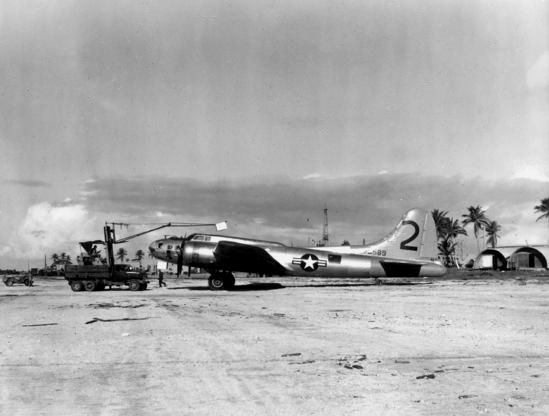 The capstone attempt to deliver atomic bombs by remote controlled aircraft, Project Brass Ring, was abandoned in March 1951 when the Air Force determined that a manned aircraft could execute the bomb delivery safely (at least for those on board), but drones continued to be used during atomic tests.  In 1953 QF-80 drones were in use at Indian Springs, the Air Force portal to the Nevada Proving Grounds (the full story is here):

This was the first time ‘jet drones’ had been used during continental tests.  NULLO (‘No Live Operator Onboard’) operations used the same system of hand offs between beep pilots and director aircraft that had been used for the B-17s, but Sperry claimed that its precision marked a new milestone in remote operations.  Here’s a video of the drones in operation – and the effects of the blast on the aircraft:

But some tests were designed to evaluate the effects of the blast and the cloud on living creatures.  Here is a clipping from the Chicago Tribune, reporting on a test carried out over Nevada on 6 April 1953 – in fact the mission shown in the last still photograph above.  Note that the radiation effects were expected to be so powerful that all air traffic was excluded from an area of 100,00 square miles:

Today Indian Springs is known as Creech Air Force Base: the operating hub for the US Air Force’s MQ-1 Predators and MQ-9 Reapers…