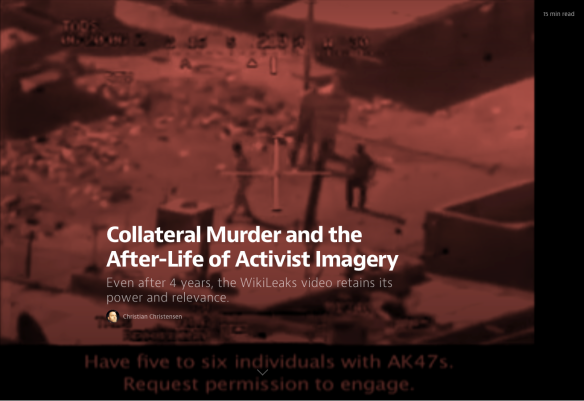 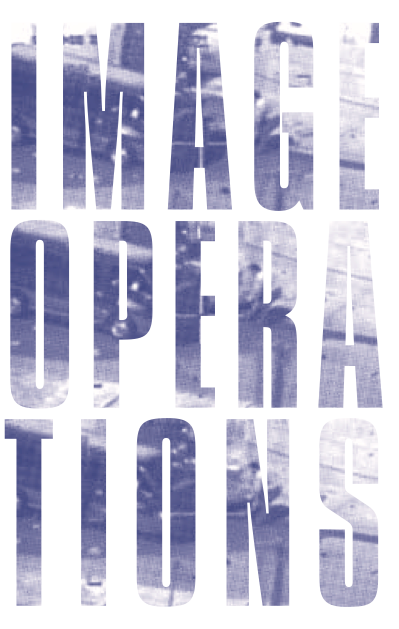 I don’t imagine that anyone who has seen it will ever forget the cockpit video of US Apache attack helicopters mowing down two Reuters journalists and ten other civilians in Baghdad in July 2007.  It was part of the cache that the principled and courageous Bradley Manning gave to Wikileaks, which released the full, unedited clip as Collateral Murder in 2010, and earlier this month Manning’s lawyers opened their defence with a showing of the same video.

The transcript of the video is here, and a redacted copy of the US Army’s investigation report (with annotated video stills) is here.

The incident has been the subject of two short documentary films, linked by a common figure, Ethan McCord, a US soldier who arrived at the scene minutes after the shooting began (more here).

The first is Shuchen Tan‘s Permission to engage, which won the Prix Europa for the best European TV investigation in 2012.  Here’s the trailer:

And here is the full (brilliant) film: 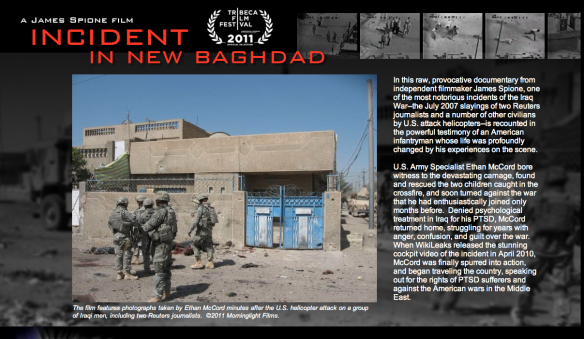 This is how Spione introduces his film:

Psychologists call it “psychic numbing.” Tell someone that tens of thousands of civilians have been killed in the Iraq conflict, or that thousands of U.S. veterans of our Mideast wars suffer from crippling PTSD, and their eyes will likely glaze over. Most people simply cannot comprehend the meaning of such vast numbers, nor are they likely to show any particular concern. Conversely, however, the tale of a single tragic incident can create great empathy in the same person–and greater understanding of the wider effects of war.

On April 5th, 2010, the controversial website WikiLeaks released a grainy black-and-white video that stunned the world. Recorded from the gunsight camera of an U.S. Army attack
helicopter during one of the most chaotic and deadly periods of the Iraq War, the footage depicts the violent deaths of two Iraqi journalists, Namir Noor-Eldeen and Saeed Chmagh,
along with at least eight other mostly unarmed individuals on the streets of Baghdad in July 2007. Minutes later on the video, when the driver of a passing van attempts to come to the aid of the mortally wounded Chmagh, a second helicopter attack occurs that destroys the van and kills several more people, wounding two small children in the process…

My short film INCIDENT IN NEW BAGHDAD examines what happened that day from the first-hand perspective of an American infantryman whose life was profoundly changed by his experiences on the scene. U.S. Army Specialist Ethan McCord bore witness to the devastating carnage, found and rescued the two children caught in the crossfire, and soon turned against the war that he had enthusiastically joined only months before. Denied psychological treatment in Iraq for his PTSD, McCord returned home, struggling for years with anger, confusion, and guilt over the war. When Wikileaks released the video of the incident, McCord was finally spurred into action, and began traveling the country, speaking out for the rights of PTSD sufferers and against the American wars in the Middle East.

However, there is so much more to the story, and I am now developing a more in-depth, feature-length examination of this incident that will include the perspectives of many more people involved in this incident: the infantry on the ground; the families of both Noor-Eldeen and Chmagh; the children, whose father was killed in front of them in the van, as well as their mother; and if possible, the 1-8 Cavalry Airborne gunner who pulled the trigger. My hope is that, by hearing from all of the first-hand participants of this tragic event, we may come to better understand the profoundly damaging consequences that ripple out through the lives of survivors over many years from just one so-called “engagement” in a war. And when we learn from all involved that this incident was not an aberration, but a commonplace occurrence over the course of many years, perhaps then we will start to understand those mind-numbing statistics, and feel the true moral scale of the damage, the wounds, the folly of a war of choice that never needed to happen.

I rehearse all this now for two reasons other than the shadow of sentencing that now hangs over Manning (though that is reason enough) .

First, the video at the dark heart of this incident – and these films – was not captured by a Predator or Reaper thousands of feet in the air and fed back to pilots, screeners and commanders thousands of miles away in the continental United States: this was close-in and immediate, and this raises important questions about scopic regimes and military violence that spiral far beyond the usual (and I think narrowly framed) debate over drones.

Second, Incident in New Baghdad was part-financed by Carol Grayson, who became one of the film’s executive producers.  She is clearly a remarkable woman in all sorts of ways, not least because she has spent much (I suspect most) of her time since then working on a new documentary film project, The Approximate Target that charts ‘the human cost of remote control killing, the dangers of covert government policy and unaccountability in modern warfare.’  It’s been a long, difficult and continuing journey with seemingly no end of obstacles and obstructions: you can read more on her blog here.

From what I’ve been able to discover – which is not as much as I’d like – the focus of the The Approximate Target appears to be on CIA-directed strikes in Waziristan.  But Carol’s most recent posting (today) includes a letter from a Yemeni civilian to President Obama and Yemen’s President Hamadi on the eve of their meeting at the White House.  The letter was released today by Reprieve.  In it, Faisal bin Ali Jabera,  young engineer who lost two of his relatives in a drone strike on Hadhramout last summer, writes:

Our family are not your enemy. In fact, the people you killed had strongly and publicly opposed al-Qa’ida. Salem was an imam. The Friday before his death, he gave a guest sermon in the Khashamir mosque denouncing al-Qa’ida’s hateful ideology. It was not the first of these sermons, but regrettably, it was his last…

Our town was no battlefield. We had no warning – our local police were never asked to make any arrest. My young cousin Waleed was a policeman, before the strike cut short his life…

Your silence in the face of these injustices only makes matters worse. If the strike was a mistake, the family – like all wrongly bereaved families of this secret air war – deserve a formal apology. To this day I wish no vengeance against the United States or Yemeni governments. But not everyone in Yemen feels the same. Every dead innocent swells the ranks of those you are fighting.