I spent part of the week-end at UBC’s Museum of Anthropology, which is currently hosting Safar/Voyage: contemporary works by Arab, Iranian and Turkish artists (until 15 September).  I’d written an essay for the accompanying catalogue – “Middle of What?  East of Where?”, which you can find under the DOWNLOADS tab – and I was at MOA on Saturday afternoon for a lively and appropriately wide-ranging public conversation (billed as a”Global Dialogue”) on “Nomadic aesthetics and the importance of place” with Jian Ghomeshi, artist Jayce Salloum and curator Jill Baird. 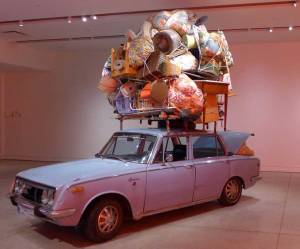 While I was at MOA I spent some time with the artworks on display and in the company of a brilliant app that provides all sorts of information and context; for such a compact exhibition they are thrillingly diverse, speaking to one another in a multiplicity of ways, and disrupting common stereotypes of the region as somehow homogeneous.  Two exhibits are likely to be of particular interest to readers of this blog.  The first, artfully parked outside the second, is Lebanese artist Ayman Baalbaki‘s Destination X (originally 2010, but recreated for MOA in 2013):

Destination X is an old car piled high with the hastily gathered belongings of a refugee family: luggage, everyday objects, and colourful cloth bundles tied to the roof. During the Lebanese civil war these floral fabrics, regional and postcolonial at the same time, replaced fabrics embroidered with local peasant motifs, mirroring the lost agricultural “paradise.” The overloaded car suggests movement and absence, urgency and wandering. The letter X symbolizes forced flight into exile to places unknown. Distance is swallowed in an aimless journey, when time and duration become vague. The journey and its hardships, the risk of leaving home, the difficulty of resettling.

You can find images of earlier versions here, where the artist explains that, while the work had its origins in the Lebanese civil war, it speaks to many other situations and peoples: “Other nationalities can sympathise…Many of the elder generations, it echoes with them…either from Bosnia or from World War II.” 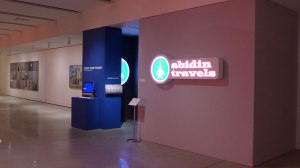 The second is Adel Abidin‘s mixed-media installation, Abidin’s Travels (2006), set up as a travel agent’s office, complete with posters, brochures and video, and its nemesis (a website: how many travel agents are there these days?)

I came up with the idea when I visited Iraq in 2004 and was greeted at a checkpoint by an American soldier, who said, “Welcome to Baghdad!” I realized I was being welcomed by an occupier of my own city. This experience made me think about cities in war and their messy transformations.

After the occupation and gentrification of a city in a conflict zone, you would need a guide, even if you grew up there. This is what I saw happening in Baghdad. So I created a travel agency, using “holiday travel” as a point of departure and Iraq as a destination, to explore the idea of tourism and consumerism in general, and how these generic models break down when applied to a country ripped apart by war. I created this work to draw attention to the new Iraq, “the democratic Iraq,” a mythical place where, in reality, possibility and opportunity barely exist.

You can find a short, interesting commentary by Laura Marks here.

Baghdad has obviously changed in the last six or seven years, but in case you think tourism has been ‘normalised’ check out Wikitravel‘s current guide, which reads as though it was written by the artist (“The easiest way to stay safe in Baghdad is not to go there in the first place”).  Still more revealing, look at the hotel reviews (yes) on Trip Advisor here.  Like all reviews on the site, they tell you as much about the reviewer as they do the place – I was particularly taken by this review of one hotel, which was never far from the headlines during the invasion and occupation, and which displays what I hope is a rare sensitivity to the lot of ordinary people in Baghdad:

The problems start with the lack of amenities. The pool wasn’t fit to swim in, the hotel doesn’t have a bar, there isn’t a gym, nothing. The service was appalling. The food was always cold & generally dreadful, the bathrooms are fitted out with full bottles of head and shoulders, Colgate, dove soap, bic razors and gilette shaving foam. There is no room service, no laundry service and all that for $300 a night….One plus. It’s safe, which is saying something for Baghdad…

Not much global dialogue there then.