I ended my lecture at the Drone Imaginaries conference in Odense this week by arguing that the image of the drone’s all-seeing ‘eye in the sky’ had eclipsed multiple other modalities of later modern war:

Simply put, drones are about more than targeted killing (that’s important, of course, but remember that in Afghanistan and elsewhere ‘night raids’ by US Special Forces on the ground have been immensely important in executing supposedly ‘kill or capture’ missions); and at crucial moments in the war in Afghanistan 90 per cent of air strikes have been carried out by conventional aircraft (though intelligence, surveillance and reconnaissance from remote platforms often mediated those strikes).

To sharpen the point I showed this image from a drone over Afghanistan on 15 April 2017: 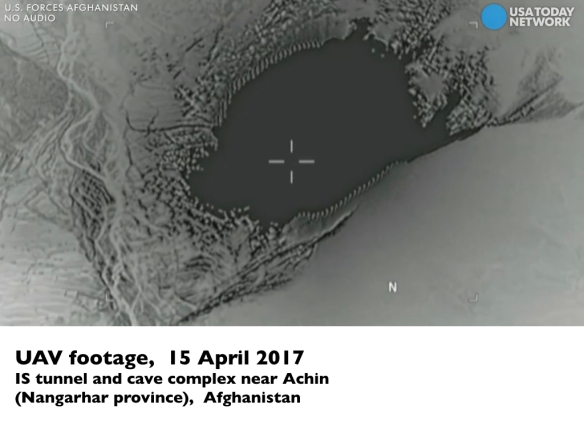 This showed the detonation of the GBU-43/B Massive Ordnance Air Blast (MOAB or ‘Mother Of All Bombs’): 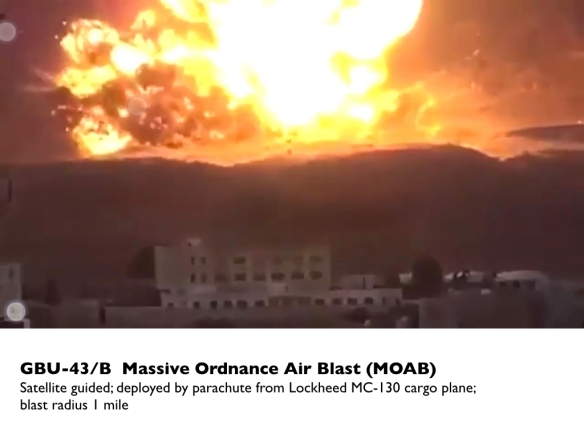 This is a far cry from the individuation of later modern war, the US Air Force’s boast that it could put ‘warheads on foreheads’, and that often repeated line from Grégoire Chamayou about ‘the body becoming the battlefield’.

And, as I’ve been trying to show in my series of posts on siege warfare in Syria, there are still other, shockingly violent and intrinsically collective modalities of later modern war.  Drones have been used there too, but in the case of the Russian and Syrian Arab Air Forces targeting has more often than not avoided precision weapons in favour of saturation bombing and artillery strikes (see here).

All this means that I was pleased to receive a note from the brilliant Bureau of Investigative Journalism about the widening of its work on drones (which will continue, to be sure):

Under President Donald Trump the US counterterrorism campaign is shifting into another phase, and the Bureau is today launching a new project to investigate it – Shadow Wars.  The new phase is in some ways a continuation and evolution of trends seen under Obama. The same reluctance to deploy American troops applies, as does the impetus to respond militarily to radical groups around the world. But as extremist groups spread and metastasise, the US’s military engagements are becoming ever more widespread, and complicated. Peter Singer, a senior Fellow at the New America Foundation, who is a leading expert on security, says: “Shadow wars have been going on for a long time, but what’s clearly happened is that they’ve been accelerated, and the mechanisms for oversight and public notification have been peeled back. The trend lines were there before, but the Trump team are just putting them on steroids.”

A new US drone base has been built in Niger, but its ultimate purpose is unclear. In Afghanistan, the US is trying to prevail over the Taliban, without committing to a substantial increase in troop numbers, by waging an increasingly secretive air war. In Yemen, the US is leaning on the United Arab Emirates as its on the ground counterterrorism partner, a country with a troubled human rights record. Meanwhile, proxy confrontations with Iran are threading themselves into the mix.

Our Shadow Wars project will widen the focus of the Bureau’s drone warfare work. Over the next year, we will bring new and important aspects of US military strategy to light, of which drones are just one troubling aspect.

We aim to explore issues such as America’s increasing reliance on regional allies, the globalisation of the private military industry, the blurring of lines between combat and support missions and the way corruption fuels a state of permanent conflict. As with our work on drones, our primary concern in this new project is to publicise the effects these evolving practices of war have on the civilians on the ground.

In Reach from the Sky, my Tanner Lectures which I’m presently preparing for publication, I sketched what I called a ‘moral economy of bombing’: 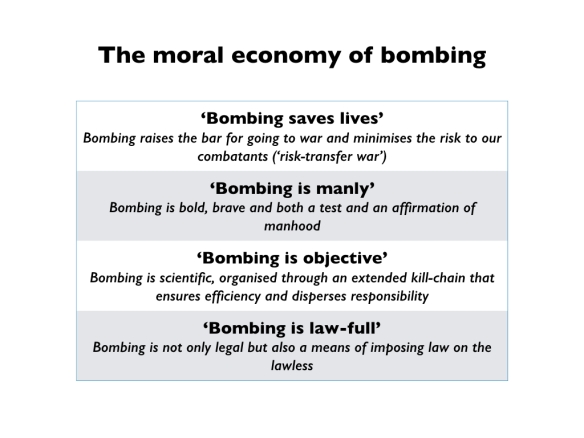 It’s the last of these claims that concerns me here: bombing represented as ‘law-full’.  In the lectures I discussed the legal armature of aerial violence – referring to the combined bomber offensive against Germany in the Second World War Air Chief Marshall Arthur Harris famously insisted that ‘In this matter of the use of aircraft in war there is, it so happens, no international law at all’, a claim that was, I suppose, literally true in so far as it applied to the specific application of air power; I tried to show what has (and has not) changed since then, not least through the development of international humanitarian law and the juridification of later modern war – and the insistence that air power is an effective means of imposing a legal order on the nominally ‘lawless’ (a claim registered through colonial ‘air policing’ and continued in the US and Pakistan air strikes on the Federally Administered Tribal Areas of Pakistan: see ‘Dirty Dancing’ (DOWNLOADS tab). 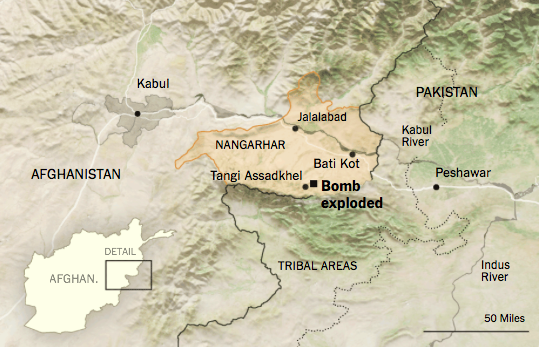 In the ghastly light of the Trump administration’s decision last month to drop (for the first time in combat) what the US Air Force calls ‘the Mother Of All Bombs‘ (MOAB), the GBU-43/B,  on an IS ‘tunnel complex’ in eastern Afghanistan, Michael Weinman has written an excellent essay for Public Seminar on ‘Ordnance as ordinance‘ that elaborates the second part of my claim about bombing being ‘law-full’:

[B]oth the decision to name this weapon MOAB and the decision to deploy it in Afghanistan is tightly linked with what Judith Butler called a “new military convention” begun by Colin Powell when he described the deployment of “smart bombs” during the first Iraq War as “the delivery of ordnance.” In “Contingent Foundations,” Butler noted that Powell “figures an act of violence as an act of law” by substituting “ordnance” (munitions, agents of destructive violence) for “ordinance” (a law or decree). Powell’s speech act, apparently delivered in an unscripted moment during a press conference in January 1991, is an important instance of the “illocutionary force” of language that Butler explores throughout the work she did in the late 1990s and early 2000s — her most impressive and important work in my view. This aerial bombardment of Iraqi installations with technologically advanced munitions, viewable in real time on network and cable TV for the first time, was itself a phenomenon. But it was the declaration that such a display in itself was an act of law enforcement that truly brought us into a new era. An era in which, thanks to Powell and the Bush (41) administration, the alignment of violence and law against a regime that violates international law figures state violence, even where it might be in contradiction of international agreements, as the very agent of law and legitimation. Watching the media response to the recent deployment of MOAB in Afghanistan, it is clear we still haven’t learned Butler’s lesson.

The deeper resonance of reading this particular ordnance as a form of ordinance requires that we attend to a different resonance of its chosen acronym, MOAB. Not the “Mother of All Bombs” nomenclature, which bespeaks its terrifying awesomeness — in the literal sense of the term “awesome,” connoting utter sublimity. That is part of the story too, but it is not the heart of it. Rather, continuing Butler’s pursuit of the line of thought by which Saddam (Hussein) was recast as (the Biblical) Sodom,[1] we must turn instead to the Biblical Moab, patriarch of the Moabites. Crucially, we must bear in mind that, within the Hebrew Bible, this people, whose lands lay across the Dead Sea, is cast as a hostile neighboring people — indeed, the Moabites are depicted as the neighboring tribe most inherently in conflict with the people of Israel. Viewed in this light, there is continuing power in Powell’s fantasy that the deliverance of ordnance is the way “we” publicly declare the ordinance that those who defy international law will be vanquished by the synthesis of law and force executed by the United States military as the leader the coalition of the willing. This vision remains the reigning principle behind the self-image of the United States as an actor on the international scene. And this is so because, deeply steeped in an “Old Testament morality” (a morality wherein the enemies of the United States are figured as the ancient enemies of the people of Israel), this vision justifies a view of America as the model exemplar of a “Judeo-Christian” civilization. A civilization that is — as it ever was — waging a war, engaging in a “clash of civilizations.” Of course we would name our most deadly non-nuclear weapon “Moab” (or M.O.A.B., if you like): what other name than that of the oldest and deepest “frenemy” of Israel could the United States military have possibly dreamt up? 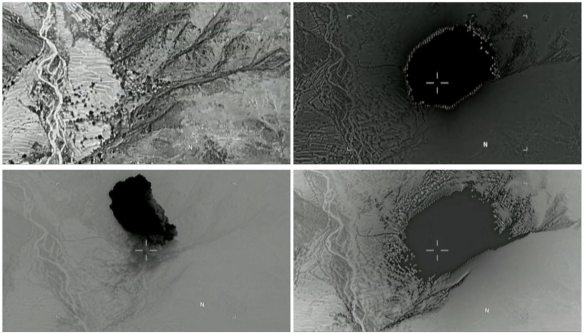 There is more that could be said, I think, especially if one stays with Butler and thinks of this episode as a speech-act.  After all – and repeating a line that was repeated endlessly during the Rolling Thunder campaign against North Vietnam – MOAB was originally developed in 2002 for the ‘Shock and Awe’ campaign that heralded the US-led  invasion of Iraq, and the Pentagon claimed that deploying the MOAB was an act of communication (really): it sent ‘a very clear message’ to IS that it would be ‘annihilated‘.  (The message-in-a-bomb line shouldn’t be confused with the terse messages that ground crews have scrawled on bombs in war after war after war, and I suppose it is less grotesque than the description of bombing Syria as a form of ‘after-dinner entertainment‘ for the US President – which sends an even more terrifying message to anyone with a shred of decency or understanding).

If the bombing in Afghanistan did send a message to IS – and to state actors elsewhere in the world – it also sent a message to innocent others in the vicinity of the blast:

“There is no doubt that Isis are brutal and that they have committed atrocities against our people. But I don’t see why the bomb was dropped,” said the mayor of Achin, Naweed Shinwari. “It terrorised our people. My relatives thought the end of the world had come. Every day fighter jets, helicopters and drones are in the area.”

In that vein, and to return to the colonial genealogy I mentioned at the start, the use of the global South as a laboratory for weapons testing and demonstration has a long history, as Scott Beauchamp‘s report here documents:

…the most interesting commentary probably came from former Afghanistan president Hamid Karzai, who tweeted that “This is not the war on terror but the inhuman and most brutal misuse of our country as a testing grounds for new and dangerous weapons.”

He’s got a point. There is a dark history of Western military powers testing novel weapons and strategies on technologically overmatched non-Western (and non-white) populations. It’s a legacy that mixes the brutal arrogance of colonialism with the technological promise of an easy fix. There are of course numerous examples of this cruel dynamic at play in the centuries leading up to the 20th — conquistadors with dogs and swords, gunpowder in general — but the disparity that currently exists between the material advantages of Western countries and the technological capability of enemies abroad continues to be exploited in ways that conform to a recognizable pattern.

PS Much as I’ve enjoyed Michael’s essay, I think Stephen Fry also had a point.