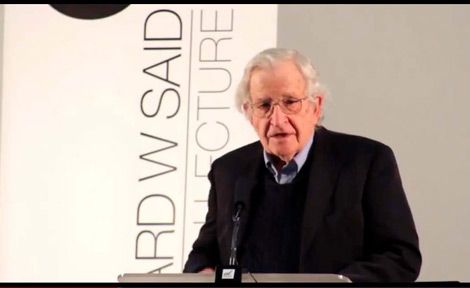 Edward Said died ten years ago in September, and earlier this month Noam Chomsky delivered the 2013 Edward Said Memorial Lecture in London: Violence and dignity: reflections on the Middle East.  The text that formed the basis for the lecture is here, and you can watch a video of the lecture here with introductions by Omar Al Qattan and Mariam Said.

It’s a wide-ranging lecture, but Chomsky returns again and again to the plight of the people of Gaza – and to the disgraceful actions of all those (inside Israel and out) who would rob them of their dignity, their independence and even their life.

Throughout these years Gaza has been a showcase for violence of every imaginable kind. The record includes such sadistic and carefully planned atrocities as Operation Cast Lead — “infanticide,” as it was called by the remarkable Norwegian physician Mads Gilbert who worked tirelessly at Gaza’s al-Shifa hospital with his dedicated Palestinian and Norwegian colleagues right through the criminal assault — a fair term, considering the hundreds of children massacred. And from there the violence ranges through just about every kind of cruelty that humans have used their higher mental faculties to devise, up to the pain of exile that Edward Said wrote about so eloquently. This is particularly stark in Gaza, where older people can still look across the border towards the homes a few miles away from which they were driven — or could if they were able to approach the border without being killed. One form of punishment has been to close off the Gaza side of the border area, including almost half the arable land, according to the leading academic scholar of Gaza, Harvard’s Sara Roy.

While a showcase for the human capacity for violence, Gaza is also an inspiring exemplar of the demand for dignity. The first phrase one hears in Gaza when asking about personal aspirations is for a life of dignity. The distinguished human rights lawyer Raji Sourani writes from his Gaza home that “What has to be kept in mind is that the occupation and the absolute closure is an ongoing attack on the human dignity of the people in Gaza in particular and all Palestinians generally. It is systematic degradation, humiliation, isolation and fragmentation of the Palestinian people.” While the bombs were once again raining down on defenseless civilians in Gaza last November he repeated that “We demand justice and accountability. We dream of a normal life, in freedom and dignity.” 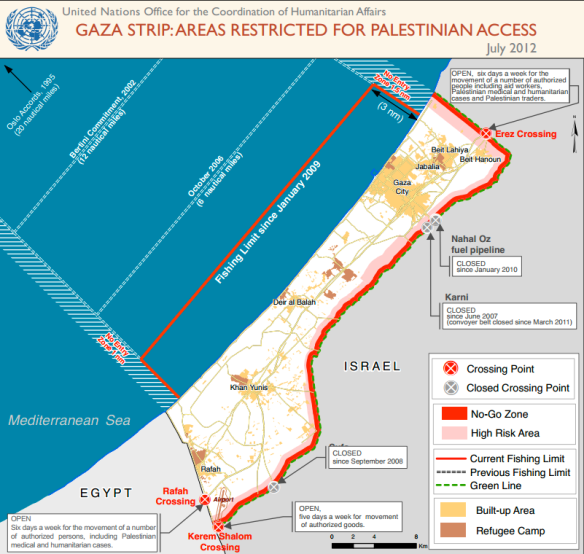 Last fall the brilliant Sara Roy gave another Said Memorial Lecture, this time at the Palestine Center in Washington DC, A deliberate cruelty: rendering Gaza unviable.  She spoke of Edward’s commitment to Gaza and its people:

Edward and I would always speak about Gaza, in fact every time we met. He felt a profound connection to the place and to the people that seemed to be a permanent part of him. Edward had great compassion and great respect for Gaza’s people. He embraced their suffering and took pride in their courage, in the dignified way they continued to move forward. Yet he feared one thing perhaps most of all: the separation and isolation that now engulfs Gaza and threatens, if it hasn’t already, to sever the Palestinians there from Palestinians elsewhere, forcing them, in the words of Hannah Arendt, to “live outside the common world,” deprived of profession and of citizenship, “without a deed by which to identify or specify [themselves].”

Edward raged against the division of his people and against the kind of loss that such division could bring: disunity, abandonment, irrelevance. In The Origins of Totalitarianism, Arendt argues that the fundamental deprivation of human rights is expressed first and most powerfully in “the deprivation of a place in the world which makes opinions significant and actions effective. Something much more fundamental than freedom and justice… is at stake when belonging to the community into which one is born is no longer a matter of course and not belonging no longer a matter of choice…” “This extremity and nothing else,” she writes, “is the situation of people deprived of human rights. They are deprived not of the right to freedom but of the right to action.” “Over the last 45 years Gaza’s trajectory has been striking; from a territory economically integrated into, and deeply dependent upon, Israel and deeply tied to the West Bank, to an area largely marginalized from Israel and the West Bank, an isolated (and disposable) enclave – subject to consistent military attacks – with which Israel and the West Bank have fewer formal economic or political ties than they once did. And from a captive economy restricted to fluctuating levels of growth (at best) but still possessed of the capacity to produce and innovate (within limitations), to an economy increasingly deprived of that capacity, characterized by unprecedented levels of unemployment and impoverishment, with three-quarters of its population needing humanitarian assistance. These damaging transformations among others I shall discuss are becoming increasingly institutionalized and permanent, shaping a future that is both partial and disfigured. What is happening to Gaza is, in my view, catastrophic; it is also deliberate, considered and purposeful.

Her lecture is spell-binding –though I hope that once and for all it breaks the spell of Israel’s ‘withdrawal’ from Gaza.  The map above comes from a UN report, Gaza in 2020: a liveable place? that is summarised here, and the text and a video of Sara’s lecture are available here and here.  The text will form part of Sara’s introduction to a new edition of The Gaza Strip: the Political Economy of De-development.

Marc Ellis provides a wonderful summary of and meditation on Sara’s passionately analytical lecture at Mondoweiss here, and you can access Sara’s A Land Diminished: reflections on Gaza’s landscape (2011) here (it also appears as a chapter in an important collection from the Ibrahim Abu-Lughod Institute of International Studies at Birzeit University, Gaza, Palestine: Out of the margins, which is available here). 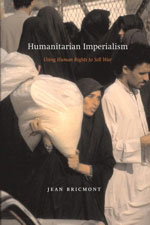 More from my continuing reflections on the humanitarian present: first, a recent interview with Jean Bricmont, the author of Humanitarian Imperialism: using human rights to sell war (Monthly Review Press, 2006) at Counterpunch here.

And if the idea of ‘humanitarian imperialism’ seems to echo Noam Chomsky‘s ‘military humanism’ – remember his The new military humanism: Lessons from Kosovo (Common Courage Press, 2009), and if you do see also his A new generation draws the line: humanitarian intervention and the “responsibility to protect” today (new edition, Paradigm, 2011) – then here is Chomsky on Bricard and ‘the new doctrine of imperial right’. 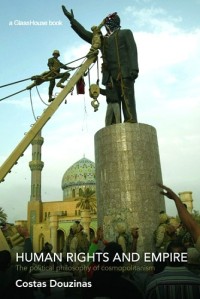 All that said, Bricard’s (and Chomsky’s) vision is considerably narrower than the sense in which Eyal Weizman develops the idea of a ‘humanitarian present‘ that involves the entanglement of military violence, international humanitarian law and NGOs. Here I think some of the sharpest contributions have come from Costas Douzinas, Professor of Law at Birkbeck, University of London.  His relevant essays have appeared all over the place, but the core arguments are assembled in his Human Rights and Empire (Routledge, 2007).

The significance of Douzinas’s project was beautifully captured by Umut Özsu writing in the European journal of international law 19 (2008):

If rights are to retain their emancipatory edge in an age that is increasingly prone to couching its wars of retribution and occupation as necessary evils en route to the attainment of perpetual peace, a considerable measure of vigilance is required to keep them from being subsumed beneath the rubric of the new arsenal of governmental techniques with which the ‘post-9/11’ West has armed itself. After all, what presents itself as a bold acceptance of responsibility may, on closer inspection, prove to be substantially indistinguishable from accommodationist opportunism. Douzinas’ work is invaluable in this regard, laying the groundwork for a form of cosmopolitanism which neither clings unquestioningly to the humanitarian tradition nor permits itself to be captured by the machinery of an ostensibly mature and conscientious pragmatism. 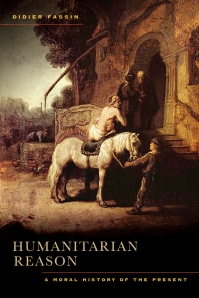 And for a genealogy of humanitarianism it’s hard to better Didier Fassin‘s monumental Humanitarian reason: a moral history of the present (University of California Press, 2011).  Trained successively in medicine, in public health and in social science in Paris, Fassin’s career spans a world of field investigations and social responsibilities, including service as Vice-President of the French National Committee on AIDS and Vice-President of Médecins Sans Frontières.  Fassin co-edited (with Mariella Pandolfi) an indispensable collection of essays, Contemporary states of emergency: the politics of military and humanitarian interventions (Zone, 2010), but Humanitarian reason is his magnum opus (in every sense of the word) – so far, at any rate.

If you don’t know his work, one of the best introductions is Fassin’s lecture on the Critique of Humanitarian Reason on 17 February 2010 at the Institute for Advanced Study at Princeton:

Humanitarianism, which can be defined as the introduction of moral sentiments into human affairs, is a major component of contemporary politics — locally and globally — for the relief of poverty or the management of disasters, in times of peace as well as in times of war. But how different is the world and our understanding of it when we mobilize compassion rather than justice, call for emotions instead of rights, consider inequality in terms of suffering, and violence in terms of trauma? What is gained — and lost — in this translation? In this lecture, Didier Fassin, James D. Wolfensohn Professor in the School of Social Science, attempts to comprehend humanitarian government, to make sense of its expansion, and to assess its ethical and political consequences.

And here he is:

For a detailed, thoughtful and compelling review of Humanitarian Reason see Steven Lukes, ‘The politics of sacred life’, in Public Books (August, 2012) here.  An extract:

The inequalities resulting from humanitarian government are, moreover, at work on the global scale, as evidenced by the contrast between refugees, gathered, protected, and assisted in huge camps in the South, and asylum seekers, subject in the North to decisions “parsimoniously made about which of them may be granted protection under the law.” For this to work the territorial and moral boundaries between the two worlds must be tightly sealed and policed, for example, “preventing refugees from the South from claiming the prerogatives granted to asylum seekers in the North.” As for the latter, if they are admitted, it is on humanitarian grounds rather than as of a right.

However, the heart of Fassin’s critique of humanitarian reason lies, not in the exposure of the disjunction between fantasy and harsh realities, but rather in the analysis of the ways in which humanitarian discourse functions to render this disjunction less visible and less troubling than it might otherwise be, thereby inhibiting possible effective practical and political interventions. Indeed, there is the suggestion here that moral discourse itself may serve to displace a more adequate understanding, deflecting attention from the deeper and wider sources of misery and suffering, thus rendering action to reduce them less feasible.

We need, Fassin writes, “to understand how this language has become established today as the most likely to generate support among listeners or readers, and to explain why people often prefer to speak about suffering and compassion than about interests or justice, legitimizing actions by declaring them to be humanitarian.” The social sciences are themselves part of this story, lending credit to the new political discourse by focusing on exclusion and misfortune, suffering and trauma, providing “the new lexicon of moral sentiments” that “has perceptible effects both in public action and in individual practices.” What, he asks, “ultimately, is gained, and what lost, when we use the terms of suffering to speak of inequality, when we invoke trauma rather than recognizing violence, when we give residence rights to foreigners with health problems but restrict the conditions for political asylum, more generally when we mobilize compassion rather than justice?”