Following my last post on ‘The blue sky of Hiroshima’, I’ve received several e-mails from readers wondering at the size of the blast radius from ‘Little Boy’ (15 kilotons) shown on the image from NUKEMAP; there’s another one below, which shows the blast radius from ‘Fat Man’ (21 kilotons) originally detonated over Nagasaki and here projected on to Vancouver (for a critical note on these projections, by the way, see my original post). 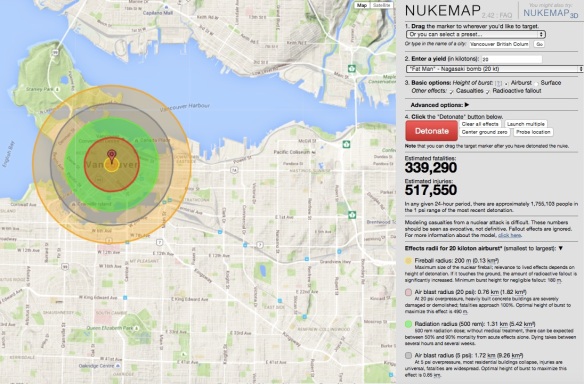 If, like my correspondents, you are surprised at the ‘small’ size of the radii: you are right (though don’t ignore the numbers on the right…). Several years ago Maximilian Bode created this infographic to show the exorbitant increase in the destructive capacity of nuclear weapons since those two bombs were exploded over Japan 70 years ago:

Many of today’s warheads are much smaller – the missiles carried on Trident, for example, are around 100 kilotons.   But that’s small comfort.  If you want to know how many nuclear warheads there are in the world today, this chart from the Nuclear Notebook produced for the Bulletin of Atomic Scientists will give you a rough idea (the interactive version is here): 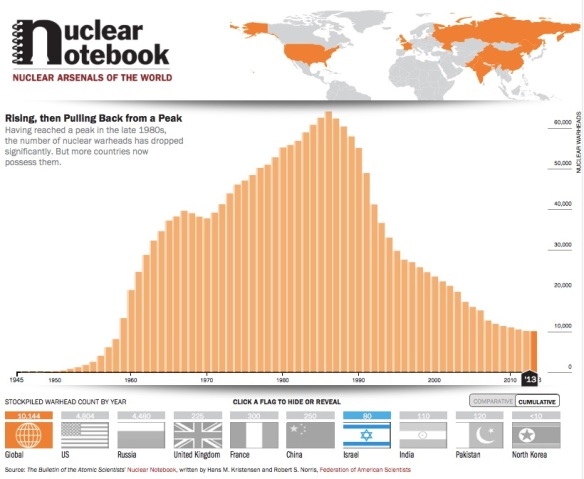 And finally Ehsan Rezaie has produced this video for Orbital Mechanics which plots (‘animates’ doesn’t seem the appropriate verb somehow) every nuclear detonation from 1945 on; you can also access this on Vimeo if the embed doesn’t work: search for ‘Trinity’: