I’ve been urging for some time now that the debate over drone strikes must not neglect what has been happening in Afghanistan: hence “From a view to a kill” (DOWNLOADS tab) and the much longer version to appear in The everywhere war.  According to a report on the Guardian website posted late on Tuesday by the resourceful Spencer Ackerman, ex-Danger Room (now sadly itself an ex-site), ‘A study conducted by a US military adviser has found that drone strikes in Afghanistan during a year of the protracted conflict caused 10 times more civilian casualties than strikes by manned fighter aircraft.’  The period under analysis (from mid-2010 to mid-2011) followed a series of measures announced by General Stanley McChrystal to reduce civilian casualties from air operations, and coincided with a dramatic increase in the number of drone strikes (which continued to increase through 2012).

The study in question was carried out by Larry Lewis for the Joint Coalition and Operational Analysis (JCOA), a division of the Joint Staff J7 whose work is summarised in the following slide (which comes not from Edward Snowden‘s cache but from here): 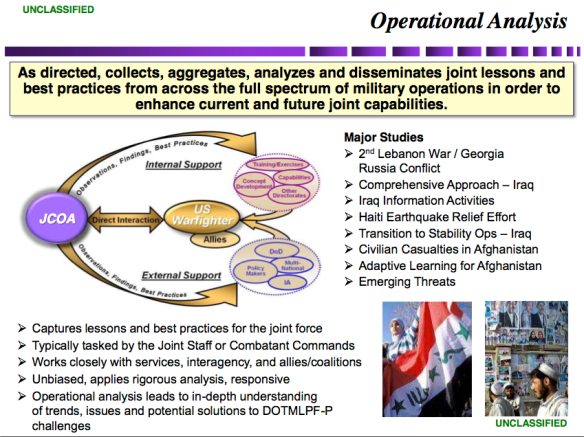 Notice ‘Civilian casualties in Afghanistan’ is #6 on the list of major studies.  The completed study is called Drone Strikes: Civilian Casualty Considerations and, apart from the Executive Summary that was published on 18 June, remains classified.  The opening paragraph is the primary source for Spencer’s story, and here it is:

The key sentence is in bold, and a version of it reappears in an essay, ‘Changing of the Guard: civilian protection for an evolving military’, that Lewis wrote with Sarah Holewinski, Executive Director of the Center for Civilians in Conflict and which appears in the latest issue of PRISM 4 (2) (2013), a journal of the Center for Complex Operations at the National Defense University (the press release from Civilians in Conflict is here).  The authors’ central concern is that ‘as Washington shifts its focus from counter-insurgency to counterterrorism, and from large-scale ground operations to more discrete and oftentimes-unmanned operations, the progress U.S. forces have made on preventing and mitigating civilian harm may soon be lost.’

They consider the risks attendant upon the increased reliance on Special Operations Forces – something that readers of Jeremy Scahill‘s Dirty Wars will need no warning of –  but also those that are likely to flow from an increased use of Unmanned Aerial Systems (UAS):

‘America’s use of force will increasing rely on new technologies, including air force capabilities to penetrate enemy defenses and strike over long distances. Unmanned Aerial Systems, sometimes referred to as “drones,” saw major use in Iraq and Afghanistan, and are slated for a big leap in funding. The Pentagon called for a nearly one-third increase in its fleet in the years ahead.

‘The use of UAS can have military advantages for avoiding civilian casualties in armed conflict, if used with that intent in mind. Their systems feature precision weapons, their sensors have increasingly high-resolution imagery to assess the ground situation, and back in the control room, trained imagery analysts scrutinize a target area prior to engaging, which isn’t always possible in a full ground operation.’

They list a series of familiar objections to the use of these remote platforms in areas outside ‘traditional combat theaters’, but they are also critical of  claims about their forensic capacity inside war-zones:

‘The assumption that UAS strikes are surgical in nature is … belied by research on recent combat operations in Afghanistan. There, UAS operations were statistically more likely to cause civilian casualties than were operations conducted by manned air platforms. One reason was limited training for UAS operators and analysts in how to minimize civilian harm. adding or improving training on civilian casualty prevention is a resource decision in direct tension with the increasing demand for more uaS and more operations, since additional training on civilian protection means time must be taken from somewhere else including the mission itself.’

They don’t say much about the reasons for this, except that they then criticise the ‘clandestine use of UAS by the US government’ because it raises ‘significant concerns that civilian casualties will not be properly monitored or investigated and thus called into question’ and then, several paragraphs later, they note that non-covert operations in Afghanistan ‘are replete with examples where all the engaged individuals were believed to be combatants, but a later investigation found many or all were civilians misidentified as combatants.’ 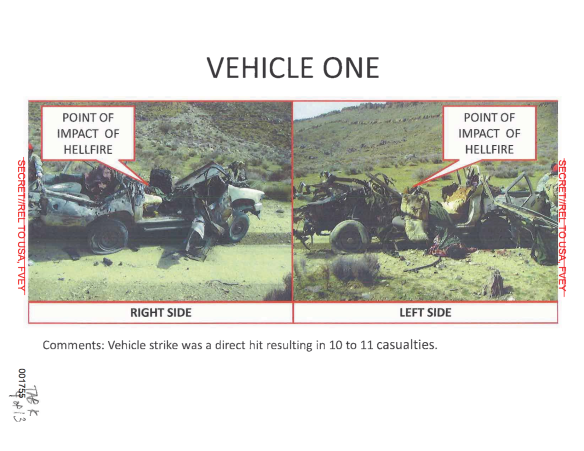 A key issue, then appears to be misidentification, and in my examination of one hideous incident in Uruzgan province in Afghanistan in February 2010 (in “From a view to a kill”; see also the image above) – an analysis I develop in my more detail in The everywhere war – I suggested that the high-resolution video feeds from these remote platforms engender an intimacy with ground troops that belies the physical remoteness of the drone operators.  They routinely claim to be not 7,500 miles from the battlespace but just 18 inches – the distance from eye to screen – and this immersive capacity (which these feeds do indeed share with videogames) predisposes them to view virtually every proximate Afghan action as hostile:

‘… the greater incidence of civilian casualties when close air support is provided to ‘troops in contact’ may result not only from time-critical targeting and its correspondingly ‘fewer checks to determine if there is a civilian presence’ … but also from the persistent presence of the [UAS] and its video feeds immersing its remote operators in, and to some substantial degree rendering them responsible for the evolving situation on the ground. This predicament, in which proximity not distance becomes the problem, cannot be resolved by tinkering with the Rules of Engagement; high-resolution imagery is not a uniquely technical capacity but part of a techno-cultural system that renders ‘our’ space familiar even in ‘their’ space – which remains obdurately Other.’

I don’t know if this forms part of the classified report, of course, but in an earlier report, Reducing and mitigating civilian casualties: enduring lessons (dated April 2013) Lewis emphasised the importance of using ‘discrimination tools’ in ‘situations where forces need to discern whether an individual is demonstrating hostile intent’ – but what he seemed to have in mind was another technological fix, ‘higher-resolution imagery or night vision devices’, whereas the root of the problem may well not be the power to see but the capacity to make sense of what is seen.

In any event two other questions remain.

First, during the period under analysis drone strikes accounted for around 5 – 6 per cent of total weapon releases by all aircraft in Afghanistan, but many of the conventional strikes nevertheless relied on persistent surveillance of targets from Predators or Reapers and then attacks by helicopters or fighter-bombers (which was the case in the Uruzgan attack).  Does Lewis’s statistical analysis shed any light on the difference (I assume there is one) between a UAS acting as a ‘hunter-killer’ and a UAS providing only real-time ISR as part of a networked operation?

Second, what is the difference between ‘an incident’ and an ‘engagement’ in the first extract I’ve quoted?  This is a substantive issue of considerable moment: if drone strikes produce a roughly similar number of civilian casualties as conventional strike aircraft ‘per incident’ but ten times the number ‘per engagement’, it’s vital to know the difference. Protagonists of remote operations will undoubtedly seize on the first, critics on the second.

I’m trying to chase down the difference. To be continued…