The Open University has just released online a series of ‘colourised’ photographs from the First World War.  My favourite is shown above: a mobile pigeon-loft so that messages could be carried back to GHQ (more on pigeons and the war effort here and especially here; their military service did not end with the First World War).

These were all originally black and white photographs, but Taschen has recently published a much more extensive collection of original colour (‘autochrome’) photographs – you can view some of the images online here – edited by Peter Walther, The First World War in Colour (384 pp).

In an online announcement the publisher explains:

The devastating events of the First World War were captured in myriad photographs on all sides of the front. Since then, thousands of books of black-and-white photographs of the war have been published as all nations endeavour to comprehend the scale and the carnage of the “greatest catastrophe of the 20th century”. Far less familiar are the rare colour images of the First World War, taken at the time by a small group of photographers pioneering recently developed autochrome technology. 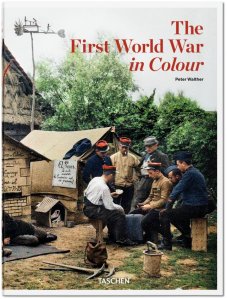 To mark the centenary of the outbreak of war, this groundbreaking volume brings together all of these remarkable, fully hued pictures of the „war to end war“. Assembled from archives in Europe, the United States and Australia, more than 320 colour photos provide unprecedented access to the most important developments of the period – from the mobilization of 1914 to the victory celebrations in Paris, London and New York in 1919. The volume represents the work of each of the major autochrome pioneers of the period, including Paul Castelnau, Fernand Cuville, Jules Gervais-Courtellemont, Léon Gimpel, Hans Hildenbrand, Frank Hurley, Jean-Baptiste Tournassoud and Charles C. Zoller.

Since the autochrome process required a relatively long exposure time, almost all of the photos depict carefully composed scenes, behind the rapid front-line action. We see poignant group portraits, soldiers preparing for battle, cities ravaged by military bombardment – daily human existence and the devastating consequences on the front. A century on, this unprecedented publication brings a startling human reality to one of the most momentous upheavals in history.

And for an altogether different rendering of the First World War – often but not always in colour – I recommend Paul Gough‘s magisterial account of 15 artists (many of whom saw active service,  A terrible beauty: British artists in the First World War.  You can download the first chapter here, sadly without the illustrations: but Paul’s commentary is incisive, and I found his work really helpful in working on ‘Gabriel’s Map’, especially his essays on military sketching which considerably enlarged my sense of the ‘cartographic imaginary’ on the Western Front.  Gerry Corden has a fine account of the book here, and includes many excellent images including the work of my favourite C.W.R. Nevinson.  Finally, Paul’s own website is here: click on Vortex 1 through 5 at the bottom.

Not a pigeon in sight, though.