Three short contributions that have caught my eye raise a series of interesting questions about contemporary ‘security archipelagos’ (in multiple sense of the term, hence the plural). 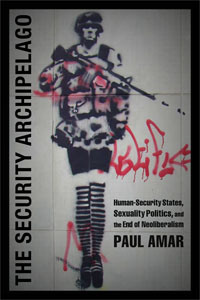 The term itself comes from Paul Amar, and Austin Zeiderman has a short but interesting review of his The Security Archipelago: Human-Security States, Sexuality Politics, and the End of Neoliberalism (Duke, 2013) over at Public Books (Public Culture‘s public site):

‘Amar asserts that we need an analytical framework focused on the rise of human security—a governance regime that “aim[s] to protect, rescue, and secure certain idealized forms of humanity.” This new regime is gradually replacing neoliberalism, Amar contends, “as the hegemonic project of global governance and of state administration.” This shift is evident in how security is now justified and pursued by states. The antagonistic relationship between security and human rights that characterized the “neoliberal market states” of the late 20th century is no longer so evident. The repressive security strategies that underpinned earlier development paradigms have been succeeded by the “promise to reconcile human rights and national security interests” in the interest of economic prosperity. Progressive and conservative security doctrines now agree on the imperative to “humanize” (or “humanitarianize”) both state and parastatal security apparatuses. The result, Amar argues, is what he calls the “human-security state”: a globally emergent governance regime with “consistent character and political profile.” From Latin America to the Middle East, political legitimacy is increasingly based on securing humanity against a range of malicious forces….

If the megacities of the Global South are indeed “laboratories” in which new logics and techniques of global governance are being created, it is up to other researchers to fill out and develop further Amar’s concept of the “security archipelago.” Though his study provides both the theoretical rationale and the analytical tools with which to do so, it may be worth questioning whether the “human” is necessarily central to emerging security regimes. For along with human security apparatuses and the human actors struggling to articulate progressive alternatives, a host of non-humans—drones, border fences, hurricanes—are actively producing the security landscape of the future.’

Secondly, I’ve been thinking about the ways in which the work of these ‘laboratories’ often relies on non-state, which is to say corporate, commercial sites (this isn’t news to Paul, of course, even if he wants to challenge our ideas about neoliberalism).  We surely know that the traditional concept of the military-industrial complex now needs wholesale revision, and I’ve noted before the timely and important essay by Jeremy Crampton, Sue Roberts and Ate Poorthuis on ‘The new political economy of geospatial intelligence‘ in the Annals of the Association of American Geographers 104 (1)  (2014) (to which I plan to return in a later post).  The latest MIT Technology Review has a short but suggestive essay by Antonio Regalado, ‘Spinoffs from Spyland’, which describes some of the pathways through which the National Security Agency commercializes (and thus potentially subcontracts and, in some cases, even subverts) its surveillance technology:

In 2011, the NSA released 200,000 lines of code to the Apache Foundation. When Atlas Venture’s Lynch read about that, he jumped—here was a technology already developed, proven to work on tens of terabytes of data, and with security features sorely needed by heavily regulated health-care and banking customers. When Fuchs’s NSA team got cold feet about leaving, says Lynch, “I said ‘Either you do it, or I’ll find five kids from MIT to do it and they’ll steal your thunder.’”

Eventually, Fuchs and several others left the NSA, and now their company [Sqrrl] is part of a land grab in big data, where several companies, like Splunk, Palantir, and Cloudera, have quickly become worth a billion dollars or more.

Over the summer, when debate broke out over NSA surveillance of Americans and others, Sqrrl tried to keep a low profile. But since then, it has found that its connection to the $10-billion-a-year spy agency is a boost, says Ely Kahn, Sqrrl’s head of business development and a cofounder. “Large companies want enterprise-scale technology. They want the same technology the NSA has,” he says.

And finally, before we rush to radicalise and globalise Foucault’s critique of the Panopticon, it’s worth reading my friend Gaston Gordillo‘s cautionary note – prompted by the search for missing Malaysian Airlines Flight 370 – on ‘The Opaque Planet’:

The fascination with, and fetishization of, technologies of global location and surveillance often makes us forget that, for all their sophistication, we live on a planet riddled with opaque zones that will always erode the power of human-made systems of orientation, for the simple fact that no such system (contrary to what the NSA seems to believe) will ever manage to create an all-seeing God. This opacity is intrinsic to the textured, three-dimensional materiality of the surface of the planet, and is especially marked in the liquid vastness of the ocean. 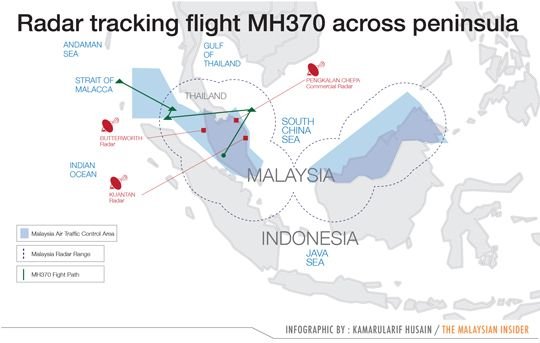 Phil Steinberg has already commented on the geopolitics of the search, but Gaston draws out attention to the gaps in the surveillance capabilities of states, and here too the geopolitical meshes (and sometimes jibes against) the geoeconomic, as described in this report from Reuters:

Analysts say the gaps in Southeast Asia’s air defenses are likely to be mirrored in other parts of the developing world, and may be much greater in areas with considerably lower geopolitical tensions.

“Several nations will be embarrassed by how easy it is to trespass their airspace,” said Air Vice Marshal Michael Harwood, a retired British Royal Air Force pilot and ex-defense attache to Washington DC. “Too many movies and Predator (unmanned military drone) feeds from Afghanistan have suckered people into thinking we know everything and see everything. You get what you pay for. And the world, by and large, does not pay.”