At a wonderful conference earlier this year in Roskilde I heard a stunning presentation about cross-cultural encounters and everyday racism on board Bus 5A in Copenhagen:

‘With more than 65,000 passengers a day, bus 5A is the busiest route in Copenhagen and the Nordic countries. Day and night, the bus cuts through the streets and connects different parts of the city. Bus 5A is iconic and loved, but also hated among bus drivers who have named it ‘the suicidal’ route and in everyday language refer to it as ‘Slamsugeren’ (suction vehicle) because it transports all kinds of people and connects many different places in the city. The bus starts in the suburb (Husum) and connects the multicultural part of Copenhagen (Nørrebro) with the more gentri ed inner city and the outskirts of Copenhagen, ending at the airport.’ 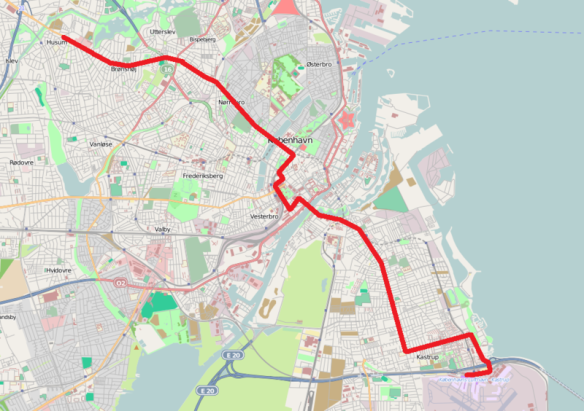 The paper, by Lasse Koefoed, Mathilde Dissing Christensen and Kirsten Simonsen – which has been published in Mobilities (and from where I’ve borrowed these quotations) – describes a series of tactics pursued by passengers (and drivers) on the bus; for example:

‘… the dominant picture of the bus more often involves what we could call ‘the little racism’. A Pakistani immigrant describes this to us with a strong use of body language. He looks askance and moves a bit away from an imagined person next to him, wrinkles up his nose and says,‘Ashh’, in this way performing distanciation. Another respondent confirms this impression by telling: ‘You can feel it on the Danes, in particular when it is crowded’. She has difficulties finding words but talks about discomfort and anger. She is aware that she cannot rule herself out from the feeling:

I can see that I actually do it a bit myself. When a group of young immigrants enters the bus, then I strengthen my hold on my backpack or my bag. (Charlotte, passenger)

She recognises that it must be an unpleasant experience for the young men and feels a bit guilty, but she ‘tries to do it a little discreet[ly]’. What is at stake here is a sensing of an affective space, the more passive side of emotional experience, where emotions such as fear, discomfort, anger and disgust are circulating in the intense atmosphere of the crowded bus. This affective space is also at work as a background when young boys, asked about visions for the future, develop a utopia of a bus without racism.’

It’s a stimulating and provocative read, and it’s been on my mind for months since.  But it’s given a startling immediacy today by the new that Amnesty International has plastered a tank on the side of a Copenhagen bus.  Adweek reports:

The wrap makes a city bus look like a tank prowling the streets. “This is everyday life in Aleppo,” says the headline on the side, referring to the Syrian city devastated by the country’s civil war….

The idea is to remind people that while the Islamic State has left Aleppo [that’s a sentence that requires a good deal of qualification: to attribute the horrors of the siege of Aleppo to IS is not so much shorthand as sleight of hand], the Syrian war continues. The ad is also designed to raise awareness of refugees’ right to security from war and persecution.

“Everyone has the right to safety—also refugees,” says Claus Juul, legal consultant for Amnesty International. “It can be difficult to imagine what it is like to be human in a city, where one daily fears for one’s own and loved ones lives. Therefore, we have brought the everyday life of Aleppo to Copenhagen’s summer cityscape, so we, Danes, have the opportunity to face Syria’s brutal conflict.”

You need to see the short animation here or here to get the effect.

Fortunately the route is the 26 not the 5A…