During the last week or so there have been several attempts to ‘bring Gaza home’ to New York. Chris Walker superimposed a map of Gaza on several major U.S. cities, including New York.  This is more artful than it first appears, since Chris has deliberately sought to show not the usual area for area comparison (the second map below) but rather ‘how much space is taken up by 1.8 million people’: 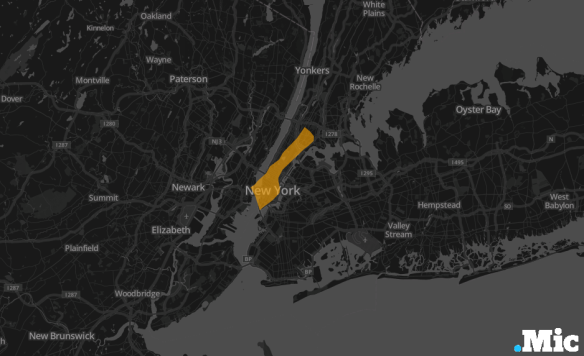 Transposition is a common tactic of popular geopolitics – it’s been widely used in commentaries on the war in Iraq in particular – but I’m in two minds about its political effectiveness.  Others clearly aren’t.  The next image is the Anti-Defamation League’s invitation to empathy (of sorts):

It elicited this response from Daniel Sieradski:

But perhaps the most powerful comparison between New York and Gaza is the latest info graphic from Visualizing Palestine on ‘the five stages of grief’: it’s effective, I think, because it’s original and you have to take your time over it.  And anything that encourages people to take time for Gaza and its people is worth it.

UPDATE: I’ve just had a kind note from Léopold Lambert reminding me of his ‘War in the Manhattan Strip’ that he published on the Funambulist a couple of years ago; I recommend reading the accompanying text….