News from Zoe Wool of a rich and ambitious series of short image-essays she has curated for Public Culture‘s Public Books (‘a curated monthly review devoted to spirited debate about books and the arts’) under the title Soldier exposures and technical publics.  Here’s an excerpt from the introduction: 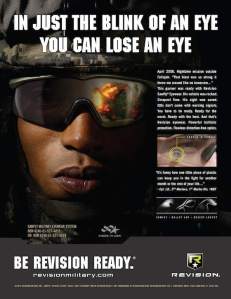 In this collaborative visual essay, edited by Zoë H. Wool, we consider an idiosyncratic assemblage of pictures of American soldiers. These are not iconic images that “speak for themselves” but less conventional ones that suggest both the technical expertise involved in producing and managing war’s violence and the vulnerability of soldiers at the heart of war. In considering these images as technical, we highlight the many forms of war’s material and technical expertise, expertise that is often disarticulated from the social, political, and ethical fields on which war equally relies.

The images range from grainy World War I–era photographs, recovered from cluttered archives, to digitally generated contemporary images that depict the results of war’s embrace of high technology. Their material qualities reflect something of their intended publics: the curled edges of a Vietnam War snapshot tucked away inside a shoebox (Jauregui); the high resolution of an advertisement that speaks to contemporary soldiers’ special knowledge of explosive force and special role as savvy gear consumers (MacLeish); the directed gaze of soldiers whose bodies bear the weight of innovations in prosthetics and weapons systems, both of which technologically extend the body (Serlin, Lawrie, Kaplan); and the precise composition of images used to display soldiers’ special prowess to medical or technical experts or else to cultivate such technical readings in a broader public (Linker, Masco, Wool).

In presenting these images, we take seriously Walter Benjamin’s warning that photographs unmoored from the historical arrangements of life that produce them are politically hazardous capitulations to fashion, “arty journalism” that “cannot grasp a single one of the human connexions in which [they] exist.” And so we inscribe each image with a caption, anchoring it in a world of human connections and gendered and racialized bodies. These captions rearticulate the relationship between technical expertise and ethics, reconnecting the matériel and personnel of war with the social and political worlds they entail.

These captions describe a material history of soldiers’ bodies whose themes recur across time. The unromantic vulnerability of the soldier on which war making depends (Jauregui, MacLeish, Masco); the technological and prosthetic interventions to which soldiers are subject and from which soldierly life itself is inseparable (Lawrie, Masco, MacLeish, Serlin, Wool); the forms of display involved in making soldiers into certain kinds of biopolitical subjects (Lawrie, Linker, Serlin, Wool); the way war remaps geographic and affective terrain (Kaplan, Masco); and the intimate relationship between place and feeling that war also exposes, binding homelands and homefronts to death zones while producing spaces of homosocial or national intimacy (Jauregui, Linker, Masco).

As we address these un-iconic soldier images to the politics of displaying vulnerable bodies, or rendering them resilient, we also incur collateral effects. In maintaining our focus on images of American soldiers, for instance, we contribute to the ignorance of other kinds of war-bound bodies and lives, from civilians to foreign belligerents to kinds of American soldiers—notably women—who are not pictured here. By displaying medical images of men whose names and lives we do not know, we contribute to the disabling history of what poet Eli Clare has called “gawking, gaping, and staring.” We are not innocent of these consequences. In pointing them out we show only how inseparable they are from many ongoing conversations about aesthetics, ethics, and the American warscape.

By focusing on some of the nooks and crannies of the American warscape, rarified spaces of technical expertise, we hope to incite new and shared modes of reading and recognizing martial imagery and new approaches to thinking about how pictures of soldiers are made and made meaningful in some ways and not others at specific material, social, and ethical conjunctures.

The portfolio includes these images and brief commentaries:

— David Serlin: How to Be Yourself in Public

— Zoë H. Wool: This Is a Picture of an Injured Soldier