When I spoke at the symposium on ‘The Intimacies of Remote Warfare’ in Utrecht before Christmas, one of my central arguments was about the slow violence of bombing.  The term is, of course, Rob Nixon‘s, but I borrowed it to emphasise that the violence of sudden death from the air – whether in the air raids of the First and Second World Wars or the drone strikes of the early twenty-first century – neither begins nor ends with the explosion of bombs and missiles.

Paul Saint-Amour speaks of ‘traumatic earliness’: that dreadful sense of deadly anticipation.  The sense of not only preparation – communal and individual – but also of an involuntary tensing.  I described this for the First and Second World Wars in ‘Modern Wars and Dead Cities’, which you can download from the TEACHING tab, but here is A.L. Kennedy who captures it as well as anyone: 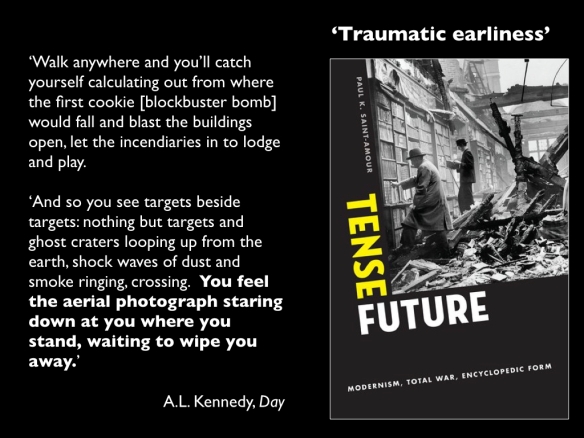 Add to that the blackouts, the new landscape of civil defence with its sandbags and shelters, the new choreography of movement through the war-time city, the air-raid sirens and the probing arcs of the searchlights.

Perhaps this seems remote, but it shouldn’t.  Modern technology can radically heighten that sense of foreboding: calibrate it, give it even sharper definition.  Here is Salam Pax, counting down the hours to US air strikes on Baghdad: 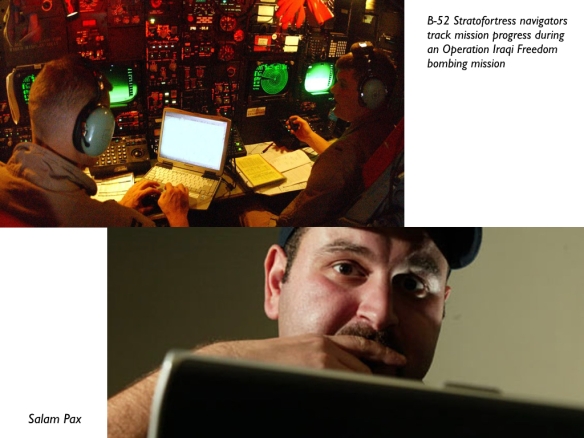 Fast forward to drone strikes.  The sense of dread visited on innocents by multiple US drone programmes is readily overlooked in the emphasis on ‘targeted killing’, on what the US Air Force once called its ability to put ‘warheads on foreheads’, and on the individuation of this modality of later modern war.  ‘The body is the battlefield’, as Grégoire Chamayou argues.

I’ve written about all those things, but there is a powerful sense in which the battle space still exceeds the body: for in order to target the individual these programmes also target the social, as this set of slides from my Utrecht presentation tries to show: 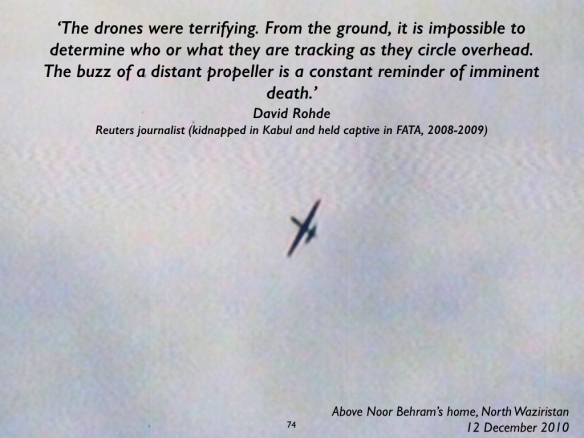 Here too, surely, is traumatic earliness.  (I’ve discussed this in more detail in ‘Little Boys and Blue Skies’ [DOWNLOADS tab], and I’m indebted to Neal Curtis, ‘The explication of the social’, Journal of sociology 52 (3) (2016) 522-36) for helping me to think this through).

And then, after the explosion – the shocking bio-convergence that in an instant produces the horror of meatspace – the violence endures: stored in the broken buildings and in the broken bodies.  In the Second World War (again as I show in ‘Modern Wars and Dead Cities’) the landscape was made strange every morning: buildings newly demolished, people driven from their homes and their workplaces, roads blocked by hoses and ambulances, by craters and unexploded bombs, rescue workers still toiling in the rubble to remove the dead and the injured, hospitals still treating and caring for the casualties. 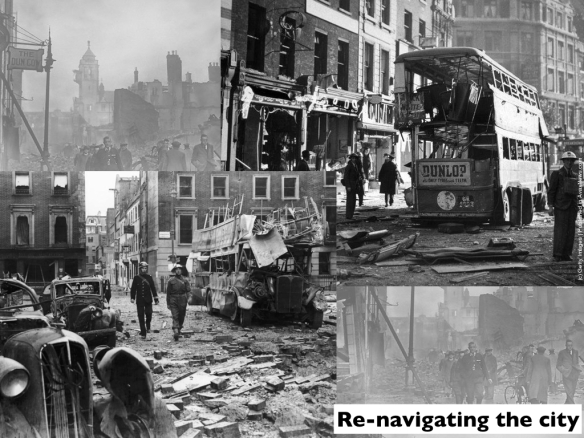 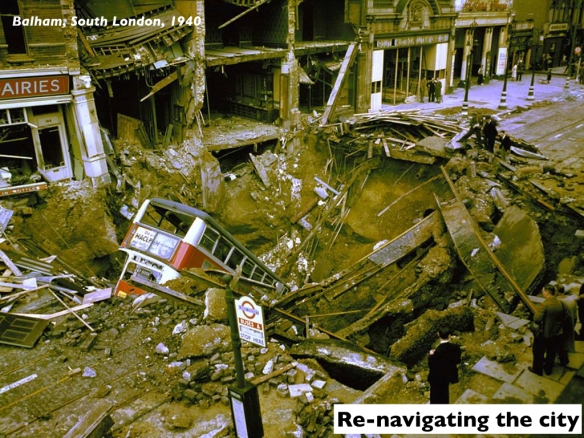 And the violence of a drone strike lingers too: not on the same scale, but still the destroyed houses, the burned-out cars, the graves of the dead and above all the traumatized survivors (and their rescuers), some of them forced into newly prosthetic lives (see here and here).  The explosion is instantaneous, a bolt from the blue, but the pain, the grief and the scars on the land and the body endure.

These effects have a horizon that is not contained by any carefully calculated blast radius.  The grief spirals out through extended families and communities; and – depending on the target – so too do the casualties.  As I’ve said before, power stations in Gaza or Iraq have been targeted not for any localised destructon but because without power water cannot be pumped, sewage cannot be treated, food (and medicines) stored in refrigerators deteriorates.  And hospitals have been systematically targeted in Syria to deny treatment to hundreds and thousands of sick and injured:

The work of enumerating and plotting air strikes, in the past or in the present, is immensely important.  But those columns on graphs and circles on maps should not be read as signs of an episodic or punctiform violence.