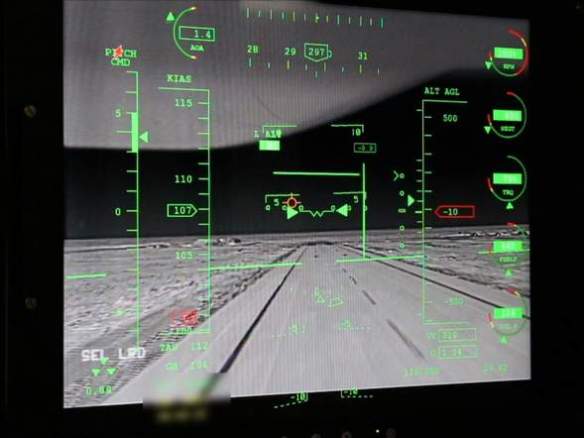 Sky News has a report on Launch & Recovery crews responsible for US/UK drone operations against IS in Iraq and Syria based “somewhere in the Middle East”.

Much of it will be all too familiar to most readers:

In the words of the American officer I speak to, “we are the unblinking eye”…

In many cases there is more than one asset on that individual.

“You know where he goes, his associates.

“That’s all about building that picture so that we know and we can project when he’s going and where he’s going to be.”

But the video embedded in the report repays close attention, not least for the brief glimpses of the video feeds from the drones themselves.

The first two images (above) are clips from the video used by the pilot to control the aircraft – a view of the runway before take-off and an airborne view before control is handed off to the crew who will fly the assault mission from ground control stations in either the US or the UK – while the third (below) is from the imagery used to identify a ‘possible target’.  The comparison between this last image and the equally ‘High Definition’ imagery released from an Italian MQ-9 Reaper late last year is instructive: see my post here.

You can find updates on the UK campaign in Iraq and Syria at Drone Wars UK here and here.

As Chris Cole reports there, too, the use of remote platforms [RPAs] to strike targets in Afghanistan has increased dramatically following the draw-down of US and NATO forces: 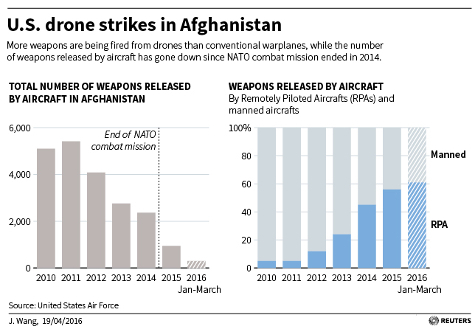 It is surely not coincidental that last month the US Air Force renamed eight of its RPA reconnaissance squadrons ‘attack squadrons’:

‘Eight RPA reconnaissance squadrons [based at Holloman AFB in New Mexico, Whiteman AFB in Missouri, and Creech AFB in Nevada] will be redesignated as attack squadrons [and]… Air Force Chief of Staff Gen. Mark A. Welsh III authorized RPA aircrews to log combat time when flying an aircraft within designated hostile airspace, regardless of the aircrew’s physical location.

The changes were two of many recommendations that emerged as part of Air Combat Command’s Culture and Process Improvement Program, which seeks to address a number of issues affecting operations and the morale and welfare of Airmen across the RPA enterprise….

“Aerial warfare continues to evolve. Our great RPA Airmen are leading that change. They are in the fight every day,” Welsh said. “These policy changes recognize the burdens they bear in providing combat effects for joint warfighters around the world.”’