It’s a book which seems to me to become ever more relevant, and also connects in all sorts of ways with Eyal Weizman‘s Forensic Architecture project.

If you don’t know it, there’s a helpful interview with Andrew at Rorotoko here:

What if the destruction of architecture was understood to be just as complicated, just as culturally resonant, and just as open to interpretation as architecture itself—or, indeed, as any other cultural form? This is the question that Violence Taking Place considers.

The salience of the question emerges from dominant perspectives on destruction, in public culture and the social sciences alike, which often insist on it as either a simple rational act, reducible to the intentions of its author, or an irrational act, completely escaping interpretation at all. What these perspectives each block, in equal but opposites ways, is consideration of the cultural labor that destruction performs—as a social performance, a spatial practice, an object of narrative and a figure of collective imagination.

Of particular relevance to my own work, is this passage:

Much of Violence Taking Place appears to be dedicated to violence “over there,” apparently far away—politically if not geographically—from most readers in the Global North.

But in one section of the book, a supplement on NATO’s 1999 air war against Serbia, I suggest that architecture functioned in that war in just the same way as it functioned on the ground in Kosovo—as a way to make manifest otherwise inchoate or invisible presences. For NATO, those presences were the Serbian “war machine,” “command-and-control system,” “military network,” and “infrastructure”—the explicit targets of NATO’s violence. Yet those targets were made available to NATO and subject to destruction by representing them architecturally, as the different sorts of buildings which came to be included in NATO’s every-expanding “target set.”

At the same time, the representation of targets as architecture and not as human beings allowed NATO to leave the human targets of its bombing campaign—both members of Serbian armed forces and civilians alike—unrepresented. NATO represented its war by images like videos shot by cameras mounted on precision-guided weapons or by surveillance photographs that showed buildings before and after they were attacked.

But these images displaced other images and even knowledge of other destruction, inflicted on human beings whose injury or death was only noted as “collateral damage.” Human bodies were often violated in the course of violating buildings; in these cases, then, the videos shot by precision-guided weaponry were snuff films screened as architectural studies.

Think about that last clause… and compare it with the unruffled commentary on US satellite imagery (1960-1999) from the National Security Archive here, which focuses on the ‘burdens’ imposed on image interpreters and the degradation of the images when released to the public (see below). 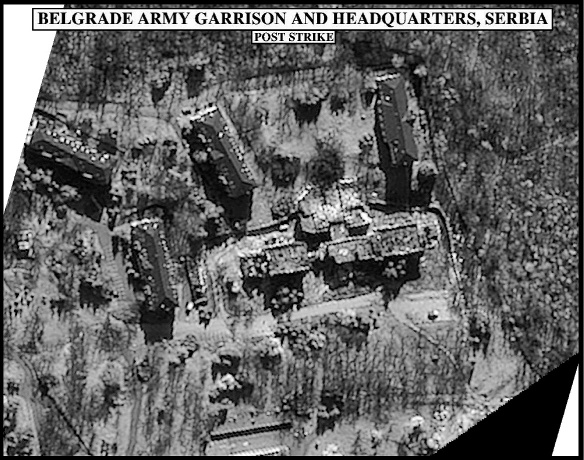 I rehearse all this because Andrew has returned to these and related issues around militarised vision in a spell-binding essay in Public Culture 26: 3 (2014) 46-500: ‘Surveillant witnessing: satellite imagery and the visual politics of human rights’.

I’ve written about ‘remote witnessing’ before – see here and here – and argued that it ‘requires difficult, painstaking work in multiple registers because the imagery does not speak for itself’ and that it must become ‘a multi-modal, highly mediated structure of testimony, inference and evidence: always situated, inescapably precarious, and absolutely vital.’  Without that, there is the ever-present danger that, in Andrew’s words, the act of remote witnessing becomes ‘action without acting’.

I based these claims, in part, on the Satellite Sentinel Project, which is also one of Andrew’s foci, but he places it in a carefully constructed genealogy that opens up the complicities between the surveillance state and human rights geo-witnessing.

One of Andrew’s most provocative arguments concerns what he calls the ‘imaginative geography’ performed and sanctioned through satellite imaging:

Human rights satellite imaging takes place within a geography of closed territories and open skies—the geography of a world in which repressive regimes can prevent reporting of any human rights abuse and surveillance satellites can report freely on every such abuse….

The binary opposition that underlies such accounts— closed territory / open sky — speaks to what Edward Said (1978) called an imaginative geography. In human rights advocacy, this is a geography in which the satellite gaze makes a place for itself by negating the gaze of on-the-ground witnesses—the same geography, of course, that underlay satellite surveillance from the Cold War through the Iraq War. On one side, this geography ignores the local and sometimes transnational or international human rights organizations whose reports provide the basis for satellite examination in the first place. These reports evince the human rights issues that satellite imagery is recruited to corroborate. Satellite images themselves, then, do not reveal or expose secret spaces: they revisualize a prior revelation. The secrecy that the satellite image dispels is therefore only partial or fragmented—it’s a secrecy that exists for certain publics and not for others.

On the other side, this geography ignores the status of satellite imagery as at once corporate property and the subject of a dense constellation of national laws and policies. In the United States, the government has attempted to maintain control of commercial satellite imagery by reserving a right to “shutter control,” or to restrict imagery, in order to protect “national security” or “foreign policy interests”; by instituting various time restrictions determining the release of imagery; by denying commercial licenses for certain sorts of high-resolution imagery; and by maintaining the right to “censorship by contract,” or the purchase of all output from a satellite for a specified period of time (Campbell 2008: 23). A geography of closed territories and open skies thus denies both the openings to repressive states made by on-the-ground human rights advocates and the closures of the sky structured by corporate practice and national law and policy. Both denials serve to stage the surveillance witnessing conducted by satellite imaging systems as a privileged view on human rights abuses, providing a monopoly on the discursive construction of the human rights abuse to those human rights organizations with access to satellite imagery.

But I wonder if it really is the case that the satellite gaze necessarily ‘negates the gaze of on-the-ground witnesses’?  It may well, of course, and Andrew is right to draw our attention to the way in which the framing of these images works to interpellate the viewer.  In particular, he suggests that the seeming objectivity of satellite imagery – or at any rate its politico-technical erasure of ‘subjectivity’ – is part of its extraordinary panoptical power that can simultaneously produce an apolitical viewing subject.

But this is conditional – see, for example, my discussion of Human Rights Watch‘s report on chemical weapons attacks in Damascus; equally, Forensic Architecture‘s brilliant work with satellite imagery surely shows that there is nothing necessary about these reductions (though constant vigilance is clearly the order of the day).

That said, Andrew’s root concern is that ‘in the current global order, violence inflicted in the name of human rights can look similar or identical to violence whose infliction is categorized as a human rights abuse.’  And that is perhaps the most important sentence in an extremely important essay.